With neither money nor mentors to fall back on, higher ed can be more dream than reality for low-income students 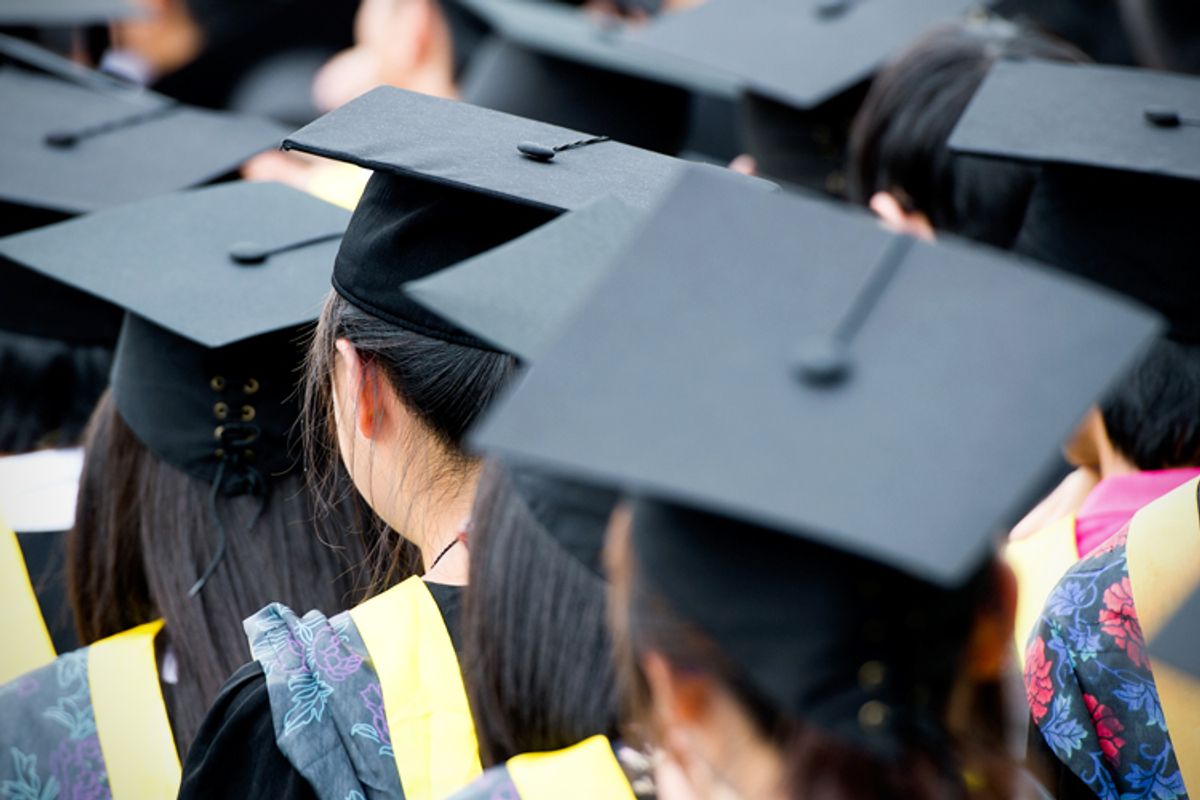 Sometimes, an incoming student can find herself so close to fall registration, with no foreseeable way of paying her outstanding balance, that she'd be willing to sign over anything short of her firstborn just to enroll. Fine print unread, credit rating be damned.

This was my approach to undergrad: If debt was what it would take to become a writer and, eventually, a professor of writing, so be it. Like many students taking out college loans in the '90s, I figured I'd land a job quickly and begin paying down the debt straightaway. But my route has been far more circuitous -- and this has been, in part, due to being the first in my household to finish a four-year program.

Ever since college education has been a possibility for black Americans, many of our parents have spurred us toward institutions of higher learning, regardless of whether they were able to attend themselves. First-generation college students, who now account for nearly 30 percent of incoming U.S. freshmen, have a tougher go of it. There are things you learn too late when the pursuit of higher education is both an expectation and an abstraction. How to finance a four-year degree with minimal debt may be one of them.

When we examine factors of the student loan debt crisis, we need to discuss the ways in which being a first-gen college student impacts the accruing of education debt -- especially if that student is low-income, working-class and/or a minority. Low-income first-generation freshmen account for 24 of the 30 percent total.

After graduating with a bachelor’s degree in English and while waiting to make money as a writer, I worked office and freelance jobs: proofreader for an ad agency, editorial coordinator for a comic book newsletter, unpaid writer-for-non-hire. It had always been my plan to attend grad school, but I spent four years working before applying. During that time, my mother was divorcing and any money I might've saved toward financing a master's degree went toward paying for housing and living expenses for her and for myself.

I was raised with an understanding that I would always need to incur debt to get from point A to point B. For my family, the impact of the racial wage gap has been considerable: Any bout of unemployment, underemployment or unforeseen hardship would result in the economic equivalent of tornado damage, all savings wiped out quickly, any rebuilding a matter of plunging deep into the red.

With this in mind, I've largely avoided credit cards, figuring all my debt should be reserved for degrees. I had every intention of earning at least two. I was no wiser about the second than the first: I earned an MFA from a school just as pricey as my undergrad institution.

Just as "go to college" messaging is indelible, if abstract for first-gens, so is the idea that you can pursue whatever career you’d like, as an inheritor of the American dream. Old rhetoric dies hard. It can take years to discover that every educational and career path you’ve trod is one rigged with detours for those who aren’t born into financial privilege. Both writing and academia are professions that favor the wealthy. Those of us attempting to clamber up those ladders with student loan debt and low income are in for a rude awakening. The rigors particular to this brand of upward mobility are among those expressed in "Laboring Positions: Black Women, Mothering, and the Academy," an anthology penned by professors at various stages of their academic careers, who all started their journeys with varying levels of preparedness.

At 33, I’m finally working consistently in both fields for which I accrued thousands of dollars in student loan debt to become qualified. I’ve worked as an adjunct professor of English for six years and as a paid freelance writer for just as long. Neither position, however, affords me nearly enough income to live comfortably, let alone to repay my student loan debt in anything approaching a manageable way.

There are things I could’ve done differently, to be sure, and I would’ve known what they were, as a first-generation college student, with mentorship tailored to my challenges. Such mentorship is becoming more widely available to incoming students now. And it will be imperative going forward, as the number of first-generation students increases and the amount of federal aid allocated increases. As a nation, we can steer students away from later financial crises by properly preparing them for what economic hardships await them if they choose to buy into the same American dream wealthy parents are able to purchase for their children.

This is part of the instruction I offer my incoming community college students when they express interest in pursuing four-year degrees. Many of them, already working in full-time jobs or raising children, are wiser than I was in my own late teens and early 20s. They're thinking smarter about where to attend college -- less dream school, more state university -- and about which degrees will yield them a livable wage. I don't dissuade them; in our current economy, this is the best possible course for a student who needs to up his or her earning power. But I also don't let go of the hope that someday, pursuing a life of the mind won't be secondary to making seven figures when students from any class, race or circumstance are choosing what and where to study. If this country is to continue producing diverse and dynamic intellectuals, this is an American dream we cannot afford to forsake.