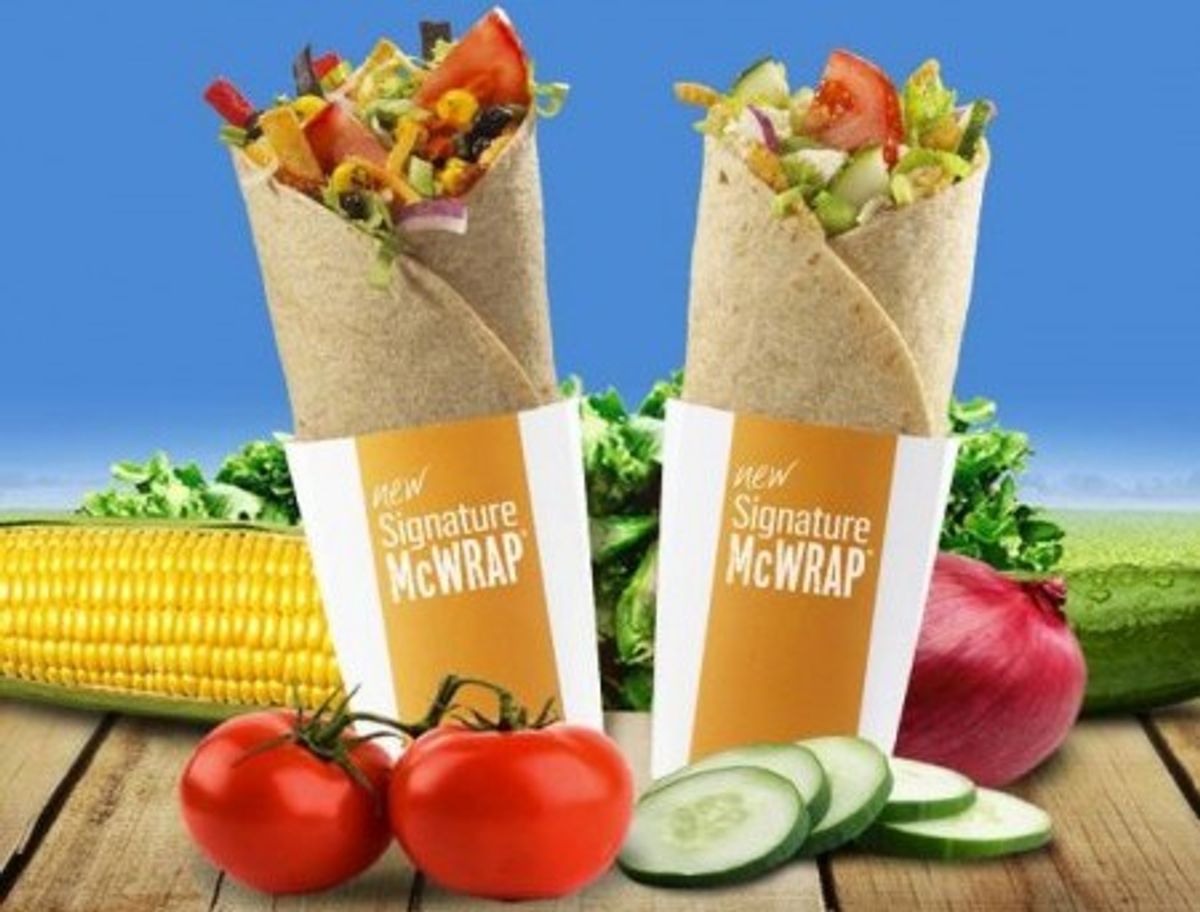 Aside from maybe not being a very good place to work, McDonald's has never been very welcoming to vegetarians. People who forgo meat for either health or environmental reasons are probably better off avoiding the chain anyway (Mark Bittman recently did a long rundown on better fast food options), but it's always nice to feel included. And the Dollar Menu definitely does not represent the five percent or so of Americans who call themselves vegetarians.

New veggie wraps, debuting in Canada, will be the first vegetarian entrees for offer since the failed veggie burger experiment of 2002 to 2004. The Huffington Post breaks down what's inside:

The Mediterranean wrap is stuffed with garlic hummus, feta cheese, tomatoes, cucumber, red onions, lettuce and a feta-based sauce, while the the Santa Fe wrap features tomatoes, roasted corn, black beans, a blend of cheddar and Monterey Jack cheese, red onions, lettuce, tortilla chips, chili lime glaze and a Southwest-inspired sauce. Both are made with a whole wheat tortilla.

That last part is kind of an ironic grasp at the health market, since, as The Toronto Star points out, the wraps are comparable, fat- and calorie-wise, to a Big Mac. The Sante Fe wrap actually racks up more Weight Watchers points than the burger. “I think it still goes to the story of variety in moderation,” John Betts, McDonald’s Canada president and chief executive officer, told The Star. “It’s a meatless option and not all meatless options have to be devoid of flavor and taste.”

Betts also commented to Canada's National Post that wraps feel more contemporary than veggie burgers, which is probably true. As a vegetarian, it's always nice to see some creative effort put into meatless fare. Vegans, alas, are still out of luck. So are Americans, for now, although a U.S. spokeswoman told The Huffington Post that ordering chicken wraps without the chicken (and extra vegetables) is always an option. So, of course, is just eating somewhere else.