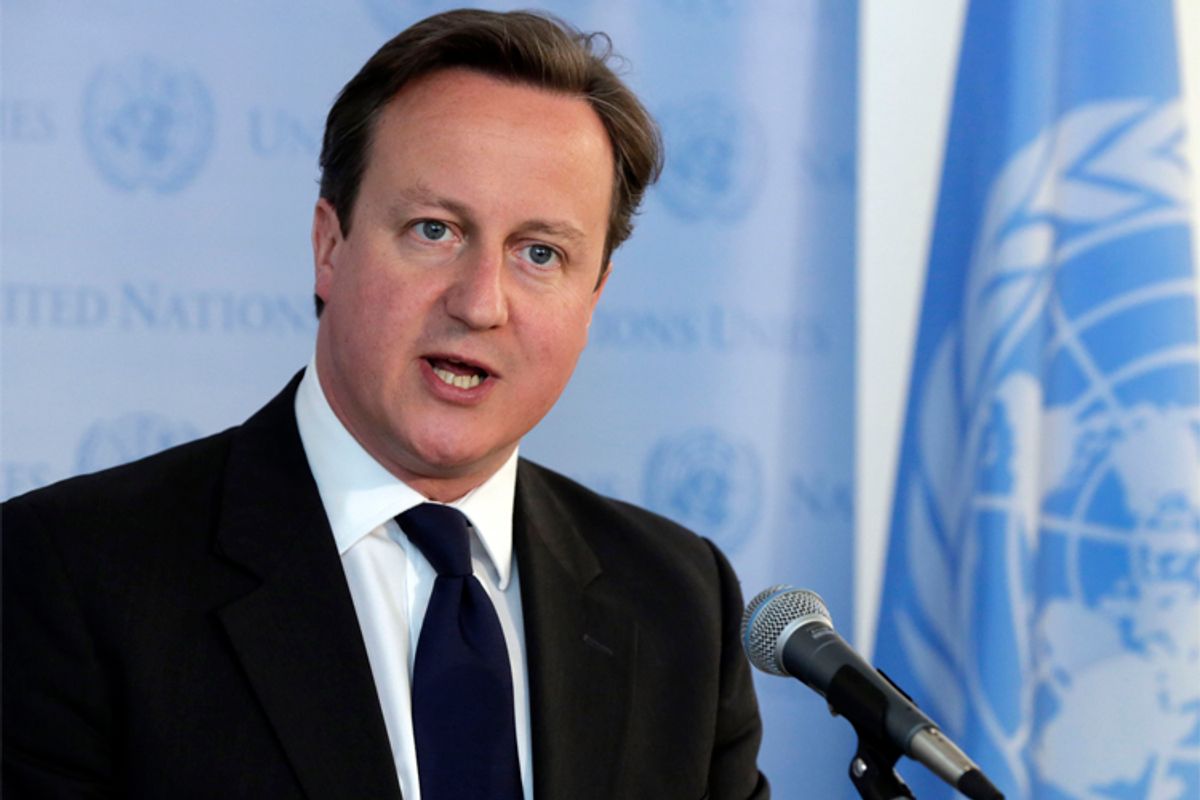 WASHINGTON (AP) — President Barack Obama on Thursday prepared for the possibility of launching unilateral American military action against Syria within days as Britain opted out in a stunning vote by Parliament. Facing skepticism at home, too, the administration shared intelligence with lawmakers aimed at convincing them the Syrian government used chemical weapons against its people and must be punished.

Despite roadblocks in forming an international coalition, Obama appeared undeterred and advisers said he would be willing to retaliate against Syria on his own.

Even before the vote in London, the U.S. was preparing to act without formal authorization from the United Nations, where Russia has blocked efforts to seek a resolution authorizing the use of force, or from Capitol Hill. But the U.S. had expected Britain, a major ally, to join in the effort.

Top U.S. officials spoke with certain lawmakers for more than 90 minutes in a teleconference Thursday evening to explain why they believe Bashar Assad's government was the culprit in a suspected chemical attack last week. Lawmakers from both parties have been pressing Obama to provide a legal rationale for military action and specify objectives, as well as to lay out a firm case linking Assad to the attack.

A number of lawmakers raised questions in the briefing about how the administration would finance a military operation as the Pentagon is grappling with automatic spending cuts and reduced budgets.

Sen. Jim Inhofe of Oklahoma, the top Republican on the Armed Services Committee and a participant on the call, said in a statement that the administration presented a "broad range of options" for dealing with Syria but failed to offer a single plan, timeline, strategy or explanation of how it would pay for any military operation.

Rep. Howard "Buck" McKeon, R-Calif., chairman of the House Armed Services Committee and a call participant, told reporters that administration officials are in the process of declassifying the evidence they have of the Syrian government using chemical weapons.

"When they do that, we'll understand. But it's up to the president of the United States to present his case, to sell this to the American public. They're very war weary. We've been at war now for over 10 years," McKeon told reporters at a post-call news conference at his office in Valencia, Calif.

It remained to be seen whether any skeptics were swayed by the call, given the expectation in advance that officials would hold back classified information to protect intelligence sources and methods.

"The main thing was that they have no doubt that Assad's forces used chemical weapons," New York Rep. Eliot Engel, top Democrat on the House Foreign Affairs Committee and a supporter of Obama's course, said after the briefing.

But he said the officials did not provide much new evidence of that.

"They said they have (intercepted) some discussions and some indications from a high-level official," he said, and that they possess intelligence showing material being moved in advance of the attack.

He called the tone "respectful. There was no shouting. No one was accusing the administration of doing anything wrong."

Sen. Bob Menendez, D-N.J., chairman of the Foreign Relations Committee, said the briefing "reaffirmed for me that a decisive and consequential U.S. response is justified and warranted to protect Syrians, as well as to send a global message that chemical weapons attacks in violation of international law will not stand."

In London, Prime Minister David Cameron argued a military strike would be legal on humanitarian grounds. But he faced deep pressure from lawmakers and had already promised not to undertake military action until a U.N. chemical weapons team on the ground in Syria released its findings about the Aug. 21 attack.

The prime minister said in terse comments after the vote that while he believes in a "tough response" to the use of chemical weapons, he would respect the will of the House of Commons.

Caitlin Hayden, Obama's National Security Council spokeswoman, said the U.S. would continue to consult with Britain but Obama would make decisions based on "the best interests of the United States."

It was not certain the U.S. would have to act alone. France announced that its armed forces "have been put in position to respond" if President Francois Hollande commits forces to intervention against Syria. Hollande does not need French parliamentary approval to launch military action that lasts less than four months.

Obama discussed the situation in Syria with House Speaker John Boehner, R-Ohio, who wrote to the president earlier this week seeking a legal justification for a military strike and the objectives of any potential action.

Assad, who has denied using chemical weapons, vowed his country "will defend itself against any aggression."

Some of the U.N. chemical weapons experts will travel directly from Syria on Saturday to different laboratories around Europe to deliver "an extensive amount of material" gathered, U.N. spokesman Farhan Haq said. While the mandate of the U.N. team is to determine whether chemical agents were used in the attack, not who was responsible, Haq suggested the evidence — which includes biological samples and witness interviews — might give an indication of who deployed gases.

Obama and other top officials have not revealed definitive evidence to back claims that Assad used chemical weapons on Syrians. U.S. officials say the intelligence assessments are no "slam dunk," with questions remaining about who actually controls some of Syria's chemical weapons stores and doubts about whether Assad himself ordered the strike.

The officials spoke on condition of anonymity because they were not authorized to discuss the intelligence publicly.

"It is important for the Assad regime and other totalitarian dictators around the world to understand that the international community will not tolerate the indiscriminate, widespread use of chemical weapons, particularly against women and children as they're sleeping in their beds," he said.

But many Congress members were pressing Obama to explain the need for military action and address fears that such a move might draw the U.S. deeper into the Syrian civil war.

The White House has not responded directly to Boehner's letter seeking more answers about Syria operations and the speaker's office appeared unsatisfied after the president's call Thursday.

"Only the president can answer these questions, and it is clear that further dialogue and consultation with Congress, as well as communication with the American public, will be needed," Boehner spokesman Brendan Buck said.

Washington Rep. Adam Smith, senior Democrat on the House Armed Services Committee, cautioned that an attack might be ineffective and might draw the United States into the Syrian civil war, now in its third year.

"Simply lashing out with military force under the banner of 'doing something' will not secure our interests in Syria," Smith said in a statement.

Thursday's briefing for lawmakers was expected to include only unclassified intelligence, meaning that key details that could more clearly link Assad to a chemical attack might not have been part of it. A similar intelligence report is also expected to be released publicly on Friday.

Obama continued making his case for a robust response to world leaders, speaking Thursday with German Chancellor Angela Merkel. With national elections scheduled in Germany for next month, Merkel is unlikely to pull her country into a military conflict.

Obama has ruled out putting American forces on the ground in Syria or setting up a no-fly zone over the country. He's also said any U.S. response to the chemical weapons attack would be limited in scope and aimed solely at punishing Assad for deploying deadly gases, not at regime change.

"We do have to make sure that when countries break international norms on weapons like chemical weapons that could threaten us, that they are held accountable," he said during a television interview.

The most likely military option would be Tomahawk cruise missile strikes from four Navy destroyers in the eastern Mediterranean Sea. At a minimum, Western forces are expected to strike targets that symbolize Assad's military and political might: military and national police headquarters, including the Defense Ministry; the Syrian military's general staff; and the four-brigade Republican Guard that is in charge of protecting Damascus, Assad's seat of power. Assad's ruling Baath Party headquarters could be targeted, too.