The Secretary of State tells us what "we know" and takes pains to stress this is not Iraq. But it's not that simple 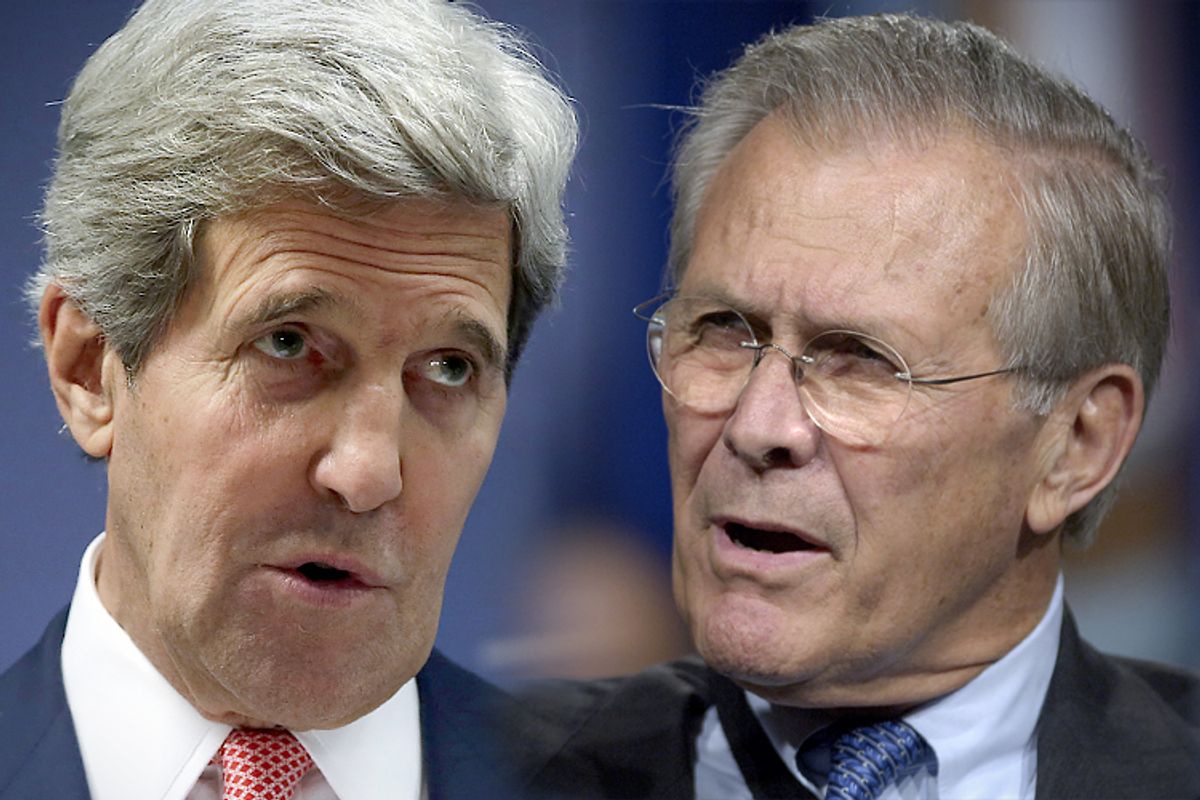 "We know...We know... We know." So went the refrain of Secretary of State John Kerry's statement to the public Friday -- a soaring, rhetoric-infused war cry to justify action against Assad's regime in Syria.

Claims to knowledge, intelligence and transparency: the Obama administration is making no small effort to counterpose this case for war to the "known unknowns" that underpinned arguments for the Iraq War.

But Kerry's claim to knowledge doesn't stand in too stark contrast to some Bush-era statements about WMDs in Iraq. As Steven Pinker pointed out in his book "The Stuff of Thought," the semantics of the argument from Hussein's WMDs were regularly couched in statements about what the intelligence community had "learned."

One report at the time, for example, read: "The British government has learned that Saddam Hussein recently sought significant quantities of uranium from Africa."

But "to learn," like "to know," is a factive verb -- one that carries with it the assumption of truth. Kerry had to go further than an appeal to "knowing" to distinguish this war cry from those that led us into the disastrous Iraq fray. And so, Kerry made the comparison explicit: The administration is "More than mindful of the Iraq experience," said Kerry. "We will not repeat that experiment," he promised.

And more so than other military actions in recent years, this is a case for war based in the rhetoric of facts, figures and details about the Assad regime's use of chemical weapons. Both Kerry's speech and the four-page unclassified report released to the public Friday played heavily on detail: Date: August 21; Time: "2.30 a.m."; Numbers: 1,429 dead, including 400 children; "thousands of reports...at least 12 locations."

"We know," repeated Kerry. But have we forgotten that old axiom -- the fallacy of deriving an "ought" directly from an "is"? Telling Americans what "we know" is insufficient in accounting for what we should do. While Kerry relied on some paroxysmal public outrage in response to the horrific facts of a chemical weapons attack ("read for yourselves," Kerry urged), his comments about moving from fact to action were little more than a vague but emotive appeal to action in the face of evil.

What "we know," according to the Obama administration, is the case for war. But surely we know too that the U.S. continues to send aid to the Egyptian army, which has carried out three massacres in so many weeks, killing hundreds of Islamist protesters.

What "we know" about the Syrian attack, the facts cited by Kerry and in the administrations unclassified report, fails to account for the complex nexus of geopolitical relations that mean some facts of despotic horror get to be arguments for war, others just get to be.

In an essay I have regularly cited about this government's claims to transparency, Sarah Leonard spoke of the "ideological incoherence" of the administration's approach to information and secrecy. The Obama White House has made a habit of releasing swamps of details and facts relating to government activity, while operating a "regime of secrecy" about the actual executive operations. "We know," we are told, that Assad used chemical weapons to kill 1,429 civilians -- we don't know from these details what the objective is for a U.S. incursion in Syria, nor whether it is legally justified. Geopolitics are never so simple as a number of dead or a principled stand against chemical weapons -- while Kerry's impassioned rhetoric attempted to suggest otherwise.