No one wants it, but we'll have a little war anyway

Britain won't be joining a strike against Syria and huge majorities of Americans oppose it. It doesn't matter 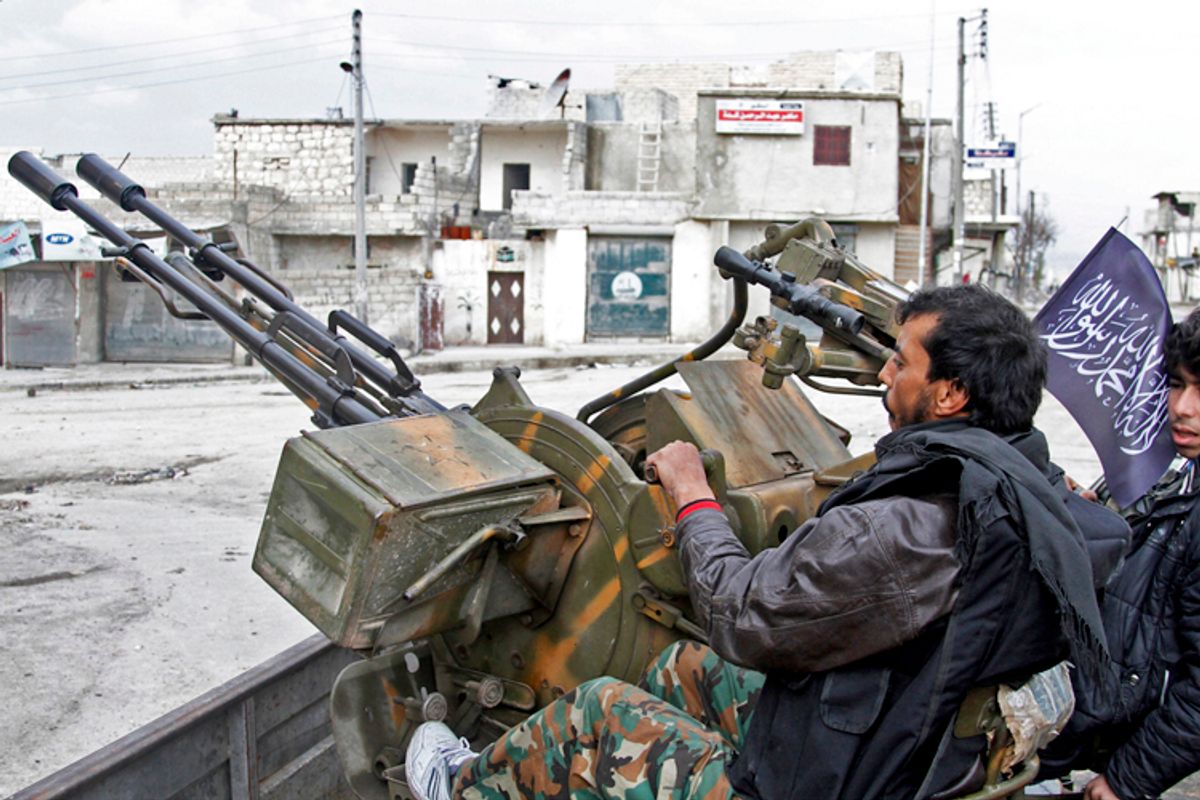 Barack Obama is president now because he opposed a war, from the start. I imagine Ed Miliband knows this. I think he also knows that his Labour colleague Tony Blair is among the most reviled people in Great Britain, a nation that really knows how to revile. So Miliband, the leader of the U.K. opposition, blocked a vote in the House of Commons on using military force against Syria, enraging Prime Minister David Cameron and likely pleasing the majority of Britons who are opposed to action.

Cameron, or at least a Cameron spokesman, called Miliband a bunch of very mean names, but he should perhaps direct his wrath at Blair and George W. Bush. If the Western liberal interventionists can't get their nice little humanitarian bombing mission through the democratic process, well, who do you suppose they have to blame? Maybe don't spend a decade incompetently trying to remake Iraq and Afghanistan through force and then leaving both nations in shambles if you still want everyone to be gung-ho about military intervention. This is, all in all, a good argument for a parliamentary system -- two presidential system nations now plan to go ahead with a strike without the support of the elected representatives of the will of the whole people -- but just about everything in American politics over the last decade has been a good argument for a different system.

I don't think there's any doubt that if this were the 1990s, the entire Western community (Western Europe and us) would already be bombing by now, likely without much public or political outcry. But the Iraq nightmare, from the cooked intelligence to the shifting rationales to the horrific occupation to the inevitable slinking away in defeat, ruined the whole game. It's a lot harder now to pretend that dropping bombs on far-off lands can ever be neat, "surgical" and strictly "humanitarian." (And dear U.K. Defense Secretary Philip Hammond, this is not helping your case much.) Now the U.K.'s out, and if (when) the U.S. and France go at it, it will likely be without the approval of the United States Congress. (Though you never know, Congress can usually be brought around to supporting a war. The Senate mostly loves the idea already. It's just a question of whether the White House wants to bother waiting for a vote.)

The antiwar left has some small reason to be grateful for Blair and Bush, for making the citizens of two countries much more dovish, to the point that even a "limited" missile strike campaign is politically toxic. Whether you support a campaign or not, what the president is planning is vastly different, in its scope and its goal, from Iraq. But Americans don't care. They're just done. But opposition to war, like support for soaking the rich, is one of those widely popular policies that seldom trickle up to elite elected officials. Our antiwar president (who was never actually antiwar, we all know this, right?) is leading the current charge. It's not hard to imagine that a Prime Minister Miliband, as opposed to an opposition leader Miliband, would be right there with him.

At the moment there barely is an antiwar movement in the United States. There is instead a widespread but unorganized opposition to war. No one wants this. It'll likely happen anyway. Unless things escalate drastically, though, a Syria campaign probably won't create the conditions for a future Obama to stake out an opportunistic left-wing position and ride it to the presidential nomination in 2016. Americans won't be dying by the hundreds and we won't be committing ourselves to a drawn-out and bloody occupation. (Well, let's hope we won't be, I guess.) We're going to launch missiles for a few days and then quit, according to the latest plans. That's not quite a war you can hang a presidential campaign on. Probably not even a congressional campaign.

Right now liberals (and the political press) are letting people like Rand Paul meet the demand for America to have a less "muscular" foreign presence. (This isn't really surprising: Liberal antiwar voices are pretty much always marginalized in the United States, by both hawkish Democrats and the press,) The right-wing interventionists are terrified at how much his position resonates with people. But I'd put money on the next presidential election involving two supporters of military action against Syria

The American popular attitude against war isn't quite an expression of moral disgust as much as it is just a feeling that we shouldn't be messing around in other countries when we have plenty of problems here at home. As long as America has vested economic (and "security") interests in other countries, though, we're gonna keep messing around. The next president will continue messing around. The next Congress will either support the president or they'll decline to stop her or him. The best long-run strategy might be trying to reengineer the American government to be more responsive to the actual desires of the people.