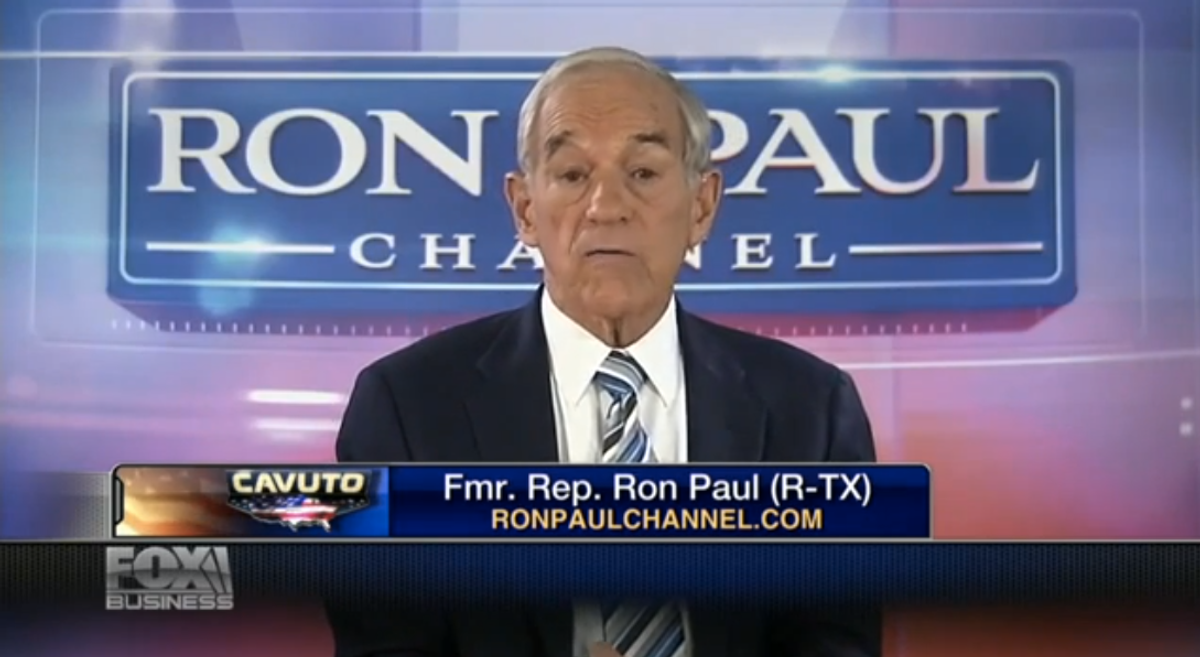 Former Rep. Ron Paul does not just oppose a potential military intervention in Syria, or think the government is exaggerating the case for war, or think we're moving too quickly, but thinks the government is outright lying -- "I think it's a false flag," he says, invoking the favorite phrase of conspiracy theorists everywhere.

"[Syrian President Bashar al] Assad, I don't think is an idiot. I don't think he would do this on purpose," Paul told Fox Business host Neil Cavuto of the allegation that Assad used chemical weapons on civilians.

"Oh, so you question whether  Assad even used the gas, of if he's just being set up?" an incredulous Cavuto responded.

"Yeah, just look at how many lies were told us about Saddam Hussein prior to that buildup. More propaganda. It happens all the time," Paul replied. "I think it's a false flag. I think really, indeed. And nobody knows if indeed he was slaughtering people by the thousands with poison gas. If he was that's a different story, but that's not the case."

"The implication is that Assad committed 100,00 killings -- there are a lot of factions out there. Why don't we ask about the Al Qaeda? Why are we on the side of the Al Qaeda?" he added.

Paul spoke before he saw the unclassified intelligence assessment released today by the White House, so perhaps he would change his mind with the new data. But we're guessing not.

Last summer, Paul took to the House floor to tell the warmongers to leave Syria alone. "Falsely blaming the Assad government for a so-called massacre perpetrated by a violent warring rebel faction is nothing more than war propaganda," he said.

And he could be right, of course. The rebels have been accused of using chemical weapons and there's some evidence they have, even though the administration says they found no evidence of it.

Paul's old buddy Alex Jones seems to be with him on this. InfoWars is blaming the rebels for last week's chemical weapon attack, and accusing Secretary of State John Kerry of inflating the number of dead.

For what it's worth, Paul appears to be using the term wrong. "False flags," in the standard conspiracist's lexicon, usually refer to acts of violence perpetrated by the The Powers That Be that get blamed on some other group for the purpose of ginning up support to crack down on said group. Or just to create a general sense of the panic that the government and the Powers That Be can exploit. The Reichstag Fire is the archetypical example. In that case --according to the conspiracist lore -- Nazi agents set fire to the building, blamed it on the communists, and then seized power. In the Syria case, what Paul is describing is more a typical psyops job.