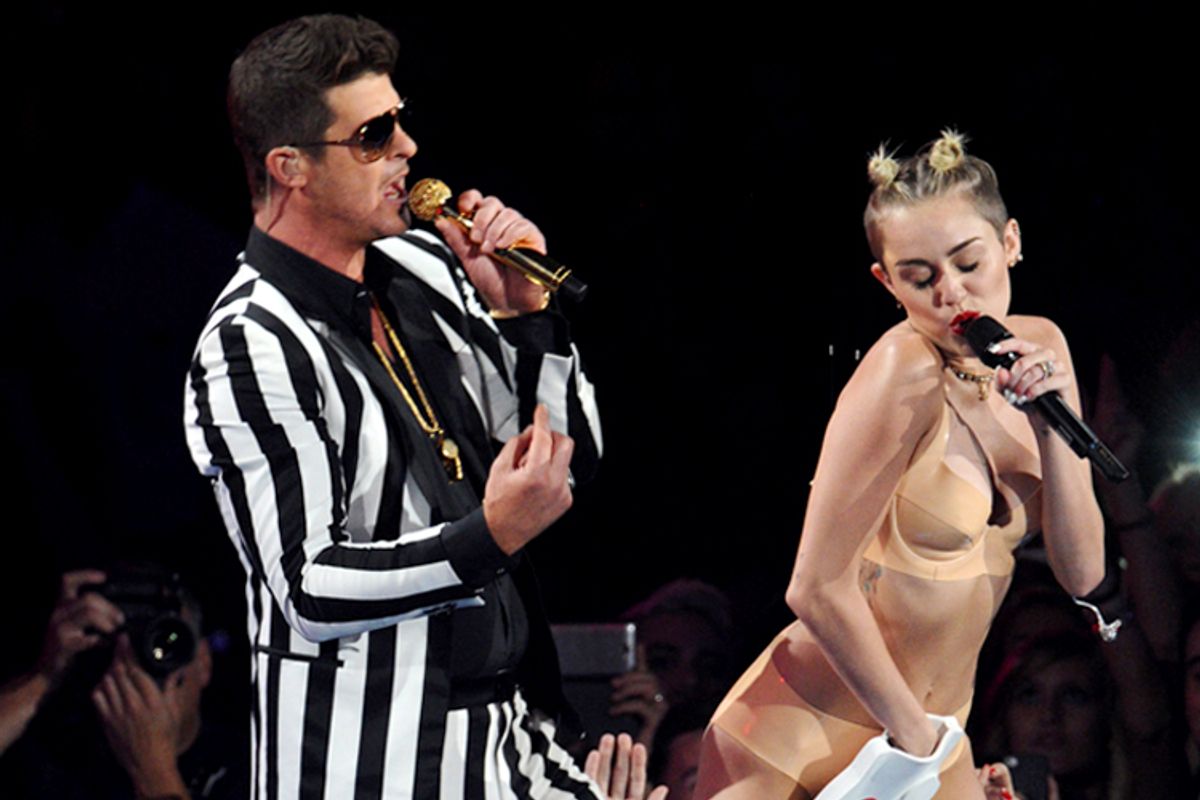 Imagine who might deliver a tirade against the “sexual shamelessness of Lady Gaga,” global warming, the liberal media, Washington elites, political correctness, “Kardashian-style displays of wealth,” and “Clintonian influence peddling.” You probably aren’t imagining a professor of Greek and Roman Classics, usually regarded as one of the tweedier and more buttoned-up academic disciplines. But Victor Davis Hanson, a prominent classical scholar, ancient historian and Hoover Institution senior fellow, has given us exactly that in a blog post for the National Review last week, complete with a picture of Miley Cyrus’ now notorious performance at the Video Music Awards.

True to his training in Classics, Hanson takes inspiration and his title, "American Satyricon," from a venerable ancient text, the "Satyricon" of Petronius, which was probably written in the 60s A.D. and which Hanson describes as “a brilliant satirical novel about the gross and pretentious new Roman-imperial elite.” It is certainly that, but Hanson’s is not the only way to read it. In fact a more careful reading of Petronius’ text tells a different story, not only about the decline of societies like Rome or our own, but about diatribes like Hanson’s.

Hanson focuses on the description in the "Satyricon" of the banquet of Trimalchio, an over-the-top orgy of luxury and excess, which for Hanson embodies the decline of the Roman Empire and provides a cautionary parallel to the jaded self-absorption, immorality and hypocrisy of our own culture. But Hanson fails to account for the lens through which the reader sees this banquet unfold. The "Satyricon" is one of the earliest examples of a first-person narrative, and Trimalchio’s banquet is described not by Petronius but by the novel’s main character, perhaps the first example of what American high school students have learned to call an “unreliable narrator.” This is Encolpius, whose name means something like “Mr. Crotch” and who, by his words and deeds, shows himself to be a pretentious buffoon whose cultural aspirations can’t conceal that he is little more than a strung-out petty criminal suffering from erectile dysfunction.

When Encolpius arrives as a guest at Trimalchio’s house, he falls over in fright at the first sight of the ferocious guard-dog, only to realize that it is only a wall painting, not a real dog. As the party goes on and he misses the jokes, falls for more illusions and embarrasses himself in conversation, the reader begins to sense that Encolpius himself is as much the target of the satire as the banquet  With his inability to separate the real from the apparent, Encolpius is hardly someone we can trust to provide a reliable description of the banquet, let alone to make judgments about its cultural implications.

Such self-delusions don’t stop Encolpius from making such judgments, of course. In the first surviving passage of the work we find him delivering his own tirade against the decline of literary activity in Rome. It’s an eloquent passage stylistically, but the argument reflects only a superficial knowledge of the history of classical literature — we might liken Encolpius’ insistence that it has all been downhill since Sophocles to someone claiming to be a sophisticated literary critic because he admires so uncontroversial a writer as Shakespeare — and relies on a series of clichés that leave us with the impression not that Roman literature has actually declined but that Encolpius is little more than a ranting hack.

So it is ironic when Hanson points to the "Satyricon" as an unproblematic portrait of the decline of a great world power such as Rome or America. It is true that the Romans seem to have been obsessed with their own decline, but of all the discussions of this that survive from antiquity the "Satyricon" is the worst possible text to use as a cautionary parallel for our own cultural moment. Petronius, seeing so many of his contemporaries railing against the moral bankruptcy of his time, already knew what many readers of Hanson might suspect, that there is more going on in such diatribes than a simple description of contemporary ills. Those who deliver them tend to be interested in promoting themselves, in blurring the distinction between what they simply don’t like and what is actually detrimental to a culture, and in concealing a particular political agenda under a veneer of outrage. Encolpius can be seen doing this throughout Petronius’ novel; he looks down his nose at Trimalchio, but it’s hard to tell which of the two of them is more of a boor. The "Satyricon" does not satirize decline; it satirizes those who are predisposed to see decline everywhere they look. It does not satirize the “wealth-obsessed, empty wannabe new elites,” as Hanson thinks it does; it more forcefully satirizes the facile and self-righteous obsession with decline that its narrator practices and that finds a fine modern example in Hanson’s piece.

I don’t know whether America is in decline or whether Miley Cyrus’ performance signals the beginning of the last act in that story. But I doubt whether Petronius would have made someone as risible and self-undermining as Encolpius his spokesman if he had truly believed his own culture was on its last legs. We shouldn’t allow Hanson to speak for ours. Conservatives like Hanson often try to use ancient texts like the "Satyricon" to support their tendentious worldview, but just being old doesn’t automatically make a text congenial to those who don’t like the way our culture is going. Petronius understood that those out of power might want to complain about decline, whether or not it was actually happening. As Hanson himself points out, “Petronius’ world went on for 400 more years.”  We in America should be so fortunate.

Curtis Dozier teaches in the Department of Greek and Roman Studies at Vassar College in Poughkeepsie, NY.