Why sex with presidents is so hot right now

"Scandal" and new book "The First Affair" feature heroines who sleep with the POTUS. A reaction to "having it all"? 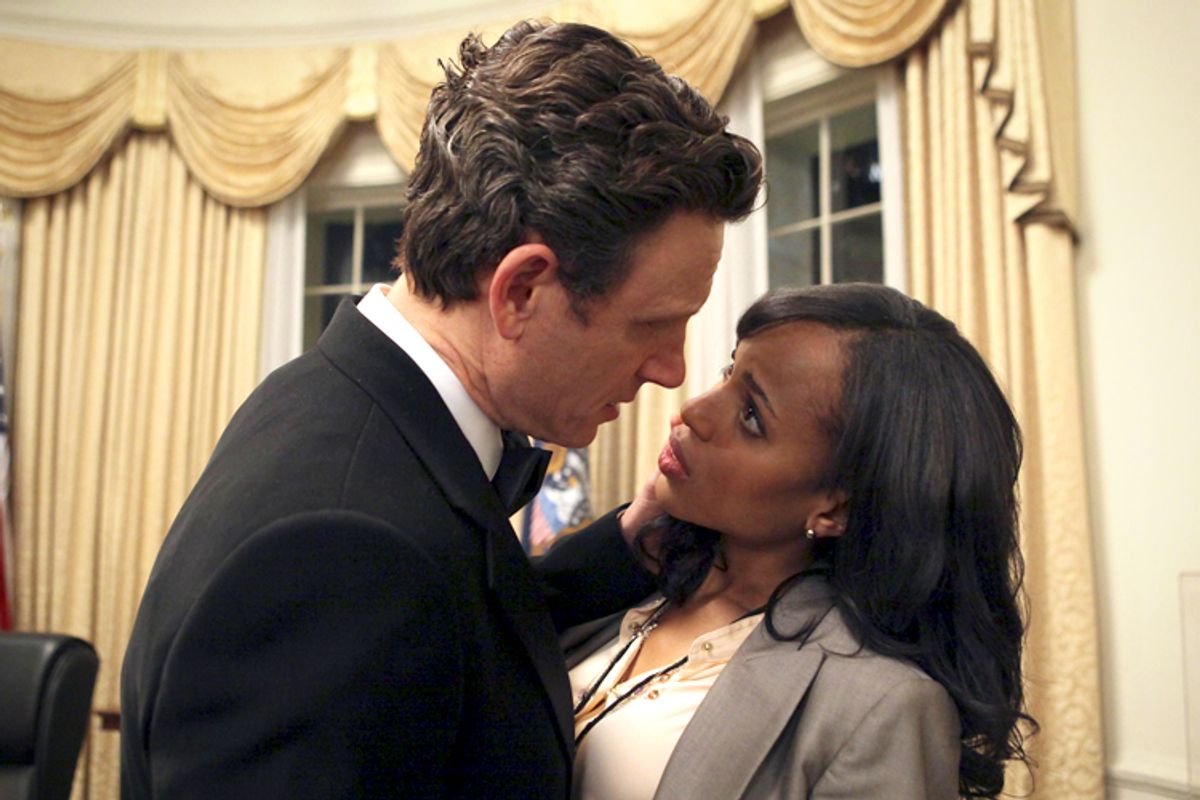 Just as the debate about women "having it all" has come to dominate mainstream culture, another, fictional narrative has risen to prominence: that of women having hot sex with the president of the United States. Shonda Rhimes' "Scandal," which stars Kerry Washington as high-powered D.C. fixer and presidential mistress Olivia Pope, comes back with new episodes on Oct. 3. But fans can get their fix of the same flavor of steamy, Oval Office sex with "The First Affair," a new book out by "Nanny Diaries" authors Emma McLaughlin and Nicola Kraus. "The First Affair" chronicles a naive, red-haired White House intern who engages in sexual activity with the president during an election season, and then must endure the aftermath.

"The First Affair" is the second of three books sold as a package to McLaughlin and Kraus' publisher Atria about "women whom the public has made up their mind about," as McLaughlin described it. (Their previous novel dealt with a grown-up child star.) In "The First Affair," the authors imagine what life is like for women entangled in high-profile political sex scandals. "We live in a world where these scandals keep coming up, where men" — like Anthony Weiner — "can bounce back," Kraus said. Yet the women on the opposite end of these men's affections (or even more simply and depressingly: unwanted sexts) face bigger consequences; Kraus points to a July New York Times story about the women who exchanged messages with Weiner and who in turn were forced to move cities and miss weeks of work, and still endure the general public's taunts as they tried to go about everyday life. (Even fictional political sex can have a profound effect on a woman's life: Artist Justine Lai, who in 2009 painted a series of works that depicted her engaged in sex acts with presidents, came in for slut-shaming as a result of her art.)

Though fascinating, the ugly post-affair media shakedown isn't the un-put-down-able part of these stories. The real page-turners — the part that keeps people tuning in to "Scandal" every week — are the sex scenes. In "The First Affair," protagonist Jamie sits around waiting for the POTUS or his secretary to call and summon her to the Oval, where she knows she'll get a soda and hopefully a little hanky-panky. When she's not letting the president have his way with her, she's in her apartment, waiting for him to call and keep her up all night talking about nothing. An affair with a president is a fantasy about forbidden sex, but more important, it's about relinquishing power and control to another person in the most extreme way. These women are completely powerless to dictate the terms of their affair: If you're sleeping with the president, you must be available on his schedule, you must not upset him or he could easily banish you from his presence, and you must not tell a soul about it.

If women are fighting for the elusive "all," and getting it on their own terms, what's so hot about a sexual scenario that seems to promise the opposite? Julie Berebitsky, author of "Sex and the Office: A History of Gender, Power and Desire" and professor of history and women's studies at Swanee University, argues that it might have something to do with the power struggle women can't help but address so thoroughly these days (see: "Lean In" and Anne-Marie Slaughter's Atlantic cover story). "We're in a period where powerful women seem frustrated that it is difficult to have a successful career and a successful family," said Berebitsky. "This sort of reverting back to power through men, or the appeal of being close to power, might reflect many women's frustration that power on their own seems out of reach."

Having a choice between working or staying home with the kids might feel quaint to young women fresh out of college who are struggling to find full-time jobs at all. In "The First Affair," protagonist Jamie lands at the White House as an unpaid intern after she fails to find her dream job as a city planner in L.A. Largely uninterested in the opportunity, she becomes increasingly desperate for paying work. And as her involvement with the president escalates, she begins to view him as her best chance at landing a paying job (meanwhile, she also seems loath to seriously hunt for opportunities that would bring her affair to an end). A story like this, Berebitsky argues, takes us back to a "simpler time" (think "Mad Men"), when women derived power by being close to powerful men. As "Mad Men" shows, this time wasn't actually easier, but the great cultural expectation wasn't for women to "have it all."

"Scandal" presents a different view: that power can be attained by hard work, and steamy illicit affairs can exist alongside it. In the show, lead character Olivia Pope meets the president when she's working on his campaign. She rises to prominence at work thanks to her brilliant ideas, which stoke her candidate's desire for her. Once he's president, they continue their affair, though she routinely expresses agitation that he expects her to conform to his whims as she waffles between submitting to her attraction to him and trying to shut him out of her life. So here is another woman who, in a sense, can't have it all. If viewers want to wholly escape from that feeling of being stuck between two places, "Scandal" might not be the show for them -- but at least it's something they can relate to.

And then maybe the presidential affair is getting so much play now partly thanks to Barack Obama. McLaughlin and Kraus agreed his presidency made a great backdrop for "The First Affair," and probably also for "Scandal." "We have the perfect president in office from a creative point of view, because not only is he dreamy, but also you can't imagine him doing anything like this," Kraus said. True, their story might be less fun if the current president was putting the country through what "The First Affair's" President Greg Rutland puts his constituency through. But it's somehow also hard to imagine serious meditations on illicit presidential sex emerging during the tenure of the (arguably) less sexy President Bush.

Whatever the case, it'll certainly be interesting to see which way the pop cultural winds blow if we see former President Bill Clinton as first man.

Amy Odell is a writer and editor living in New York. She is currently working on her first book.