San Francisco to chain stores: Get out!

Neighborhoods are fighting back against Starbucks, Wal-Mart and the saming of America. Here's what recent wins mean 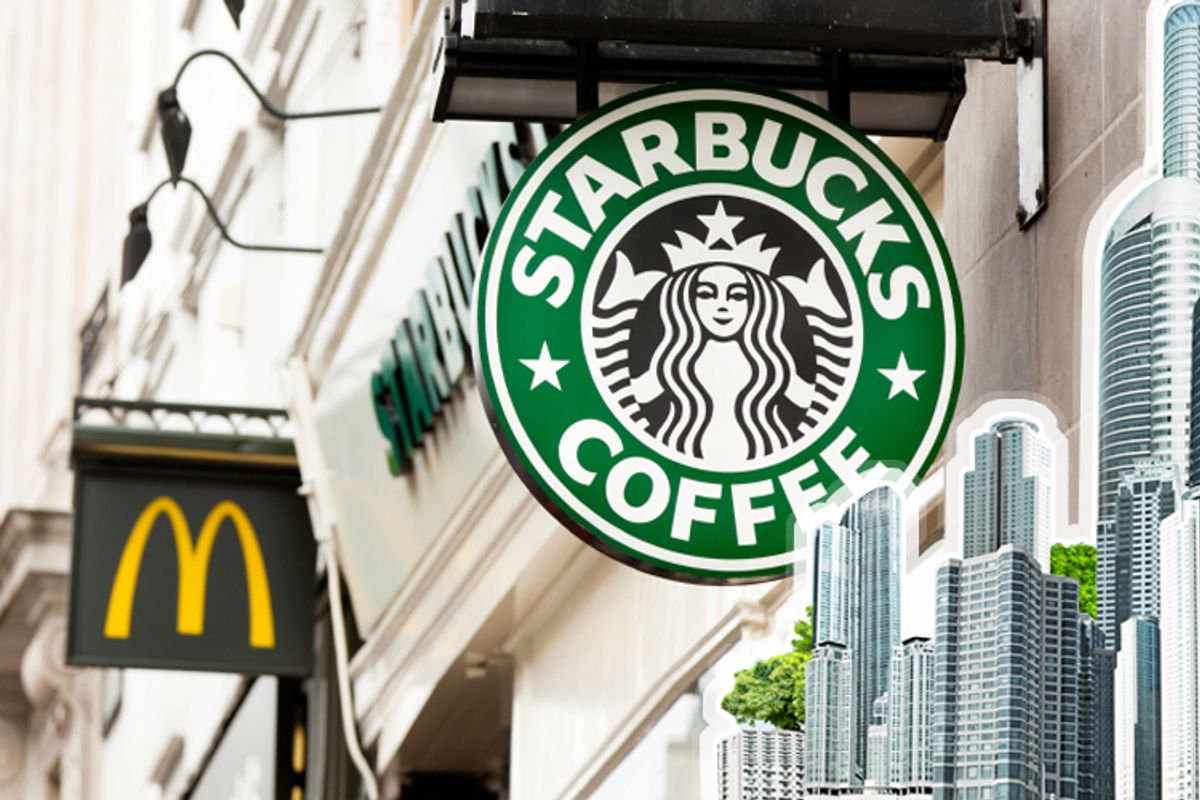 "Whether you're on the road or just cruising around town, your favorite McDonald's menu items are never far away." So boasts the McDonald's Restaurant Locator, and a glance at a distribution map of franchises in the United States proves the point. Population centers burn brightly with the Golden Arches; even the sparsely populated Western states are adequately supplied by the nation's 14,000-plus fleet of McDonald's.

That reach is astounding, but not exceptional. Four out of five Americans live within 20 miles of our 11,000 Starbucks; 30 percent of American grocery shopping occurs at our 4,500 Wal-Marts. The most familiar element of the American landscape -- excepting green highway signs and certain brands of automobiles -- might be Subway, which has over 25,000 U.S. locations.

You could be forgiven for thinking, as Simon and Garfunkel sang, "Each town looks the same to me." From Juneau to Jacksonville, we Americans share, as much as anything, a common commercial experience, a fractal pattern of retail at once comforting and mind-numbing. It stretches the powers of the imagination to think that eating and shopping options in the American city were once as distinct as fingerprints. The shift from mom-and-pops to chains has been one of the defining shifts in American cultural life, and counter-protests have been largely futile, with opponents pegged as sentimentalists standing in the way of progress and low prices.

That is changing. Dozens of American municipalities, mostly small towns with tourism in mind, have passed laws restricting the entry of chain stores. The biggest city to do so is San Francisco: in incremental steps punctuated by a ballot initiative in 2006, the California city famous for liberal activism has enacted the most influential anti-chain legislation in the United States.

You might not realize, walking the streets of Nob Hill, that you are experiencing an urban economy governed by the tightest big-city regulations on “formula retail” in the country. That's because the San Francisco's anti-chain net, while unique among large cities, is fairly permeable: three out of four chains that apply for permission to operate in one of the city's protected zones are approved. Sure, San Francisco is quirky and diverse, true to its reputation, and bursting with independent bookstores, cafes, restaurants and boutiques. But the city isn't an oasis: as in any other large U.S. city, there are dozens of Starbucks and Subway shops here too.

Supporters say the 75 percent approval rate does not do justice to the system's efficacy. Seeking authorization forces chains to make concessions to neighborhood interests, and the deterrent effect -- Qdoba might not even attempt to open across from a favorite local burrito joint -- is impossible to quantify. Two recent high-profile cases – the rejection of Starbucks and Chipotle earlier this year – have fueled the sense that neighborhoods wield real power. In the case of Starbucks, 453 signatures were submitted in support; 4,200 signatures in opposition.

The impact of the law has grown over time. When first adopted in 2004 by the San Francisco Board of Supervisors, the ordinance offered neighborhoods options ranging from "notifications" -- letters mailed to nearby residents upon a chain's arrival -- to an outright ban. In 2006, voters chose to implement a more widespread solution: "conditional use authorizations," in all of the city's 17 NCDs. Every Gap, CVS, and AMC that wants to move into one of the city's small-scale commercial streets must be approved by the Planning Commission. In total, hundreds of blocks require formula retail to obtain authorization, while dozens more operate under a categorical ban.

On the verge of the ordinance's tenth anniversary, with nearly a dozen pending modifications proposed by city supervisors, the San Francisco Planning Commission has undertaken an economic study to evaluate the effects of its formula retail controls. In discussing the goals and shortcomings of the law, the city has gotten right to the heart of America's love-hate relationship with the chain.

What separates San Francisco's political achievement from griping in Greenwich Village or Venice Beach is the employment of economic data to prop up the power of the plebiscite. That data comes largely from one firm, Civic Economics, which is responsible for more than half of the studies listed in the appendix of the San Francisco Planning Commission memo [PDF] that addresses formula retail controls.

Dan Houston, one of the founders of Civic Economics, stumbled into this niche in 2002 as he watched two independent Austin businesses, Waterloo Records and Book People, threatened by a city-subsidized Borders set to move in across the street. Houston’s young firm agreed to analyze the effects of then-powerful Borders sapping the market share of two local businesses.

The results were striking: for every $100 spent at a chain, approximately $13 remained in the local economy, largely through wages. For every $100 spent at the local outfit, $45 would recirculate locally, thanks to wages, corporate profits, locally oriented procurement, and potential future investment in the community, ranging from sponsorship of a Little League team to opening a second branch. The cost of a book or CD might be marginally higher, but the return for the city was nearly three times better at Waterloo Records and Book People. Borders didn't move in.

Since then, Civic Economics has performed parallel analyses for other cities, including San Francisco, and obtained similar results. "The numbers were undeniable," Houston said. "Nobody ever offers subsidies to the local bookstores -- it's crazy to think you're giving subsidies to these non-local restaurants."

The numbers may be sound, but the implication -- one type of commerce is better than another -- strikes detractors as unfairly proscriptive. I spoke with Bob Linscheid, the president and CEO of the San Francisco Chamber of Commerce, and Dee Dee Workman, the SFCC's Director of Public Policy. Both said the thought San Francisco's "authorization" process was fair and effective, but they are wary of the potential expansion of the ordinance.

The scope of San Francisco's control over chains like Radio Shack and Walgreens, for example, has grown each year. "When we start adding in all these uses, it just feels like a war on national retailers," Workman warned. "National retailers can come in and do a lot of good in a neighborhood."

"Not much focus is on the consumer, and giving the consumer the right to choose between companies that are located in proximity to each other," Linscheid added. "We need to remember that this is America, and that a certain amount of competition is good for the consumer."

Supporters of formula retail restrictions caution against invoking the "free market" argument. Stacy Mitchell, a senior researcher at the Institute for Local Self-Reliance who has written extensively about formula retail controls, pointed out that there are numerous hidden biases in favor of chains beyond the government subsidy. Suburban road design creates the perfect environment for big box stores; landlords prefer national chains for reasons -- credit, accountability, longer leases -- that have little to do with consumer preference.

It's a debate that other cities may soon be having, as chain stores continue their march from fading suburban malls into resurgent city centers. In New York, the city's trademark bodegas are dropping like flies and 7-Eleven is on the move. The City Council recently changed Upper West Side zoning to limit storefront size -- a tacit attempt to decrease the street frontage of banks and chain drugstores. Washington, D.C., has kept Wal-Mart at bay with a bill, passed in July, that requires very large retailers to pay wages 50 percent over the District’s minimum wage. San Diego enacted ordinances in 2007 and 2010 requiring community impact reviews for large retailers -- only to repeal them with Wal-Mart at the gates.

In San Francisco, meanwhile, the city will be examining its definition of formula retail. Should chains that got their start in the Bay Area, like Philz Coffee, be exempt? What about fixtures of neighborhood health like grocery stores and pharmacies? Why is 11 the magic number to define what constitutes “formula retail?”

Both cities and national retailers will be closely following what happens in San Francisco. It might just set a precedent.