The aporkalypse is coming

A Chinese company has made a bid for America's biggest pork producer, and its big problems could get way bigger 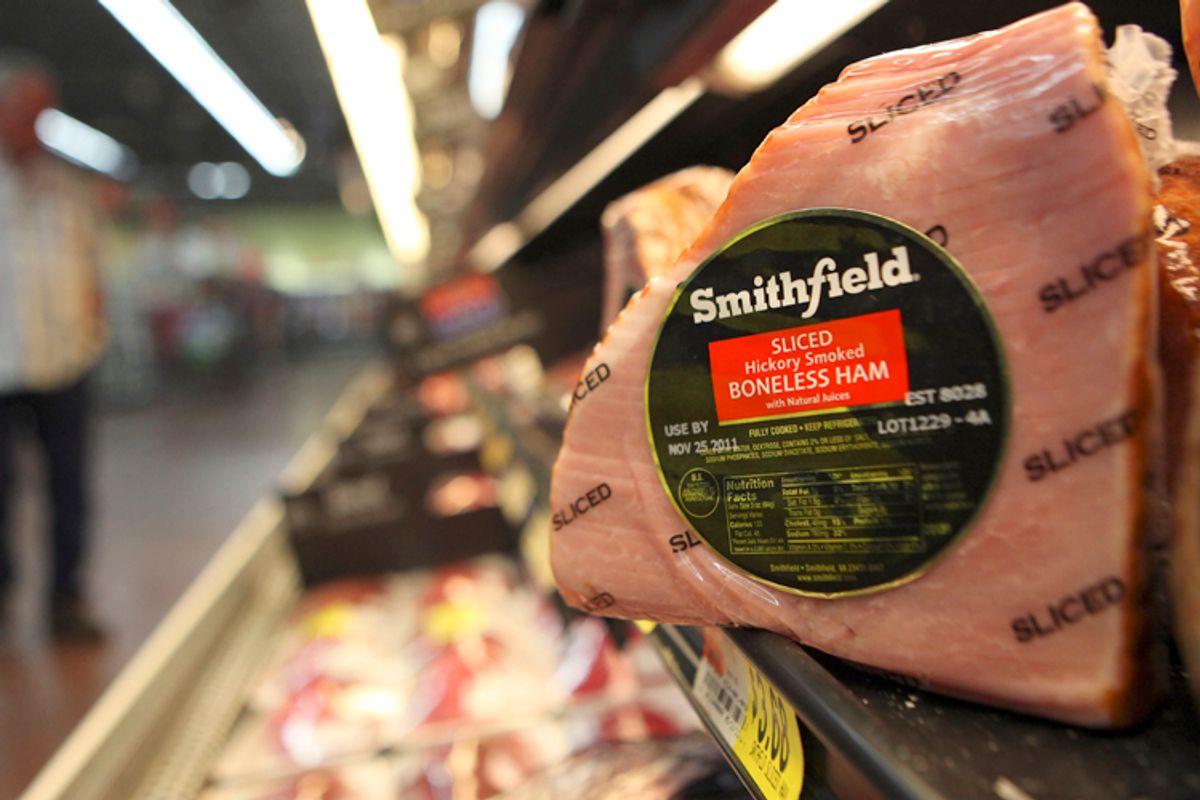 It is not a good time to be an American pig.  Raised without the benefit of sunlight or grass, you most likely spend your life on a slatted floor, packed into a building with thousands of other unlucky pigs just like yourself. No dirt to root around in. No corner to call your own. Just a miserable life with an even more miserable ending. And just as things were starting to look up – gestation crates on their way out! – the outlook got a lot grimmer.

On May 29, Chinese company Shuanghui International put in a $4.7 billion bid on Smithfield Foods, the largest pork producer and processor in the world.  Despite the chorus of voices in opposition – including members of Congress, food safety experts and future customers – most expect the deal to be approved.  But while some of the concerns raised are probably misplaced, selling Smithfield is bad news for the environment, the economy and, of course, the pigs themselves.

As if slaughtering and processing 27 million hogs a year, producing more poop at one location than the entire island of Manhattan, and keeping a staff that includes 17,000 non-union-represented employees wasn't enough, the most immediate and likely result of the merger is that those numbers will go up.

In other circumstances, a change in Smithfield’s ownership could have been greeted with jubilation: a company that has turned pigs – highly social and intelligent animals – into commodities, its standard practices reportedly include keeping pregnant sows in gestation crates, confined spaces so small they can’t even turn around.  (In 2007, Smithfield committed to phasing out gestation crates, but then backed away from that promise in 2009, blaming the company’s financial position. In 2011, it reasserted the pledge, saying it would stop using the crates by 2017.)  It has also admitted to feeding its hogs ractopamine, a substance already banned in the EU, China and Taiwan, to boost their growth. That the drug, which has been shown to cause heart and brain problems in the animals, may have negative impacts on human health is just a consequence of doing business.

Smithfield’s environmental record is no better, its McDonald’s-sponsored “sustainability award” notwithstanding. In 1997, a U.S. District Court judge found the company liable for more than 7,000 Clean Water Act violations since 1991, including dumping hog waste into Virginia’s Pagan River and “destroying documents to cover it up.” The judge fined the company a then-record $12.6 million. But Smithfield may not have changed in the 16-year interim. A 2009 Rolling Stone exposé accused the company of disposing of 26 million tons of “highly toxic pig shit” every year -- and of spraying the fecal waste onto surrounding fields, creating hundreds of acres of “shallow mud puddles of pig shit.” A 2005 Human Rights Watch report alleged that the company repeatedly failed to protect its employees from dangerous conditions and that it prevented them from unionizing. The company has also reportedly created its very own police force to keep those employees in line.

Enter the suitor, Shuanghui International.  A state-run corporation until just a few years ago, Shuanghui, like Smithfield, is no stranger to controversial business practices.  Most famously, in 2011, it was forced to recall thousands of tons of meat after an affiliate was caught feeding its pigs clenbuterol, a banned additive responsible for sickening at least 70 people.

Looking to capitalize on China's rising demand for pork, Shuanghui’s offer comes at a time when Americans are eating less of it than ever, which almost makes it look like a good idea.  But not everybody is on board with what would be the “biggest Chinese acquisition ever of an American company,” and theories about the deal’s true motives and implications abound.  Because of its size, the Committee on Foreign Investment in the United States will review the deal’s national security implications; but a bipartisan group of 15 senators is urging further scrutiny, particularly concerning the “food security, food safety, and biosecurity” impacts as well.  Wenonah Hauter of Food & Water Watch said the merger “tightens the grip of multinational agribusinesses and Wall Street on America’s kitchens,” noting that Shuanghui is partly owned by Goldman Sachs. She also echoed concerns that despite initially being the exporter, the U.S. could eventually become the importer in the deal, bringing in Chinese-raised pork products. And in a column in Fortune, Claremont McKenna College professor Minxin Pei accused Shuanghui of a “strategic calculation [that] is truly brilliant.” According to Pei, “It is really about owning access to America’s safe farmland and clean water supplies.”

There’s little indication that Smithfield will start selling its American customers Chinese pork, and Smithfield’s U.S. operations will still be subject to the same federal and state regulations that they are now, so theoretically, not much should change in terms of food safety, animal welfare, labor conditions, etc.  Considering what we know about Smithfield practices, that is hardly encouraging, but as Michele Simon, president of Eat Drink Politics and author of "Appetite for Profit: How the Food Industry Undermines Our Health and How to Fight Back," told me, considering the U.S. government’s history of lax oversight of this industry, concerns over a further degradation of American pig farming are legitimate. “The fact that Smithfield will be owned by a Chinese company in no way impacts the oversight of that company’s operation here, nor the laws the company is subject to here. However,” she adds, “there are some operational concerns.”  The question she asks is whether “Chinese ownership will potentially change how Smithfield does business here.”

Smithfield CEO Larry Pope answered that question in his testimony to the Senate Agricultural Committee saying, “It will be the same old Smithfield, only better.” And by “better” he means “bigger.” “There should be no noticeable impact in how we do business operationally in America…except we plan to do more of it.” When contacted for comment, Smithfield's office of Investor Relations and Corporate Communications echoed that sentiment to Salon, adding that "Shuanghui has pledged to maintain Smithfield's headquarters in Smithfield, Va., and to continue Smithfield's philanthropic support of community initiatives and investments in sustainability."

Conspiracy theories aside about the true risks of this merger, what Smithfield is essentially proposing, on its face, is, as Tom Philpott put it in Mother Jones, to turn the U.S. into “one big factory farm for China.”  So while our lowered pork demand could have meant, for example, fewer tons of toxic pig feces sprayed on fields across the country, or less use of dangerous steroids, or fewer pigs killed, or laborers rights’ violated, now there will be more.  The economic implications are also troubling.  Forbes predicts higher domestic pork prices and “reduced competition in the domestic packaged meat market.”  Add to all of that the carbon footprint of massive global pork shipments, creating a distribution chain that leaves plenty of room for mishap, whether accidental or otherwise.

In its June statement dropping its contract with Paula Deen, Smithfield said it was “determined to be an ethical food industry leader.”  Shareholders should keep that in mind when the takeover is put to a vote at the end of next month.