The show introduced viewers to the euphoria and destruction of meth. Nobody needed to tell me 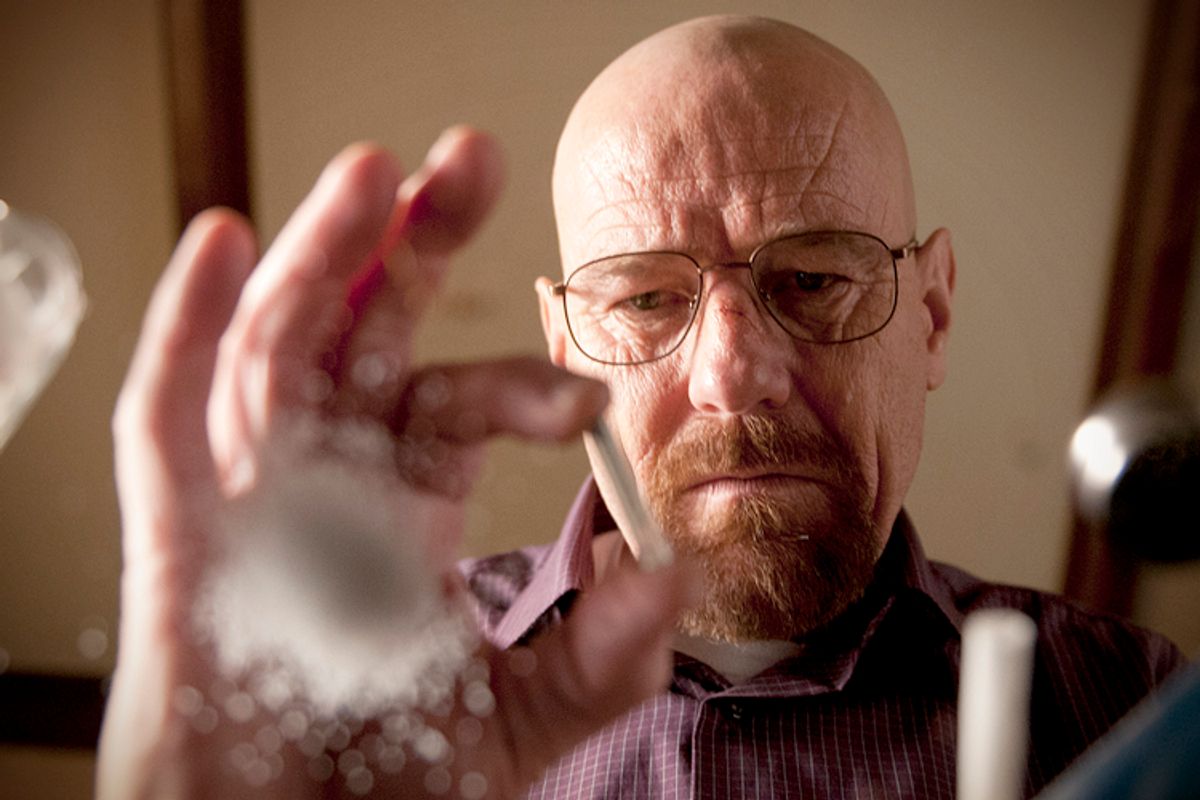 When “Breaking Bad” debuted in 2008, I was 27 years removed from a methamphetamine addiction. But if I thought about the drug, I could still smell it exactly: Medicinal and metallic and crude and burning.

I know fans will be sad when the show ends its sixth and final season later this year, but not me. For me, the show can't end soon enough.

My meth addiction begins back when meth was cool. Like most tales of addiction, mine is a glorious delusion of grandeur. I'd arrived in Dallas in the mid-1980s and had the good fortune of meeting Mark, whose partner Don worked the door and dealt the meth at the Starck Club, the city's answer to New York's Limelight. (Their names, like all names here, have been changed.)

Simply calling my early meth use “euphoric” does not do it justice. Imagine standing naked and looking up into a downpour as you involuntarily lose your bowels. Sensations are all around you: visual, mental, physical. Time stood still in that cavernous cement basement. I was wittier, better looking, charming, all-knowing, even taller. We ruled the night, sniffed through the day and lived off $20 bags. Drank lots of milk, chain-smoked and stored our meth in rice to keep it fresh as I skimmed money from the far-away parent company of my low-level writing job. Even after fainting in the shower, I fancied myself a latter-day Aldous Huxley, searching for my proper circle of avant-garde intellects.

After a while, of course, time stood still too long and you'd eventually turn inward. But I knew the secret! And clung to the belief. Everybody had it wrong, as I was the superior being. It's not that stupid refrain that people keep doing drugs to relive their first great high. No, that's not it at all. The secret is if you can manage the drug, you can stay on it forever.

But meth will turn you into an animal sooner or later -- and that's an insult to animals.

Along the way my friend Billy died of AIDS, we were all high at his memorial, and his partner Bill took to shooting it in his neck while I pursued a series of fractured “relationships” with girls and drove Bill to the People With AIDS free pantry so I could steal food. I was still months away from my low point.

But why? Why is meth so debasing and strong? The UN World Drug Report called it the most addictive drug on Earth; the National Association of Counties called it their No. 1 crime problem and a DEA agent called it “crack times ten.”

As Bryan Cranston's Walter White would tell us, it turns out that methamphetamine shares a similar chemical structure to dopamine -- the brain's main neurotransmitter, which releases feelings of pleasure and reward. They are perfect for each other as binding and bonding agents. The brain and the drug fall in love, but too much meth and the brain stops producing its own dopamine, and the only way to find motivation to get out of bed is more meth.

According to the National Institute on Drug Abuse (NIDA), it takes 12 hours for 50 percent of the “pure” meth you take to be metabolized out of the body, versus just one hour for cocaine. And that’s why we called coke “bubble gum” for its inability to bring the slightest high. Waste of time and money, for that $20 worth of meth would keep you up all weekend. But that also helps explain why getting off the drug can be so nasty. It stays in your system.

“If you are deprived of food for five days and you see a corpse of a rotting animal you will eat it,” says NIDA director Dr. Nora Volkow. (I would have.) “Not out of pleasure but an intense motivational drive by the brain. You will be unable to control it, and that's what happens to someone addicted. The dopamine increase is the heart of all addiction, and meth's pharmacological potency is its effect on dopamine. You get massive increases in dopamine that natural reactions cannot compete with and normal pleasures are not pleasurable. Just getting the drug is.”

NIDA research into neurology notes that dopamine released via drug abuse is stored in the brain's amygdala, the part of the brain that houses memories. That's why I can still smell it. And why I still desire it, despite what it did to me. Or I did to me. We did together.

Back when I was using, meth was far away from mainstream culture, aside from a throwaway line in “Taxi Driver” and some Lou Reed liner notes. But eventually Hollywood took a shot with the release of two films in 2002. “Spun” was stylistically over the top but had flashes of reality and a base understanding of the drug’s appeal. Val Kilmer got it somewhat right in the more poignant “The Salton Sea.” But both films reinforced a dismissive attitude toward meth, and the crazy losers who used it, and did little to raise consciousness or interest at the box office.

It took the homemade meth movement of the mid-2000s to get the national media to pay attention. “Meth mouth” entered the language, and cold and sinus medicines were taken off shelves, since ephedrine and pseudoephedrine are primary ingredients in cooking meth in backyard labs, and teen girls entered treatment due to the “Jenny Crank diet.” By “Breaking Bad”’s debut in 2008, the drug's use had more or less peaked, with the numbers stabilized at a suspected 11 million experimenting or hooked.

Since 2008, the homegrown meth movement has mostly been replaced with bulk distribution out of Mexico, where in early 2012, for example, 15 tons lying in wait were discovered. So abundant and accessible is the drug and so powerful its hold, the greatest hope in combatting it has become medicinal blockers or vaccines. Two firms in 2012 announced initial research trials of antibodies to intercept the drug at a molecular level before it hits the brain, one funded in part by Volkow's NIDA.

The end of meth came for me slowly, then abruptly, with the awful realization that the drug was managing me. Turning ever-inward the superior being became selfish, judgmental, obsessive, fearful, broke and increasingly isolated. But still on the make.

One day, trying and failing to blend in on the tony campus of Southern Methodist University, I became overwhelmed with rage at what I had become, that feeling of lowness amplified by the normalcy and success I saw all around me and which I’d once thought was mine. I fled to my car. Hands adjusting the wheel and foot gunning down on pedal, I thought: I’m going to do it. I came very, very close to plowing my car into a group of students. Hard to think about now.

A few nights later, I consolidated all the meth I had, abandoned my studio apartment with its furniture made out of newspaper stacks, silently placed everything else in the Dumpster and fled under the cover of the night I had once relished. I was thankful I had a place to escape to. So many don't. I have no idea what ever happened to Mark and Don and Bess and Suzanne and Robin and Bill and others I can picture but not name.

Still, the “Breaking Bad” years have been galling and haunting. I know there are dealers and users who see it as validation and a source of creativity and yes, a way of life. I probably would have.

Maybe the show does raise awareness of the horrors and acts as a deterrent. I honestly couldn't say. I've never watched a single episode. I even turn away from the promos. The real secret? It's all too tempting. Terrifying.