We kill and we forget

An infamous power plant operates near the site where Native Americans were massacred. We must stop burying our past 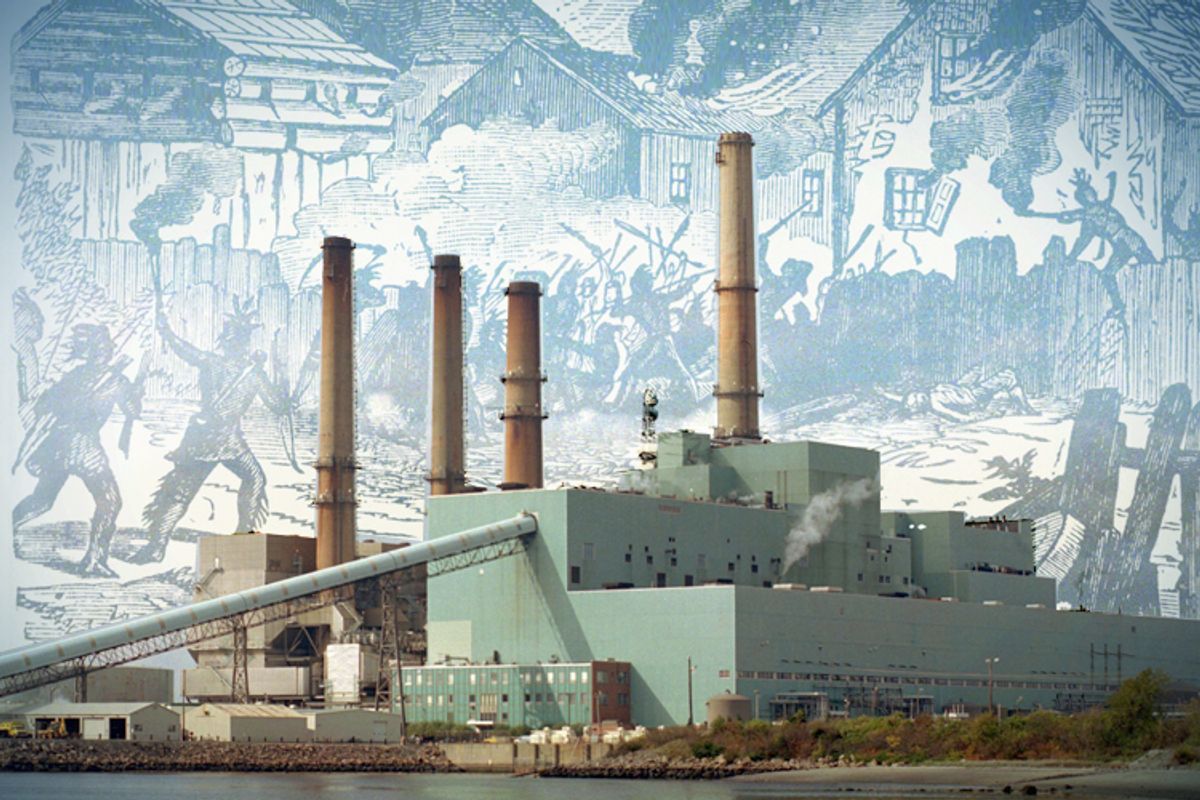 Three months ago, a Quaker man in a wooden lobster boat blocked a tanker carrying coal to Brayton Point Power Station in Somerset, Mass., the largest source of coal emissions in the Northeast. In April, Dominion Resources, which owns the plant, had been fined $3.4 million for violations of the Clean Air Act, and has needed to invest $1 billion in the past years to reduce the plant’s impact on air and water. Environmental groups allege that the plant expels 15,000 pounds of mercury, arsenic and lead yearly, which might cause nerve and brain damage and cancer. Coal Free Massachusetts recently released a report stating that health-care costs – asthma and respiratory illnesses – caused by pollution from the plant were as high as $294.5 million in 2012 and $6.3 billion over the past decade.  The plant’s 500-foot cooling towers were built – in 2011 – because the plant had been dumping hot water into the Taunton River, possibly killing winter flounder populations, since the plant’s opening in 1963. Galvanized by the Quaker lobsterman, 44 protesters dressed in berry-red shirts picturing wind turbines were arrested a few weeks ago for trespassing on the power plant’s property. The protesters want Gov. Deval Patrick to close the plant immediately.

Brayton Point is also about a thousand feet from Gardiner’s Neck, where, 337 years ago, on August 6, 1676, days before the end of King Philip’s War, Weetamoo, the female leader of the Pocasset Wampanoags, washed ashore, naked and drowned. She had escaped an English militia attack by pushing into the Taunton River on a collapsing raft. The English who found her cut her head off and sent it to Taunton, where it was put on a stake in the middle of Taunton Green, now the intersection of Routes 140, 44 and 138. She had been trying to reach the eastern bank of the Taunton River and get to her home, now Tiverton, R.I.

For 14 months her brother-in-law, Wampanoag chief King Philip (Metacomet), had led the first large-scale American Indian resistance against colonial expansion. By the end of the war, by disease, starvation, enslavement and casualties, 80 percent of the southern New England American Indian population was gone. Days before Weetamoo drowned, the English captured then sold King Philip’s wife and Weetamoo’s nine-year-old nephew as slaves to the West Indies. Days after Weetamoo drowned, Philip was shot in a swamp. His head was cut off and stuck on one of the palisades of Plymouth’s fort, where it stayed for 20 years. Philip’s father, Massasoit, had taken part in the first Thanksgiving in Plymouth years before, had helped Pilgrims through the winter as they sought their utopia. Philip’s hands were cut off, too; one of them was preserved in a bottle of rum and exhibited around New England. Weetamoo’s husband (her fifth) was executed in Newport.

Increase Mather wrote that the Pocassets imprisoned near the Taunton Green “made a most horrid and diabolical lamentation” when they saw Weetamoo’s head on the stake. There’s no memorial for Weetamoo there. Instead, the Green is now famous for the "Lights On" Christmas festival: “Each year,” according to the Taunton Gazette, “someone from the community is given the honor of flipping the switch and transforming the ordinary Taunton Green into a winter wonderland of colorful, sparkling lights.” Taunton’s mayor said in 2008, “At this time of the year, we hold our heads up a little higher and stick our chests out because we are proud to be known as the ‘Christmas City.’”

How the past is buried. Or maybe it’s mixed over itself, a slop of abuses. There are a few King Philip’s War commemorative boulders scattered through southern New England’s woods with inscriptions like, “In the miry swamp, 100 feet from the spring, according to tradition, King Philip fell, August 12, 1676. This stone placed by the RI Historical Society, December 1877.” But for most history classes, it’s Pilgrims, New England American Indian wipeout by disease, American Revolution. The point of land where Weetamoo washed ashore is now dotted with houses on two-acre lots.

I’m not sure what we should remember of Weetamoo, or of King Philip’s War, but tragedies reflected from the past often illuminate those of the present. Climate change, land development, urban expansion and irreversible environmental devastation might be somehow linked, in its geography, to what we’ve lost or abused in the past.

Perhaps we should remember that though Weetamoo directed hundreds of Pocasset warriors, she never wanted to go to war. When Colonel Benjamin Church, English military leader in King Philip’s War, visited Weetamoo’s fourth husband, Petononowit, just before war broke out, he found Weetamoo alone on a hill. She told him that all her warriors had left, against her will, to attend the "dances" with Philip at Mt. Hope, and that she "feared" there would be war. Church told her to go to Aquidneck Island, and she did, but was turned away. When other neutral Wampanoags gathered on shore to show their commitment to peace, a man named Anderson the Dutchman with twelve others killed thirteen of them, captured eight, scared the rest into the woods and burned all 40 of their canoes.

Of Weetamoo's death, Increase Mather wrote, “Now here it is to be observed that God by Himself in His own hand brought this enemy to destruction. For in that place, where the last year, she furnished Philip with canoes for his men, she herself could not meet with a canoe, but venturing over the river upon a raft, that brake unto her, so that she was drowned.”

Better to remember her like this: Puritan Mary Rowlandson, captive of the Pocasett tribe for three months in 1676, wrote that Weetamoo was “a severe and proud dame… bestowing every day in dressing herself near as much time as any of the gentry of the land; powdering her hair and painting her face, going with her necklaces, with jewels in her ears, and bracelets in her hands.” She had a coat “covered with girdles of wampum [the bright purple, half-moon edges of clam shells] from the loins upwards…from her elbows to her hands were covered with bracelets; there were handfuls of necklaces about her neck and several sorts of jewels in her ears. She had fine red stockings and white shoes, her hair powdered and face painted red.”

Because she was on the run from the English when she jumped on the "raft" – a few pieces of wood – to float home, she probably wasn’t dressed as Rowlandson records. But maybe she had a few bracelets still on, earrings hooked in, some loops of necklaces. Maybe there were traces of her red face paint, smudged by sweat or dried and flecked on her forehead. As the raft broke apart, as the current took her, maybe the river undressed her. Pushed off her shoes.  Washed her face. Broke apart her jewelry. I imagine a few purple scales of wampum spinning down the Taunton River, maybe still in the Taunton River, buried deep under silt and mud for the past three-hundred and thirty-seven years.

Weetamoo is memorialized in Weetamoo Woods, 650 acres of preserved upland forest just northeast of Tiverton Four Corners, the more inland section of the historic Pocasset territory. After hearing the news about the Brayton Point protests, I drove the few miles from my house to the preserve.

A party of blue butterflies moped over the grass path leading into the woods. Song sparrows filled the hedges. Mosquitoes and flies and bugs I couldn’t see but distinguished by their bites circled my head, touched my ears, eyes, the corners of my mouth. The stone walls, built when the woods were fields and fenced in now by new-growth trees, were enveloped in age-spots of moss and lichen, and looked to be deflating to the ground rather than tumbling down. The canopy of this long-protected forest – beeches, hollies, oaks and maples – was so thick that it bottled the sunshine; everything reflected green. Green rocks, green dirt, green tree trunks, green puddles in the middle of the green path. A long untended forest, where the undergrowth and rot is so thick and full of color, is disorienting, as if the undergrowth were a second, upside-down and darker canopy at my feet. Cinnamon-colored mushrooms sprouted from the sides of the path.

I walked to High Rock, a bald and long granite hill rising above the trees in the middle of the Woods. The bugs circling my head were pushed away by the wind blowing over the canopy. Making my way around the stunted cedars on the top of High Rock, I came to a fire pit beside a wild blueberry bush. Some of the logs were burnt and some fresh and green, like somebody had tried twice to start a fire. Aside from the items usually shed from a teenage campout in the woods – cigarette butts and cellophane wrappers, plastic bottles – there were papers, held down by the pig-pile of unburnt logs. The papers were scorched, but still legible. It was a tourist brochure. “The most popular trail is El Camino Inca,” it read, “leading from Cuzco to the city of Machu Picchu.” Cuzco was the capital of the Inca empire until the Spanish conquest in 1533. That I found a brochure detailing the route to a conquered South American Indian capital in the middle of the woods whose name memorialized the first decimated American Indian tribe felt, at least, fateful in the way severe coincidences do.

After descending High Rock, I then drove to Gardiner’s Neck, a half hour away by car. I crossed Braga Bridge and exited by Brayton Point Power Plant’s cooling towers, which were exhausting limp and tattered plumes, not the full nimbus heads that seem to come in the morning. I drove down Gardiner's Neck Road, all the way to the end of the point, where Weetamoo would have most likely washed ashore. The road ended at three driveways splitting off to the point, each posted with “Dead End. Private Property: No Trespassing” signs.

I parked on the public road and walked down the center private drive to a house on the southeast side of the point. The door was salmon pink. After I hit the buzzer twice, a gray-haired man with a kind face came into the driveway from around the side of the house.

I told him I was researching Native Americans in the area.

“We have visitors,” he said, turning away. “I don’t have time for this right now.”

“Can I ask you one question? Have you heard of Weetamoo?”

“She probably died around here,” I said. “Maybe right here on this property – I’m wondering if there’s any marker?”

“No,” he said, and waved goodbye as he walked back to the house.

I then saw the license plate of his car. “You’re from Florida?” I called.

“We have a house there, yes,” he said, and shut the door behind him.

It was vanity plate, with the word “UTOPIA” split by a pair of flowering orange blossoms.

Beyond the house, there was the coal plant, showering poisonous emissions onto Taunton River.

Ben Shattuck has written for McSweeney’s, The Rumpus, HTMLGiant, ReadyMade, Once Magazine, 7x7, and The Morning News, among other publications.