Idyllic small town to McDonald's: Get out of here!

An Australian suburb's virulent fight against a proposed McDonald's turns rough, but rallies residents together 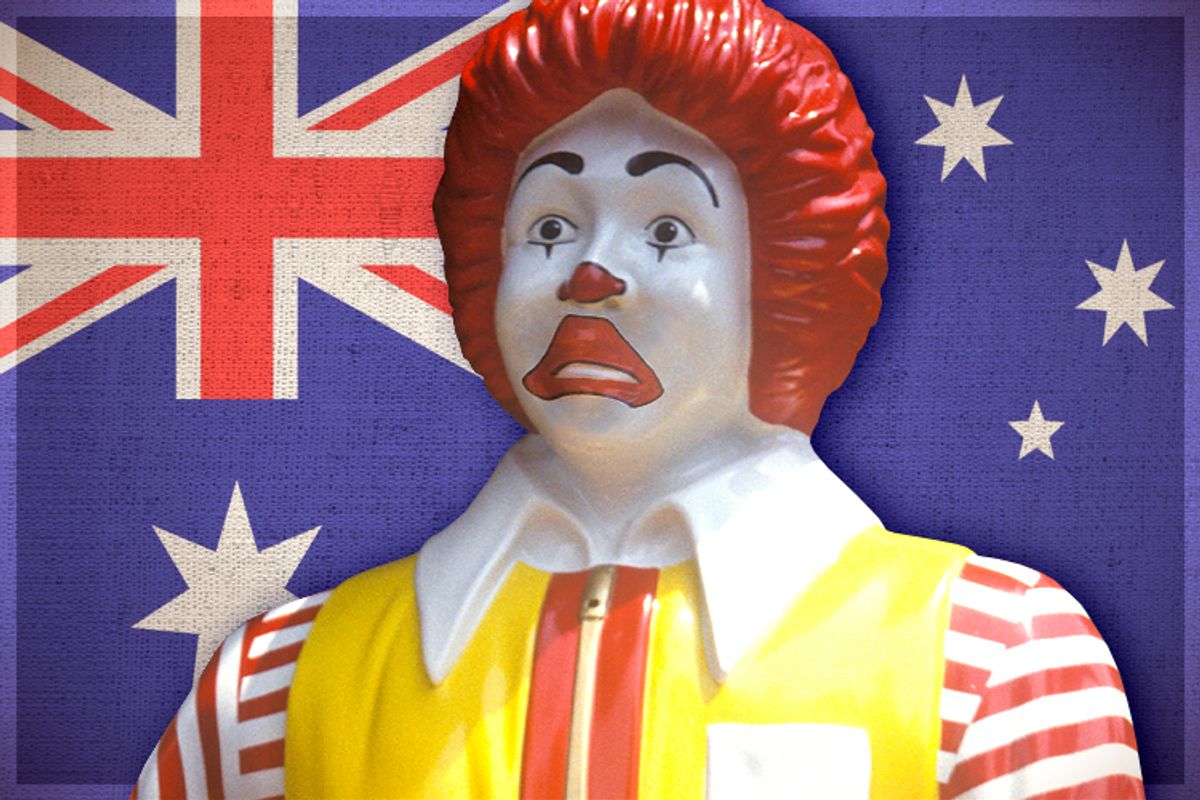 (spirit of america via Shutterstock/Salon)
--

A lone protester, sleeping rough on top of a building marked for demolition in the tiny outer-Melbourne suburb of Tecoma. Singing, dancing and occasionally joined by other activists, the 24-year-old student stood between an eager wrecking crew and a 24-hour drive-through McDonald's. For seven freezing nights, she braved the wild winter cold and unpredictable Victoria weather, often sleeping alone on the controversial site of a proposed McDonald's.

At 4 a.m. one day, earlier this month, her protest came to an end. According to local reports, 50 “militant” looking police, "ringed the site" and, stretched out on the arm of a cherry picker, bundled her off the top of the building and formally charged her with criminal trespass. The grave faces and dark uniforms of the officers clashed incongruously with the spectrum of colors and emotions on display by other protesters who remain at the site. As one exasperated local asked that morning, “If communities protest development, is this what we can expect now?"

The cause this young activist so passionately believed in is one advocated by nearly everyone in her community: stopping the relentless march of McDonald's into an area that has clearly said "No." It might be as strident and angry an opposition to McDonald's -- or any encroaching chain -- as is going on anywhere.

Why are the locals so upset? Only 21 miles from the four million residents of Melbourne proper, Tecoma -- a small suburb of about 2,000 -- is nestled within the Dandenong Ranges. They comprise a series of small mountains covered in dense bushland, low-lying valleys and temperate rainforest. Much of this area has been protected by Australia’s national parks body since 1882, and its idyllic surroundings and proximity to Melbourne have consistently attracted a more alternative, bohemian crowd. And this crowd evidently does not want the Golden Arches in its backyard.

From the outset, local resistance to McDonald's' advances in Tecoma has been staunch. Many view living in the greater Dandenongs area as a “privilege;” its serene rainforests and native wildlife feel a world away from the ever-expanding concrete and chaos of nearby Melbourne. Garry Muratore, community spokesperson for the campaign, told the Guardian (Australia) that “on sunny days, I like to remind myself how good I have it, watching Kookaburras in my garden surrounded by nothing but trees. It’s not a suburb; it’s very much a way of life.”

The site itself has become a beacon for residents who opposed the development to congregate around. Locals arrive after work or when they can, and donate money to support the fight against one of the world’s biggest fast food retailers. Those involved come in all types, “soldiers, doctors, teachers, builders, salesmen, nurses, the young and the old” -- their objections summed up by one protester in “a single message -- this is the wrong place for a McDonald's." Most swing by the site for a chat with their neighbors or to write messages of support on the cold, black boards erected around the property. A committed minority, however – like the rooftop camper – have spent weeks at the site drumming up support for the campaign and passing around tea, coffee and cakes.

Since June, locals have made sure their feelings are heard on the issue, protesting day and night, chanting slogans and using social media to dissuade the fast food giant from building here. According to the anti-Tecoma-McDonald's web site Burgeroff.org, a “record number of 1,170 written objections were directed at the local Council” about the proposed McDonald's, residents citing “concerns relating to traffic, litter, noise, crime, impact on existing local businesses, locality opposite a Primary and Preschool, proximity within 1 kilometre of a National Park” and the fact that not a single 24-hour fast food chain with a drive-through exists in the sleepy hills of the Dandenongs.

The local council soon recognized the depths of the community sentiment in Tecoma and unanimously passed a motion denying McDonald's permission to operate in the area. Democracy seemed to function as it should, the locally elected officials accurately representing the wishes of their small but vocal constituency. That is, until McDonald's appealed the decision to a state-based body, the Victorian Civil and Administrative Tribunal (VCAT), which saw no issue with allowing McDonalds' to build a new drive-through store right in the middle of Tecoma. As one of the protesters described it, “a community’s heart was broken.”

McDonald's sees it differently. Its Australia spokeswoman, Skye Oxenham, told The Herald Sun that the company has followed "due process every step of the way. ... We have a great franchisee from the area who is about to create 100 local jobs, provide accredited training and work experience. ... We're ready to get on with it and know there is much support from within the community."

If so, it's hard to find. With every defeat, more residents  seem to have become activists, protesting in front of the proposed site, threatening to chain themselves to supply trucks and camping atop the existing building slated for demolition. Assistance and resistance has come from the usual sources: union workers refusing to take down the site due to “health and safety issues,” while security officers hired by McDonald's have verbally threatened and allegedly assaulted protesters.

The “No McDonald's in The Dandenong Ranges” movement has been gaining momentum across Australia with their online petition, now exceeding 75,000 signatures, and their Facebook page, garnering nearly 15,000 likes.

Just last week community organizers traveled to Sydney to present their petition to the head of McDonald's Australia personally. Their nearly 750-mile round trip proved fruitless, however, when the group’s leaders were met by unmoved security staff who assured them that the signatures would be handed over to the "appropriate" corporate officials. Now protesters have raised $30,000 to come to America and present a petition against the store to McDonald's executives at corporate headquarters in Chicago.

For the residents of Tecoma, the questions may be worth asking: If this is democracy, where’s my vote? Where’s my voice? Questions with no satisfying answer. Meanwhile, a community feels so strongly about an issue that its residents are willing to risk a criminal record to stop McDonald's from operating in their township. Instead of engaging with these concerns, a cordon of police and a cherry picker have removed the dissenting voices, leaving only corporate heads to carry on the conversation.

Economic commentators often like to talk about the natural relationship between business and democracy, a mutual back and forth between the two interconnected parties. But if what has happened in Tecoma is the natural outcome, then even they would have to admit that at times, this relationship can be an abusive one.

Carlo Dellora is an honors student at the University of Melbourne. He is currently working on a thesis evaluating the role of contrarianism in politics and journalism with a specific emphasis on the work of Christopher Hitchens.