The author of the much-praised "Necessary Errors" on finding a mainstream audience, and gay life in the 90s and now 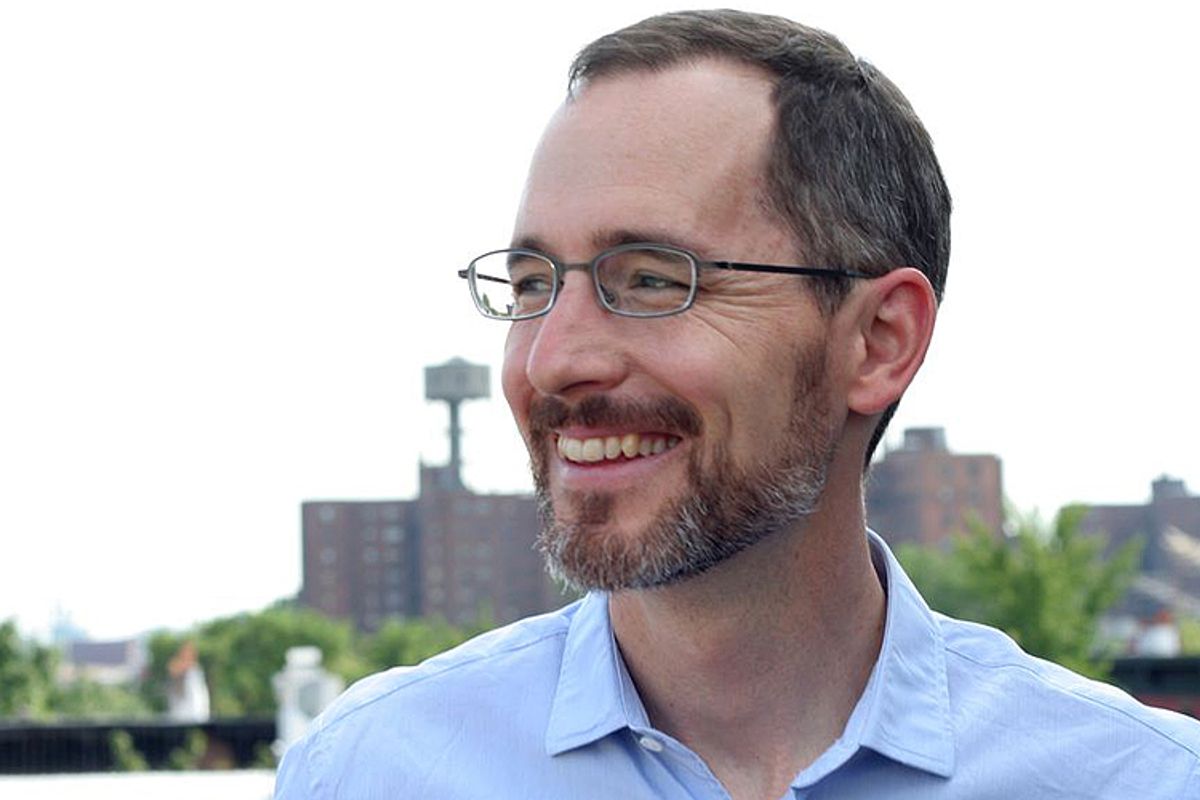 Earlier this summer, Salon asked where the buzzed-about gay novel was -- the major literary novel taken seriously by critics and audiences that managed to convey in frank tones what it was like for gay people just as so many major literary novels do for straight people.

While Caleb Crain's "Necessary Errors" may not quite be that book -- it's too particular about time and place to be extrapolated seamlessly to life in America 2013 -- it's a step in the right direction. The book, about which James Wood recently raved in The New Yorker ("'Necessary Errors' is a very good novel, an enviably good one, and to read it is to relive all the anxieties and illusions and grand projects of one’s own youth," the critic wrote), tells the story of Jacob, a callow youth who, having just graduated college in 1990, heads to Prague to escape anything and everything that can't be set aside for a drink at the local gay bar or an impromptu trip to another city.

Jacob meets men, sleeps with men, hangs around with friends, drinks, travels -- the whole thing is episodic in exactly the manner one's early 20s are. And yet the novel is notably gay in its sensibility as well as its subject matter -- it's hard to imagine a novel about a man cycling through women bearing as little explicit moral judgment as does "Necessary Errors." We spoke to Caleb Crain about the degree to which his book is marketable to an audience publishers fear might not pick up a gay-themed book, about the creation of a protagonist, and about the debate over whether characters must be likable.

Did you feel any pressure to tell a story that represented a sort of universal gay experience, given the relative paucity of gay-themed novels? To what degree is Jacob particular and to what degree does he stand in for the experiences of gay men more generally?

I guess the answer would be no! I think every work of art is its own thing. I don’t really think that it makes sense for a work of art to take on a social purpose. Just because there are so many constraints that you’re working under already -- what material is available to you, what your capabilities are with the abilities you have, what will the market bear, what’s the nature of your audience -- these are the constraints you have to satisfy. If you have a purpose of social reform, I don’t think it’d be art. Maybe it could if you were a super-genius. But it’s already so overdetermined that the only thing you can have in mind is to make the best novel you can.

Speaking of what the market will bear, it's less common for gay novels to get a big push from publishers. Was this something you had in mind as you wrote?

I’ve always been aware that for me to write fiction was going to be more difficult than for someone demographically similar to me -- but straight. A novelist has to draw on his own experience. My experience is a gay one. It’s not all of the material I can draw on but it is a pretty rich source. There are so many constraints already -- to have to give up that material would be crippling. I’ve obviously been aware that gay fiction has a difficult recent history shall we say, a difficult and recent history. When I was sitting in the room writing, I don't feel I had as much choice in the matter. I had to write the book I was going to write.

It wasn’t until very recently that I realized, Oh! publishing’s focus is often on who can we sell this book to and who will identify and want to pick it up. It was only recently I realized the odds against me were a little high. The book -- I’ve deliberately not asked for any numbers, but apparently it’s doing okay! And the reception in terms of reviews has been great. I couldn't be more grateful or feel more lucky.

It could be the culture has turned a corner. It may have turned a corner: gay subjects were acceptable in TV shows five to 10 years ago, but publishing took a bit longer. People who are younger than me -- literate people reading novels -- don't have a univocal sense that "gay people are weird and I wouldn't want to read about them." I don't think they care that much or are threatened by it as Other. I think they're comfortable with it. Whether it’s a good novel or not could be what decides their reading it, rather than, "Does this fall in a circle of what I’m comfortable with?" And it’s not just a gay novel; there are straight characters in it.

Tell me a little about what it’s like writing a novel as an academic, about toggling between those two sides of the mind. Is it difficult?

I guess so! I’m not a professor, so I don’t have the publish-or-perish thing. Most of the scholarly stuff was done a long time ago; there’s no urgency to it. It is hard to juggle fiction and nonfiction. Usually I spend the mornings on fiction and afternoons on nonfiction.

How do you make the transition?

I have lunch, walk the dog, look at Twitter, which I shouldn’t do.

Is getting a Ph.D -- as you did -- a good move for young writers today? Would you recommend it?

I don’t know! I think everybody has to make their own decision based on their own preferences and aptitudes. I wouldn’t recommend it generally. I wouldn’t issue a general recommendation one way or another. I think it’s a good place to go to have permission to spend a few years reading books and writing about them and thinking about them. But a Ph.D program is pre-professional training for being a professor. Which is not the same as a writer. I’m sure they have lots of responsibilities. Administrative work and writing letters of recommendation.

The degree to which writing about gay life in Eastern Europe -- as the AIDS crisis rages through the world, yes, but in particular through the protagonist's and your homeland -- means that you're necessarily coming at American gay history from a tangent angle. The AIDS crisis kind of haunts the book.

Haunting is the right word. It’s there but it’s offstage. I don't know what else to say about it. It was part of that historical moment… There are a lot of things Jacob is stepping aside from by going to Prague, to see if he can put off having to deal with them.

In America at that time it was really different than it is now. It was kind of everywhere -- the negotiation with the closet was more intense 25 years ago in any part of the world. Jacob has these utopian ideas Europe will be this refuge of understanding and tolerance and that turns out not quite to be the case. Not quite in the way he imagined.

Is there a gay canon? Or, at least, a set of books you particularly admire with gay subject matter?

"My Father and Myself" -- all of [J. R.] Ackerley is great. I love the fiction of Denton Welch. I think more recently, Alan Hollinghurst is a model.

But is there -- or does there need to be -- a canon, especially in light of the fact that younger gay people don't necessarily have a robust older generation with whom to engage, given the premature deaths of so many from AIDS?

I think everybody ends up assembling their own canon as they read. The whole idea of it is that it’s not -- it’s a legacy, and it’s one you kind of pick and choose. You don’t just reproduce your parents’ furniture, you buy your own along the way. When I was in my 20s there was the idea that literature might be a way for gay people to discover their history. It was very big in lesbian and gay studies. There was always a tension in it. Do we want a separate history and literature? The straight canon is very gay. The question Eve Kosofsky Sedgwick once asked is “What if Proust were gay? What if Melville were gay? What if Shakespeare were gay? What if Whitman were gay?” We don't have to ask that question. I don't read somebody because they're a gay writer. I read them because they’re a good writer. Straight or gay, I’d recommend Ackerley, Welch, Sylvia Townsend Warner, to anyone.

Tell me a little bit about how you feel about the debate over "likable characters," one that seems to have dominated the conversation around women writers in particular this year but hasn't been deployed at male writers as commonly?

You’re supposed to have a bit of distance from him! I think I just sort of enjoy that, enjoy the ambiguity of letting the reader not be sure whether the narrator agreed with Jacob or was cheerleading for him or not. I liked that as an aesthetic element. You as the reader are always wondering about that relationship between the narrator and main character because it gives you as reader freedom to see him in different ways. You go through identifications and misidentifications. Anna Freud wrote about “the as-if personality” -- one in which you discard personalities. It’s a part of growing up. You decide in March you're going to be a hippie and in April you’re a future investment banker. Jacob’s a little older than that, but not by much.

Right, and he also missed the period during which young people usually start dating.

This is a psychosocial development of a young gay person -- it was delayed, it had to be. Maybe it’s changed since then, I hope it has. But there’s not the same coherence of personality later in life.

Do you think it's still that way for young people?

I’m not attuned to the experience of young gay people today -- I’d be afraid to generalize. I imagine that even though things are much better today, some amount of negotiation and dance of the seven veils still has to happen. I’m an out gay 46-year-old man -- do I want the man at the sandwich shop to know I'm gay, do I need him to, do I care?

Just the other day, with the person cutting my hair, I made reference to my father-in-law -- it was clear she didn't realize my husband was a man from the pronoun she went on to use. It was like, Does she need to know I’m gay? It’s just the person who cuts my hair. But the culture is much more open, the Internet didn’t exist 25 years ago; that enormously, I imagine, complicates one’s romantic life and sexual identity and the question of how you can have control -- which you never did anyway.

Yeah, and it's much easier to meet someone these days than it was as portrayed in the books. There are just more out people, not solely in gay bars.

Meeting somebody in those days, even in America -- it was maybe a little higher-octane. You couldn’t -- you didn’t -- know if you could meet someone else who was gay.