Obama was right to bring a vote to Congress before intervening in Syria. But a worst-case scenario could greet him 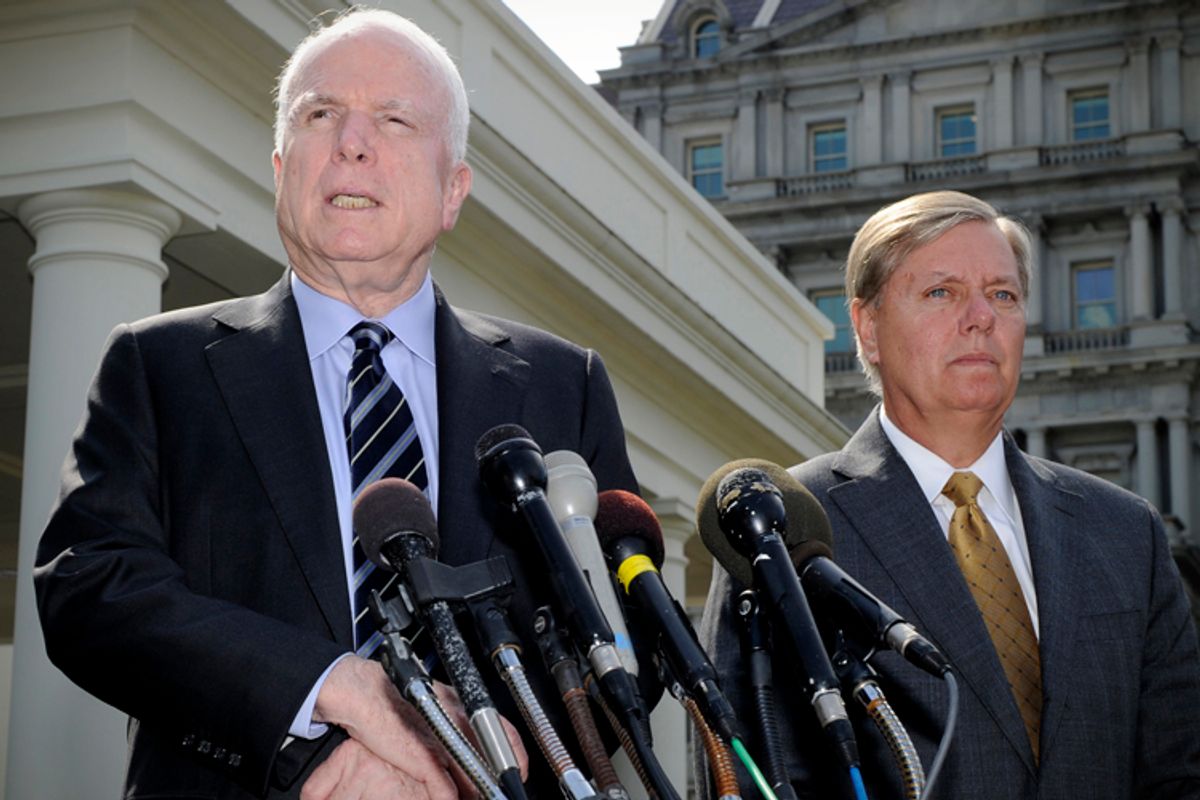 Maybe President Obama is taking advice from former George W. Bush chief of staff Andy Card, who told the New York Times why his administration didn’t make its big pitch for war with Iraq until September, 2002. ''From a marketing point of view, you don't introduce new products in August,” Card said, rather callously (he thought the first anniversary of the 9/11 attacks would make for a much better product launch). Calling war a “new product” is at best tone-deaf, and history tells us that the Iraq product launch was marked by fraudulent advertising and a faulty product – but Card had a point: A decision as important as a war, or even a “limited, tailored” military strike against Syria, as Obama has repeatedly said he backs, deserves the nation’s undivided attention – or as much of it as possible.

Politically, this has been a ludicrous summer, dominated by a resurgence of anti-Obama birtherism and new calls for the president’s impeachment, chicken-playing over the debt ceiling and a government shutdown, and more vain attempts to repeal Obamacare. It makes sense that the president wants the nation’s attention fixed on what matters most: We actually have an opportunity for a thoroughgoing bipartisan debate about American foreign policy and national security. How do we define what’s in “American interests” as we consider a strike against Syria? What represents “security” 12 years after 9/11? When must we enforce the world’s strictures against abuses like the use of chemical weapons – and what kind of backing do we need?  Should we ever go it alone?

I’m relieved that the president decided to ask for the blessing of Congress, even if he did so belatedly and after sounding determined to strike unilaterally. The question is do we have a media, or a Congress, that can handle this crucial debate.

Although you wouldn’t know it from much of the media, many questions remain about who used chemical weapons and why. (Read this McClatchy piece and this one by former State Department official William Polk for more detail on what doubts remain.) While President Obama says he has “high confidence” Syrian dictator Bashar al Assad was behind the Sarin attack, even top U.S. official have admitted they don’t have “slam dunk” proof. No one has explained why Assad would order such a strike now. By all accounts, the rebels are losing. And he didn’t attack their weapons storage facilities, communications hubs or command posts, but apparently civilians in the Damascus suburbs. We’re expected to believe he did it just because he’s a cruel madman. That’s not enough. Syrian rebels would seem to have more motivation to use chemical weapons (and blame it on Assad), given the predictable global backlash it would trigger. I am certainly not arguing that’s what happened, but it’s worth noting we don’t even have the final U.N. Weapons Inspectors’ report yet.

There are also huge discrepancies in the numbers of Syrian dead reported by various world government agencies: While John Kerry has been insisting that the number is 1,459, and includes more than 400 children, the British say it’s 350 and a Syrian human rights group puts it at 500. Now official U.S. reports have scaled it back to “more than 1,000.”

Instead of zeroing in on these lingering questions about the use of chemical weapons, the state of the Syrian opposition and what a strike is intended to accomplish, the media have mostly been horrific, focused more on depicting the president as dithering and feckless than on what’s at stake in this fight. When Secretary of State John Kerry faced all five Sunday shows this week, the hosts were determined to prove he’d been “undermined” by his boss, who’d damaged the nation’s “credibility.” (Think Progress has the low-light reel here.)

On “Meet the Press,” David Gregory blustered, “Do you feel undermined, do you think the United States has undermined its leverage in the world, its credibility having ramped up the specter of military action as being imminent and then saying, now we’re going to go to Congress first?” On “Fox News Sunday,” Chris Wallace likewise attacked Obama: “He’s going to wait nine days for Congress to come back before he takes any action, and then he goes off an plays golf? … Haven’t you handed Syria and Iran at least a temporary victory?”

Let me say personally that I don’t care that the president belatedly decided to consult Congress, after a Friday night walk with his chief of staff Denis McDonough. If only President Bush had taken a walk with Andy Card and decided to postpone, and maybe avoid, striking Iraq 10 years ago, we might have saved 5,000 American lives and another 30,000 casualties, maybe hundreds of thousands of Iraqis, and roughly four trillion dollars. The notion that an increasingly apparent paucity of good options, plus the lack of strong allies in the wake of the British Parliament’s vote against a Syrian strike, led the president to seek Congressional approval, albeit at the last minute, seems a good thing.

That is, if Congress is up to the task.

Of course there are real dangers in going to Congress. To me, it’s not that Congress will reject the authorization: I’m sold on the need for debate but not yet for intervention. If an honest, passionate debate leads to Congress rejecting the measure on its merits, or lack thereof, so be it. But the worst outcome is the most likely: That existing partisan battle lines will be hardened, and the debate is not about Obama’s preferred course of action in Syria, but about Obama personally. Which would mean even many pro-intervention Republicans would vote down the measure, while at least some anti-intervention Democrats would feel forced to vote for it to support their embattled president.

Even GOP supporters of intervention worry their party will make this a vote “about enabling a despised Democratic president,” not about “sending a message not just to Syria but also to a potentially more dangerous nation: Iran,” according to the New York Times. Even neocon Iraq war hawk Michael Goldfarb worries: "Right now, the easy Republican vote looks like the vote against Obama."

And while the president invited his persistent critics Senators John McCain and Lindsey Graham to the White House on Monday to lobby them to lobby their fellow Republicans to support a Syrian strike, they’ve made clear that they won’t back him if he doesn’t outline a plan that they believe is tough enough, by their standards, to make a difference. On Tuesday McCain told MSNBC’s “Morning Joe” that he was encouraged by Obama’s willingness to consider measures that involve “increasing the capability of the Free Syrian Army,” including providing anti-aircraft and other weapons as well as “degrading” Assad’s military capability. Of the poorly understood and ideologically diverse Free Syrian Army McCain insists,  “We know who they are,” and they are “not an extremist group.”

Not everyone agrees. Gen. Martin Dempsey, chairman of the Joint Chiefs of Staff, worries about al-Qaida elements within the rebel group and has been a voice of caution when it comes to a strike that would seriously damage Assad and tip the balance to the rebels. Likewise, many Democrats whose support for a strike will be essential are known to have reservations about any course of action that is designed to topple Assad.  Sen. Patrick Leahy is said to be leading efforts to narrow the scope of what a strike could do, possibly even ruling out ground forces (although not even McCain is backing troops on the ground right now.) It’s possible that a resolution tough enough for McCain to support will be too interventionist for Democratic skeptics.

Still, this debate is going to force McCain, Graham, Bob Corker and other Republicans who back the president’s intent to strike Syria to try to wean their party from its reflexive hatred of all things Obama, and focus them on policy, and that’s a good thing. It would be nice to see them confront that toxic Obama-hate directly. (I am not talking here about genuine GOP skeptics of intervention.) On the Democratic side, the debate could mark the beginning of a post 9/11, and post-Obama, conversation about the party’s ever-increasing hawkishness.

The worst thing for both parties, and for the country, would be for this debate to fall into the familiar dysfunctional ditch of Republicans abandoning their historic values to sabotage Obama, and Democrats putting the need to support their beleaguered president ahead of their need to craft a new national security policy. We’ll know in the days ahead whether it’s possible to avoid that sad trap.