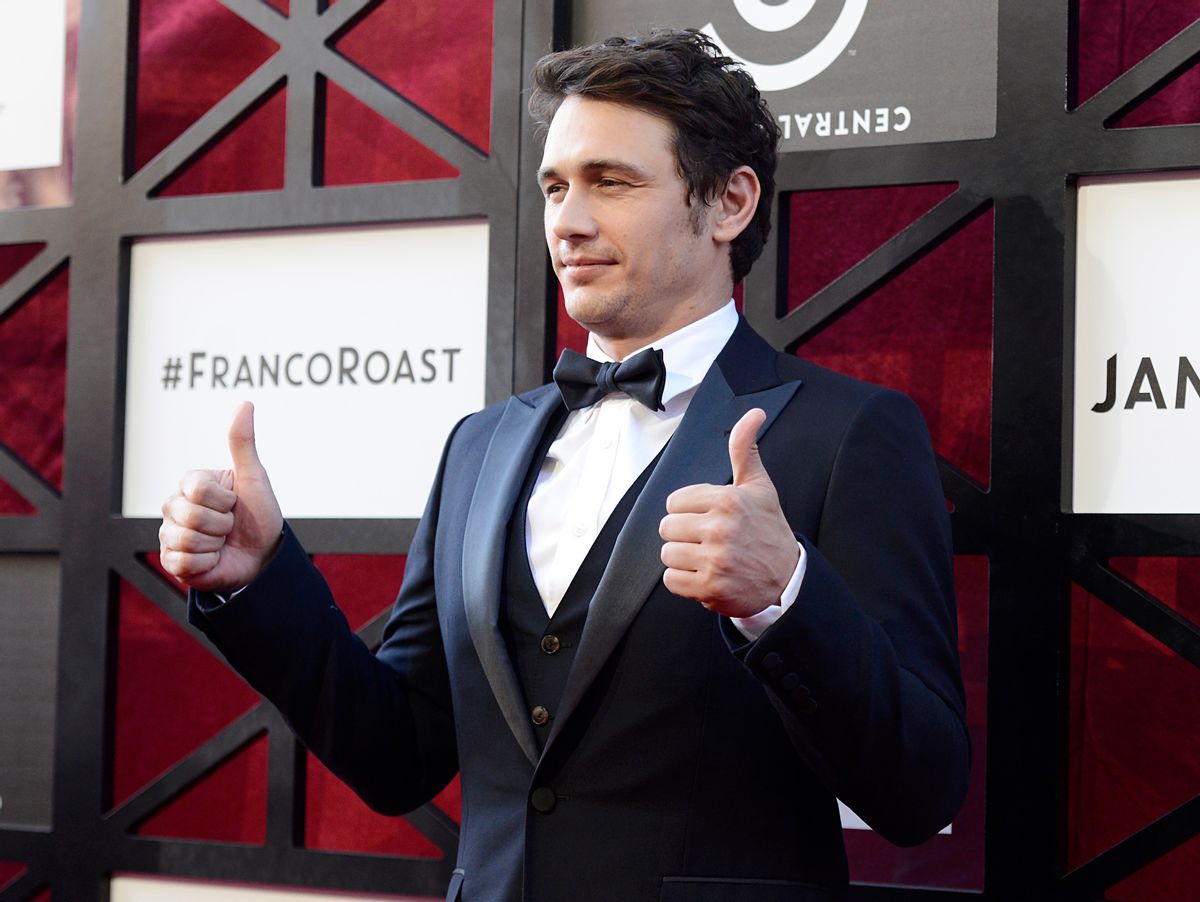 In between the bizarre homophobia and lazy jokes of the “Celebrity Roast of James Franco,” the dubious honoree managed to out-lazy everyone else with his terrible rebuttal: a bad rape joke aimed at Seth Rogen.

Seth was really hilarious tonight. But the jokes suggesting that I was gay ... coming from you, Seth, really hurts because it reminds of the time on the set of 'Pineapple Express' when Seth Rogen tried to rape me. [Rogen laughs, then shakes his head, gesturing discomfort] Forced his way into my dressing room, blew pot smoke into my mouth, [Franco laughs] pinned me beneath his sweaty, heaving, schlubby body. Luckily, he was distracted by the sound of an ice cream truck outside and I managed to break free. But Seth, the incident did inspire my latest painting, entitled, "Seth Rogen is a Gay Stoner Rapist."

The butt of the joke is Rogen, but what's actually being mocked here? That Rogen is fat? That Rogen is gay? That Rogen, a fat, possibly gay man, enjoys raping people? I mean, Franco more or less spells out his punch line for us: "Seth Rogen is a Gay Stoner Rapist."

Some people (who are wrong) may think Franco’s joke works because it’s ludicrous to imagine Seth Rogen, an affable comedian who often plays gentle stoners, forcing himself on James Franco, a handsome and edgy actor. (Actually, the joke induces a few cringes, reminding viewers of a controversial scene in Rogen's 2009 comedy "Observe and Report,” in which Rogen’s character Ronnie did rape Brandi, played by Anna Faris.) If you’re being generous, you could argue that Franco was trying to make light of something that's actually this really shitty, unimaginable thing, as comedian Patton Oswalt has explained is the impulse of many who attempt rape jokes.

But Oswalt also explains that "just because I find rape disgusting, and have never had that impulse, doesn’t mean I can make a leap into the minds of women and dismiss how they feel day to day, moment to moment, in ways both blatant and subtle, from other men, and the way the media represents the world they live in, and from what they hear in songs, see in movies, and witness onstage in a comedy club." What Oswalt says should apply to all victims of rape -- including men, who historically underreport rape, more so than women. None of them deserve to have their feelings dismissed. According to the CDC, 6 percent of American men report some type of unwanted sexual coercion during the course of their lives.

The punch line of Franco's bad rape joke is essentially, “HAHAHA Rape! Get it? I mean, RAPE! HILAAAARRRIOUS!” Not only does this add nothing to a conversation about rape -- a conversation that is already so, so stunted, but Franco’s dumb joke matters because it’s high-profile and he’s an influential figure. Every high-profile rape joke further paints “rape culture” as some absurdist concept, like “rape culture” is this flock of rabid, restless dicks roaming the skies, looking to descend upon faceless targets. But it’s not. As Oswalt states:

There is a collective consciousness that can detect the presence (and approach) of something good or bad, in society or the world, before any hard “evidence” exists. It’s happening now with the concept of “rape culture.” Which, by the way, isn’t a concept. It’s a reality. I’m just not the one who’s going to bring it into focus. But I’ve read enough viewpoints, and spoken to enough of my female friends (comedians and non-comedians) to know it isn’t some vaporous hysteria, some false meme or convenient catchphrase.

To clarify, no one is saying you can’t joke about rape. You can, and Lindy West excellently explains how, here. But if you are a celebrity with the influence of James Franco and want to make lazy jokes, just make sure that your laziness isn't harming anyone.