Instead of Christine O'Donnell's "I'm not a witch," this ad seems designed to say: "I'm not a Wall Street tool!" 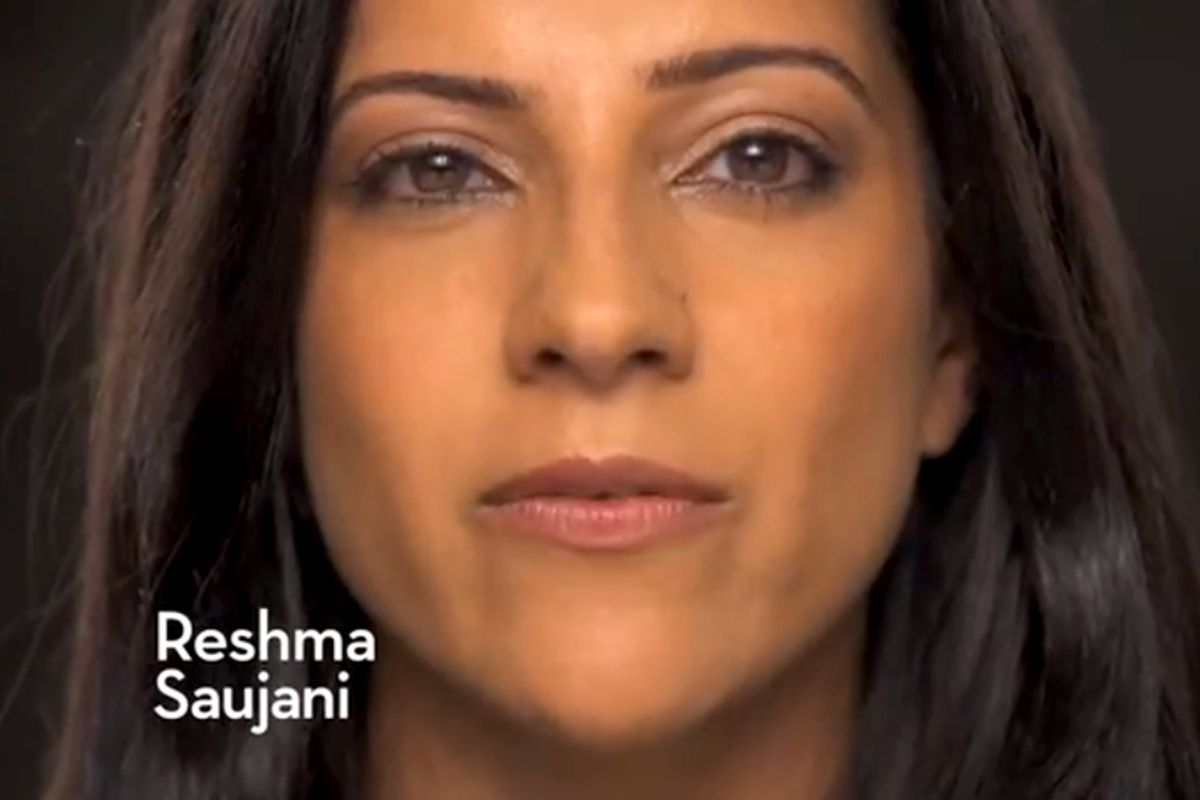 Reshma Saujani, a candidate for New York City Public Advocate, has an exciting new advertisement that has been airing quite a lot lately out here.

Powerful, personal, direct. This is good stuff. The name of the ad is "One of You." It just seems like something is missing, right before Saujani actually says, "I'm one of you," at the end. What is it, again? Oh, right, "I'm not a witch."

Yes, the first ad of the 2013 Saujani campaign seems not just reminiscent but downright imitative of the single funniest ad, from the most ridiculous major candidate, of the 2010 midterm election cycle. Delaware U.S. Senate nominee Christine O'Donnell's ad, from respected campaign ad wizard Fred Davis, was a damage control job meant to address the fact that one of the only things voters knew about O'Donnell was that she'd dabbled in Wicca. Saujani's ad, from respected campaign ad wizard Jimmy Siegel, seems designed to only indirectly respond to the one thing some voters might already know about Saujani. The unspoken claim is, "I'm not a Wall Street tool."

Saujani last ran for office in 2010, when she mounted a primary challenge against longtime Democratic Rep. Carolyn Maloney. Saujani lost, badly, in part because Maloney wasn't really a vulnerable or unpopular candidate but also undoubtedly in part because Saujani's entire campaign was built around her being friendly to the finance industry. (Or at least that was what it was built around at first, until her campaign realized the district didn't just include the Upper East Side, at which point they panicked and pretended that Saujani totally did not repeatedly claim that the impetus for her run was her belief that Wall Street needed a friendlier ally in Washington.)

This time around Reshma Saujani is running more as the candidate of the tech industry than the candidate of Wall Street. This is smart and necessary, because New Yorkers do not hate the tech industry as much as they hate Wall Street. (In terms of the people whose lucrative work is most responsible for ruining New York, tech people are a distant third, after finance people and developers. But keep an eye on the Bay Area if you want to see how quickly things could change.) This rebranding has not been without its hiccups. Months ago, the Saujani campaign admitted to editing -- heavily editing -- her Wikipedia page to remove her entire finance background, which is to say her entire professional career up until her failed run for office.

Saujani now says she only ever worked on Wall Street to pay off her student loan debts -- why didn't I think of that? says every heavily indebted underemployed college graduate in unison -- and she wants everyone to know that she merely spent years as a lawyer for a series of hedge funds and financial firms.

But Ms. Saujani, who since been accused of running away from her résumé, said that her work in the finance sector was exaggerated, and balked at being described inaccurately as a former hedge fund manager or investment banker in the press.

“I’m not gonna apologize for working in financial services, but I was a lawyer,” she said, explaining that the campaign had called “over and over and over again” asking outlets unsuccessfully to make corrections. “And so I never could get out of that narrative … No one wanted to talk about the daughter of refugees” whose first job was with Baskin-Robins and began working in local South Asian politics, rallying the community to support John Kerry’s 2004 presidential bid, she said.”

She wasn't one of the dirty, greedy bankers, just one of the well-compensated people who defended them when they were accused of committing fraud. (She was the chief operating officer of one fund, at Carret Asset Management, but that's a minor quibble.)

Saujani's campaign for a municipal office with essentially no real responsibilities has the sort of high-priced team put together for U.S. Senate campaigns, including Democratic adman Siegel and strategist Hank Sheinkopf -- a longtime Democratic campaign consultant who, in 2009, worked for the other side when Michael Bloomberg outbid Democrat Bill Thompson for his services -- and she still has the personal support of many of the same wealthy elites who financed her last bid. Steven Rattner and his wife, Maureen White, have both donated the maximum amount allowed by New York law to Saujani, as did Morgan Stanley chairman emeritus John Mack.

Despite all of this experience and money, Saujani has failed to to surge to the front of the pack in a race that has been mostly ignored in favor of the mayoral and, unexpectedly, comptroller races. A mid-July Wall Street Journal poll had Saujani in last place with 4 percent. An Aug. 16 Marist/Wall Street Journal poll had Saujani at 3 percent. Fifty-four percent are undecided. Oddly, "front-runner" state Sen. Daniel Squadron -- the only other candidate with a serious TV ad presence, with his ads featuring a personal endorsement from Sen. Chuck Schumer -- is barely doing any better, at 9 percent in the more recent poll. Squandron and Saujani have battled each other as if they're both on top. Saujani's campaign amusingly/nastily refers to Squadron as "Trust Fund Dan." (He is indeed a minor scion, though his inheritance was made much less impressive by Bernie Madoff.) They also accuse Squadron of "touting his Wall Street big bucks," which makes this the second election in a row in which Saujani has received thousands of dollars of money from people involved in finance, the industry she spent years of her own life working in, and then accused her opponents of excessive coziness with Wall Street.

Meanwhile, two women few New Yorkers are very familiar with, Council Member Letitia "Tish" James and college professor Cathy Guerriero, have led both polls, despite Guerriero and James having much smaller campaign war chests than Squadron and Saujani. Either of them, in my opinion, would be a fine public advocate. Is their unexpected position atop the polls another benefit of New York City's public financing system, which, as Alec MacGillis writes in the New Republic, lessens the impact of large donations and magnifies the impact of smaller ones? (It's notable that uber-elite Dem donors White and Rattner also maxed out their donations to flailing mayoral former front-runner Christine Quinn.) Or is it just a bit of odd statistical noise in a race few are even paying attention to?  Either Squadron and Saujani's cash will allow them to eventually outpace their less-rich () rivals in time for next week's primary election or they're both just throwing money into a void, and voters will be too busy worrying over the other races to give the public advocate any thought until they're in the booth.

As for me, I'm hoping for another devastating Saujani loss, partly because I despise the industry most responsible for her presence in city politics, but mainly because I'm excited to see what sort of candidate she'll be next time she makes a doomed, expensive run for office.

UPDATE: I should apologize for imprecise language. I said "liberal" when I meant "populist." Guerriero's running as a barely funded outsider insurgent, but she's got slightly cryptic stances on issues like policing.  Squadron's more establishment, but his liberal bona fides are good. (Saujani's also trying to run as an outsider populist but she's bad at it.)