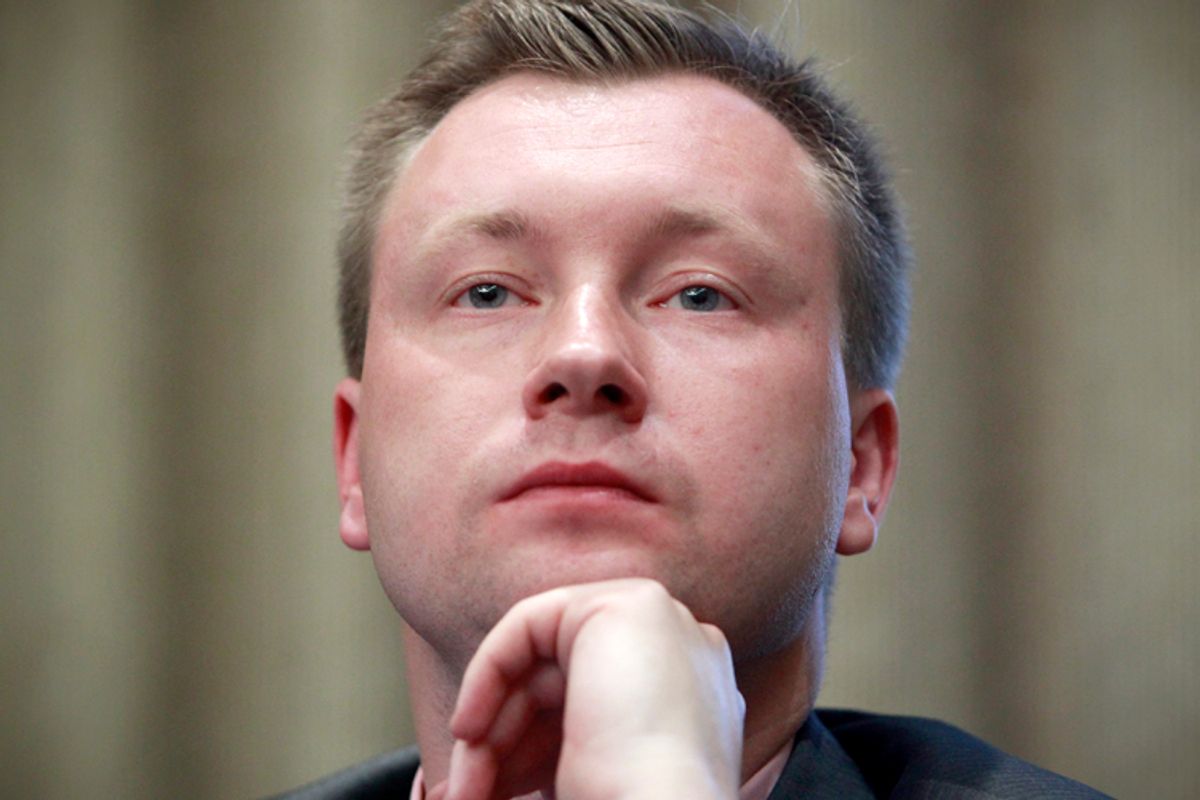 For years, Nikolai Alexeyev was one of the most prominent figures in Russian LGBT activism. The chief organizer of Moscow Pride, Alexeyev has boasted of being arrested many times and beaten in front of cameras. He has, to his credit, successfully sued the Russian government several times in international courts.

In a series of events over the past two weeks that can only be described as bizarre, Alexeyev has done so much damage to his reputation and credibility as an activist that one wonders what the future holds for him -- and for homegrown LGBT activism in Russia.

Early last week, Alexeyev, in a rambling, nearly incoherent piece in the Russian Times, dismissed the calls for a boycott of the Sochi Olympics and all the outcries against Russia's ban on "gay propaganda" as efforts led by expatriate Russians with no ties to the Russian LGBT movement. He went so far as to accuse several expats of using the ban to falsely obtain visa asylum from the U.S. and Canadian governments.

One of those mentioned in the article is Alexander Kargaltsev, a photographer and artist currently living in the U.S. In response to Alexeyev's accusations, Kargaltsev told me: “Mr Alexeyev is [someone] I have admired for many years for his principled stand against discrimination at the highest levels against the LGBT community in Russia today. It is all the more disappointing then to read in Russia Today his attack on me and others who have sought asylum in United States."

He added, "There is a long, long history in totalitarian states of the victims being encouraged to [say] that things just are not [that] bad.”

Then, on Wednesday, Alexeyev announced via Facebook and Twitter that he was quitting LGBT politics altogether, due to “American insults and slanders,” in particular a damning piece by Michael Lucas in Out magazine that traces Alexeyev's sudden transformation from a vociferous opponent of the Putin government's anti-LGBT policies to someone who sees “no single hint of gay oppression” in Moscow and “hates the West not less than Putin.”

In his article, Lucas, wondering what could have led to such a dramatic turnaround, draws a parallel to the Anti-Zionist Committee of the Soviet Republic in the 1980s:

“In 1983, a desperate Russia tried some public-relations trickery. The Department of Propaganda set up the Anti-Zionist Committee and recruited or pressured various prominent Soviet Jews — soldiers, writers, artists, scientists — to join it. To decline meant repercussions. The idea was to show that even the Jews themselves agreed with the Kremlin’s smears.”

"If 'gays are the new Jews' in Russia,” Lucas continued, “then Nikolai Alexeyev is the new Anti-Zionist Committee.”

From there it only got worse. One post, titled “Kidnapped,” showed pictures of Alexeyev partly naked. And then came a series of  viciously anti-Semitic tweets and posts, mainly against Lucas — even one threatening to hire a contract killer against the writer.

By Friday, Alexeyev was referring to his apparent meltdown as a “social experiment,” both to BuzzFeed and on Twitter. And in an appearance on the Kremlin-financed news network Russia Today, Alexeyev denied that he had ever threatened to quit LGBT activism, accusing “tabloids” of making the story up. When several followers on Facebook pointed out to Alexeyev that he had tweeted and posted those things himself, Alexeyev asked these followers how they even knew if it was really him, suggesting that his account might have been hacked. Of course, Alexeyev can't have it both ways — either he was engaging in a social experiment or his account was hacked.

Most recently, after being dropped as a speaker for the Human Rights' first summit in December,  Alexeyev blamed the “Jewish American Mafia” for “fucking up” his participation, and proceeded to post more rabidly anti-Semitic posts to Facebook and Twitter all day.

We may never know what has caused Alexeyev's spectacular unraveling -- whether any of it can be attributed to Kremlin-induced pressure or whether,  as some bloggers claim, this outrageousness is typical for him. He has not yet responded to my request for comment for this story. This recent resurfacing of anti-Semitism, however, is quite troubling, and certainly is reminiscent of earlier attempts by the Russian government to scapegoat Jews for political gain. Even Abraham Foxman of the Anti-Defamation League has compared the plight of Russian gays to that of Soviet-era Jewry.

All of this begs the question: Just how does the Russian LGBT community move forward when its most prominent voice loses his credibility?

Last Tuesday, Nation publisher Katrina vanden Heuvel published an Op-Ed in the Washington Post raising concerns about the calls for a Sochi Boycott by many Western LGBT activists. The piece brings up many now-familiar arguments about the need to understand how different Russian culture is and the potential “prize” Western activists may be offering Putin by allowing him to raise his standing with the powerful, anti-West, traditionalist majority in Russia. She even mentions the true, if irrelevant fact that Stolichnaya is bottled in Latvia.

"Doesn’t a truly effective fight for LGBT rights need to be waged in Russia by Russians?"  Vanden Heuvel writes.

It strikes me as remarkable how many people seek to dismiss the efforts of Westerners (including activists such as Harvey Fierstein and Dan Savage and journalists such as John Aravosis and Richard Socarides) with the refrain that Russians need to deal with this issue internally, given that the propaganda ban effectively denies Russian LGBT citizens the right to protest freely. When the most prominent LGBT activist in Russia has a wild, public meltdown, under fairly suspicious conditions, the argument that the Russian LGBT community needs no outside help starts to seem suspect. Just yesterday, Dmitry Isakov became the first Russian activist to be arrested under the new gay propaganda law, a law Alexeyev curiously said on RT was “never enforced.” Last week there were reports of Russian police raiding the homes of LGBT activists as well as sightings of fliers encouraging people to report their LGBT neighbors to local authorities. This is the “political and social reality” that Russians are facing.

There's something eminently reasonable about asking people to “ask the right questions” and “develop a more strategic response,” as Vander Heuvel does in her article. It only further brands those who disagree with her as radical. The question remains, however, if this is really the time for us to be “reasonable.” Should Putin be allowed to stage a hassle-free Olympics, free of protest and controversy? Can't the case be made that vague admonitions of caution are playing more into Putin's hands than the public outcry, which at the very least has raised considerable media attention? Would President Obama be meeting with LGBT activists at the G-20 Summit in St. Petersburg, as BuzzFeed now reports, if not for this outcry?  When will the spotlight ever shine as brightly on the struggles of LGBT Russians as it does right now, leading up to that most international of events, the Olympics? Rest assured, when the games are done, the news media will move on to other issues, as it always does.

By now it must be clear that the Kremlin is not ignoring this issue, and is taking measures accordingly. The Olympics should move out of Russia — perhaps even be postponed a year, if necessary. We have a responsibility to speak up for those who cannot do so.  This is exactly what the propaganda ban is about: denying a class of people the right to stand up for themselves.