Wolves have helped revive songbird, beaver and bear populations, so why are they delisting this endangered species? 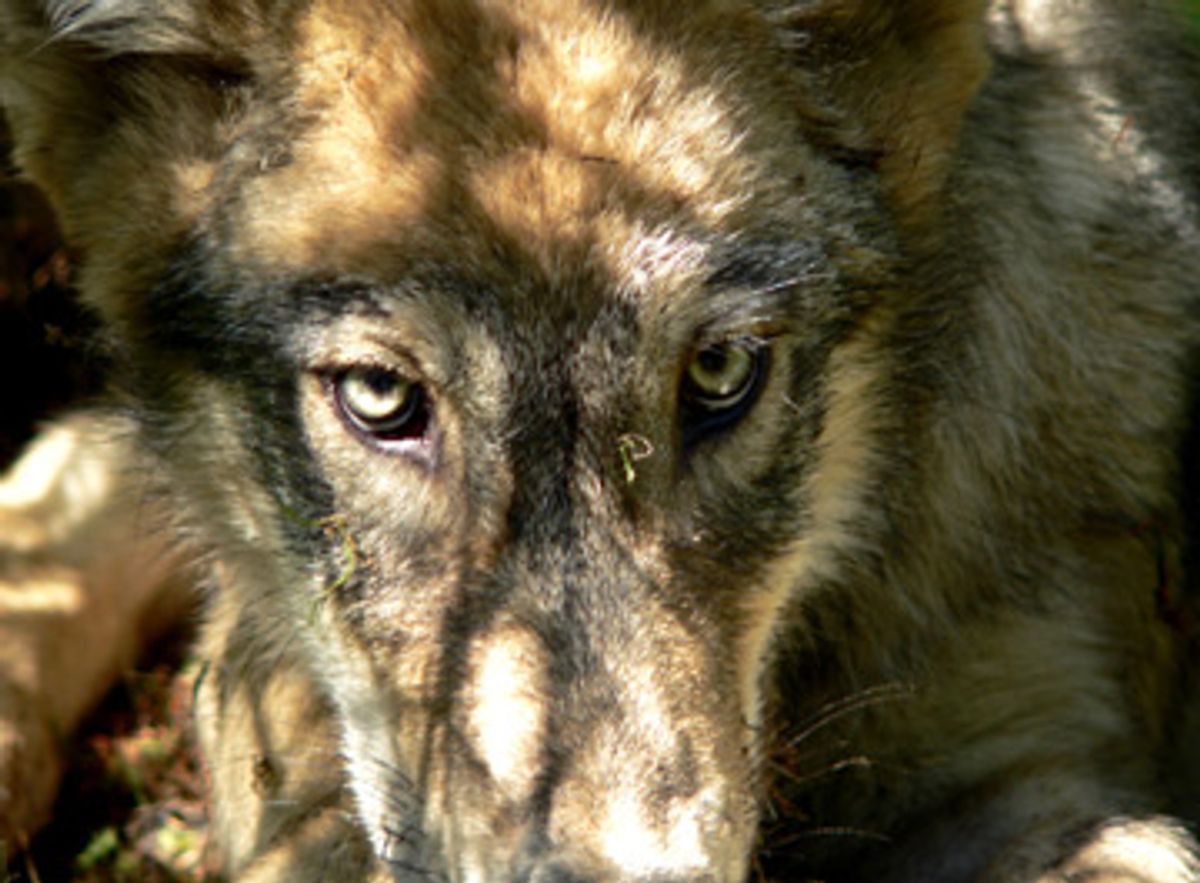 Sept. 3 (Bloomberg) -- The air in Yellowstone National Park is chilly at the crack of dawn, even in August. If you want to see a wolf, you get up early and shiver.

“It’s more difficult right now to spot a wolf,” says Marc Cooke, president of Wolves of the Rockies. He means both the time of year -- wolves are less active in summer -- and the recent decline in wolf numbers, which he attributes to “the devastating impact from the needless trapping and hunting season.”

At last count there were 95 wolves in the park, traveling in 11 packs. A few years ago there were almost twice as many. Part of the decline is due to the natural ebb and flow of ecological systems, but hunters can legally shoot wolves when they stray outside the park into Wyoming, Montana or Idaho, even if they’re wearing radio collars.

Just last week, a collar-wearing female wolf that had killed a chicken was shot by a resident of Jardine, Montana.

As tenuous as the population is, the U.S. Fish and Wildlife Service has proposed to delist the species, which is currently designated as “endangered” or “threatened” in most of the lower 48 states. The wolf would still be protected in Yellowstone, but would be at the mercy of bloodthirsty types just outside the park when the hunting season opens in September.

After a couple days, I finally catch the briefest glimpse of a pair of black wolves, loping over a rise and out of sight in the park’s stunning Lamar Valley. Though I’m looking through a spotting scope and the wolves are more than a mile off, the scene takes my breath away.

As an apex predator, wolves are essential to an ecosystem’s health. Soon after reintroduction to Yellowstone in 1995, wolves helped cull the overpopulated elk herds. This led to a rejuvenation of verdant ground cover that the elk had been mowing down, which in turn attracted animals that rely on low foliage for cover and food.

Yellowstone wolves are undoubtedly responsible for a renaissance of songbird and beaver populations and a lot more.

“You could argue that they’ve affected everything through the system,” says wolf biologist Doug Smith, Yellowstone’s longtime wolf project leader. “Wolves have been good for fish, reptiles, amphibians and invertebrates.”

Wolves are even good for another top predator, the grizzly bear, which feeds on berries that bounced back with the reappearance of wolves.

Wolves are even good for the elk herds on which they feed, since they tend to cull weaker members, thereby improving the stock. Contrast that dynamic with the human hunter, who targets the biggest specimens for his trophy.

Hunters say the wolves are depleting the native elk populations; ranchers fret their livestock is at risk. Both claims have a scintilla of truth in them, but are mostly overblown. Unfortunately, ranchers and hunters have political clout in these parts.

“With 1,500-plus wolves killed in Montana, Idaho and Wyoming in the last three years by wildlife services, hunting and trapping, we are on the road to the second eradication of wolves in the Rocky Mountains,” laments Cooke. “Clearly state fish and wildlife agencies are not using the best available science. Instead, they appear to be puppets of the hunting and livestock producers, who have an obvious anti-wolf agenda.”

I spend a little time in and around Gardiner, Montana, which sits just outside the northern entrance to Yellowstone and, as such, enjoys a great deal of commerce from wolf-friendly visitors and hunters alike. The Gardiner Chamber of Commerce, wishing to alienate neither group, calls itself neutral on the wolf question.

Reflecting this Swiss-like positioning is Gardiner businessman Zabun Burton, who runs the Iron Horse Bar & Grill and rents cabins to both hunters and wolf watchers.

“If people tell me they’re pro-wolf, then I’m pro-wolf. If they say they’re anti-wolf, I’m anti-wolf. I run a business, and I don’t want anarchy.”

The public can comment on the delisting proposal by Sept. 11 at . www.fws.gov/graywolfrecovery062013.html

(Mike Di Paola writes on preservation and the environment for Muse, the arts and culture section of Bloomberg News. The opinions expressed are his own.)

To contact the writer of this column: Mike Di Paola at mdipaola@nyc.rr.com.

To contact the editor responsible for this story: Manuela Hoelterhoff in New York at mhoelterhoff@bloomberg.net.