All the jokes about Franco's sexuality weren't surprising (such humor's all too common). But they sure were lazy 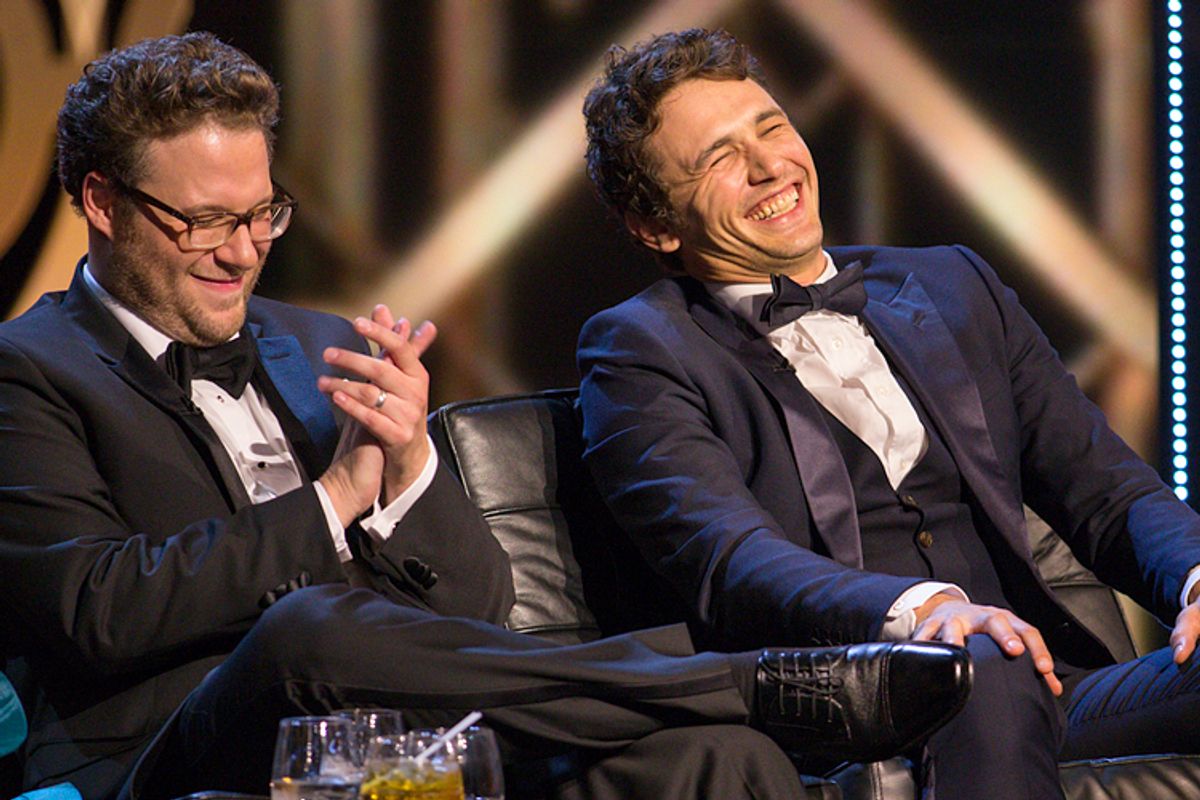 Did I think there were too many gay jokes? Way too many. Did I think the humor was lazy? Even without the homophobia, the festivities felt awkward and forced -- especially on my end without the benefit of the weed in which nearly everyone on the dais seemed to have partaken. Was I outraged? Nah. Come on, son! I’ve been listening to rap music my entire life. While the tactic is hardly exclusive to hip-hop culture, assigning gayness as a way of instantly impugning another’s character, worthiness or talent doesn’t shock me. Does it disturb me? Well, sure. But, just as with the music I grew up loving, what really bothers me is how reducing homosexuality to a label, insulting or otherwise, limits the possibilities of inclusion and perspective.

While watching Franco’s roast, I had a lot of time to think between actual laughs. I found myself wondering what the presentation would have been like had the good people at Comedy Central thought to include, say, Todd Glass among the panel of Franco’s faux-detractors. In case you don’t know, Todd Glass is a respected, openly gay stand-up comedian who only recently came out in the past few years. I’m not advocating for a token gay comic on the dais. But including a member of a group isn't always tokenizing. Aziz Ansari performed at the roast -- was his inclusion just racial tokenism? Glass is only slightly less known outside of comedy circles than Nick Kroll, Jeff Ross and Natasha Leggero -- all of whom received the coveted call to poke fun at the young leading man. So why not a nod to diversity?

Would it have upset the flow of the proceedings so much if Glass, or someone like him, had strolled up to the podium and said, “I’m actually gay, yet I have never screwed nor have the desire to screw James Franco. And also, he was awful in that 'Planet of the Apes' movie.” Or, if he had simply stood up and asked, “Why so many gay jokes?” (Actually, Aziz Ansari pretty much did. And his response to his own question was smart and funny enough. The roasters after him, apparently unable to rework their material on the fly, continued on as if the already-lame angle had not been irreparably sullied.)

The question of why so many gay jokes in last night’s telecast alludes to a bigger question that had been running through my mind ever since I knew this thing was airing: Why the hell did anyone decide to roast James Franco? Seriously, I was so confused that I felt the need to Google what a roast actually was. And, sure enough, Askmen.com’s list of Top 10 Celebrity Roasts includes the names of larger than life world changers like Johnny Carson, Hugh Hefner, Muhammad Ali and Don Rickles. (Yes, the list also includes Bob Saget and Denis Leary, but those guys have at least earned their stripes and their licks.)

Franco is young and attractive and merely at the beginning of a potentially roast-able career. We all have our feelings about “127 Hours,” “Milk,” “Pineapple Express” and his Oscar-hosting stint with Anne Hathaway. Some of these turns even merit debate in a bar or living room setting, but an hour on cable -- even basic cable -- seems a bit excessive. According to the commercials that aired during the roast, Franco’s got a couple of interesting projects coming out, but clearly none that his famous friends thought would be more exciting than outing him.