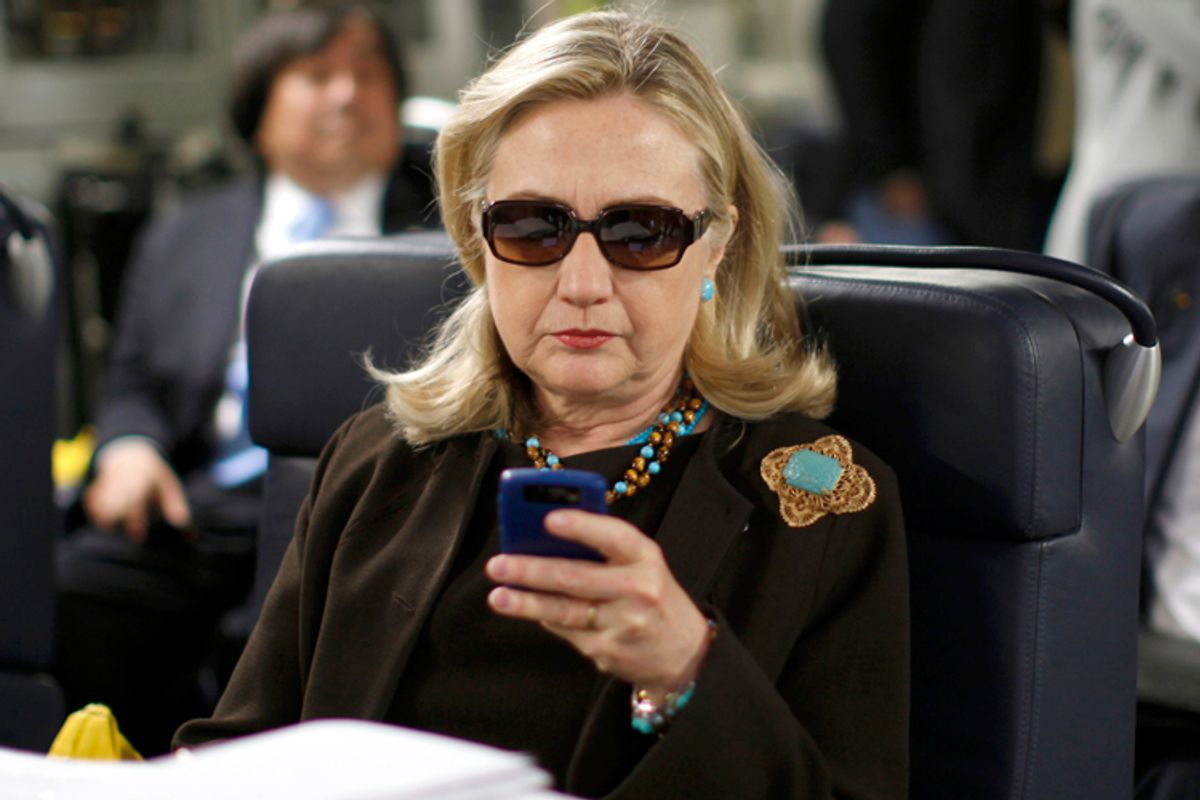 Over the weekend, Diana Nyad successfully completed her swim from Cuba to Florida -- quite the feat! Former Secretary of State Hillary Clinton took the opportunity to congratulate Nyad, and, in so doing, more heartily congratulate herself.

Leaving aside the fact that Clinton, or whoever tweets for her, uses up so many characters praising herself that she doesn't have room for a proper noun elucidating to whom she's speaking, this is among the most tone-deaf moments yet for a political figure usually far more adept. Flying between countries is literally a baseline requirement for the Secretary of State job that has made Clinton a credible potential presidential candidate, not a terrible hardship on par with days of uninterrupted swimming.

Can a news event happen without Clinton reminding us of just how hard she worked until just before the crisis in Syria erupted? (That's the sort of event on which Clinton's take would be welcome -- but, of course, it can't be answered with a pithy joke about how hard she worked!)

Clinton isn't very active on Twitter, but her tweet at Nyad wasn't the first time she's hijacked a news event to make a somewhat incoherent joke about her résumé.

Get it, Kate and Will? Hillary Clinton is an extremely famous person who's been famous since the 1990s, when she wrote a book called "It Takes a Village." This is the only way this scans, as -- of course -- the Duke and Duchess of Cambridge will have plenty of childrearing support. As for how non-famous parents might manage to raise their children in less glamorous circumstances, @HillaryClinton has no time for that.

Bill Clinton is little better; using the occasion of Barack Obama's birthday to remind his followers that he was also president once:

Get it? Bill Clinton is retired, just like these famous athletes, except instead of being an athlete, he was the President! The Clintons' Lady Gaga-ish interest in fame is hardly new, from the Clinton Foundation's reported financing of Natalie Portman's airfare to Bill's celebrity-packed birthday parties to Hillary's strange tribute video to Heather Mills during Mills's divorce from Paul McCartney and the 2008 campaign. But placing all this celebrity interest in one Twitter feed is overwhelming: After a while, reading the Clintons' tweets brings to mind the cover line on a fashion magazine featuring Kim Kardashian, another professional celebrity: "It's all about me / I mean you / I mean me."

(By contrast to her parents' constant engagement with the stories of the day as they relate to themselves and with celebrities, Chelsea Clinton's Twitter feed seems deeply earnest; she seems to really be interested in privacy, charitable causes, and #Progress.)

There is no one "right" way to be on Twitter, and the Clintons' self-regard is at once of a piece with personae as self-involved that they'd done a good job to put behind them during the Obama years and with Twitter's self-promotional mien. Perhaps the Clintons are no worse than politicians who tweet self-congratulatory items about their legislative achievements, but at least contemporary politicians are doing more than expecting laurels for being famous.

The skeleton key to why the Clintons are quite so obnoxious on Twitter may lie in Bill Clinton's engagement with his wife and daughter.

"#tweetsfromhillary" is a reference to the "Texts from Hillary" meme, in which an image of Hillary Clinton texting while wearing sunglasses (her Twitter icon) was perceived as immediately iconic and representative of a celebrity frisson greater than your usual diplomat's. The Clintons have evidently bought into the idea that they exist on a plane elevated beyond the give-and-take of daily politics; they are the wellspring from which news flows, and if a story or public figure can't be tied back to themselves, it doesn't exist.

Then again, Hillary Clinton's tweet to Nyad about how hard she worked as Secretary of State has 2,650 retweets as of this writing. Given the very nature of celebrity worship underpinning American life, maybe they're not entirely wrong.