Is this the gay Lena Dunham? 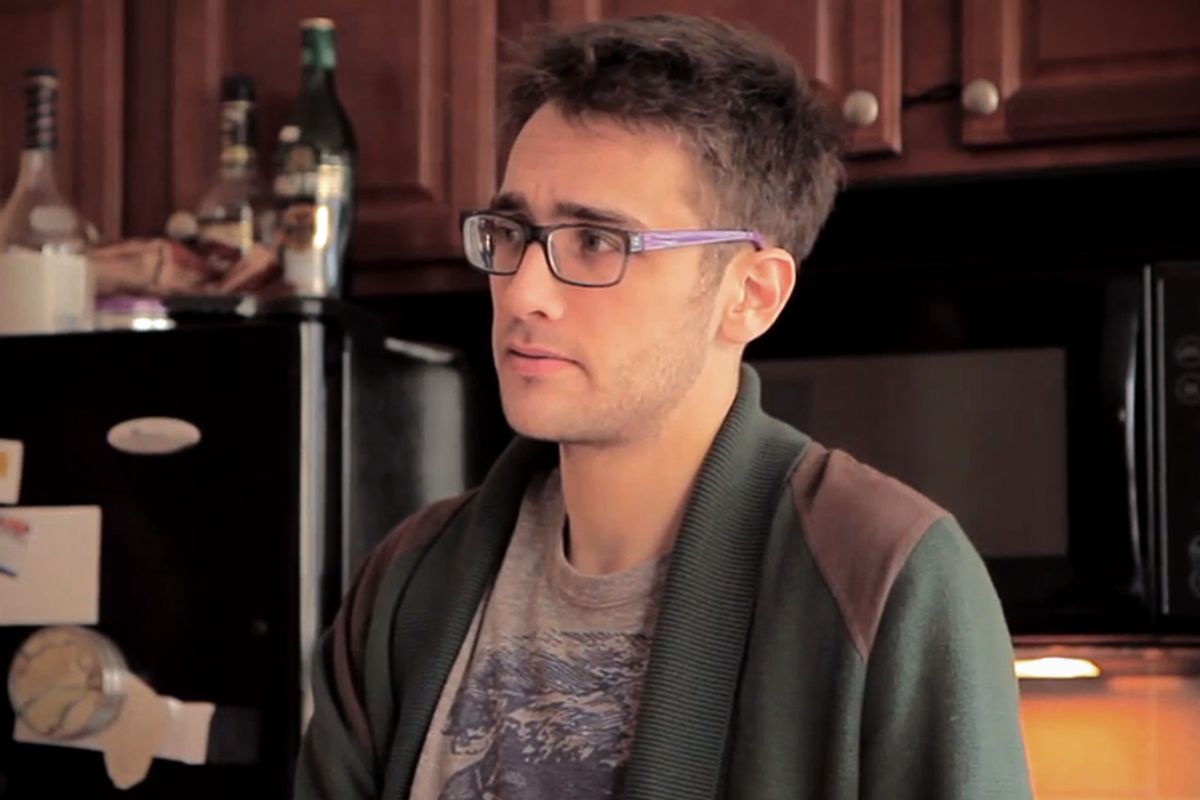 The television landscape is little better for gay characters than it was 10 years ago. At the end of last season, several shows with gay characters, including "The New Normal," "Smash" and "Happy Endings," were canceled (these shows, to be clear, were of wildly varying quality). Practically all that's left among returning shows are the paired but not exactly intimate "Modern Family" couple, who at this point seem like acquaintances who like to fight, and the kids on "Glee." It's enough to make one nostalgic for the parade of short-term boyfriends Sean Hayes' Jack cycled through on "Will & Grace" in the early 2000s, but don't worry, Hayes is returning to TV this fall, as there are few new ideas under the sun.

The Internet is more fertile ground, it'd seem, for representation of gay characters -- particularly for young Adam Goldman, whose Web series "The Outs" has become, in certain circles, one of the most talked-about works of art about a gay person of the past year. "The most accurate and essentially human portrayal of young gay men today can be found on the Net, not the networks," wrote Interview; the Paley Center for Media is hosting a panel on the series along with discussions on "Orange Is the New Black" and "Boardwalk Empire." Goldman recently raised some $170,000 for a follow-up series on Kickstarter, and was invited to the White House on the back of the series.

And yet the series paints less a picture of what it's like to be gay than about what it's like to be a creative-class Brooklyn resident with rent just a little bit too high to afford. The series documents the aftermath of a breakup experienced by a temperamentally mismatched couple -- who are similar, though, in many demographic descriptors. The only other primary character is the couple's straight female friend, much the same demographically (naturally). The existence of "The Outs" as a sort of standard-bearer for gays on-screen -- at a time when, in the gay-centric media, coverage of Russian human rights violations lives uncomfortably next to pictures of shirtless athletes -- seems particularly apropos. It's a tiny corner of experience; if broadcast networks try to use "Modern Family's" central gay couple to broadly appeal to many, "The Outs" is, surprisingly given its relative success, spiky and particular. The story of what it means to be gay has never seemed less unitary, and "The Outs" breaks off a small piece of that experience in just the same way as a recent HBO sitcom.

"When it's other shows, like 'Orange Is the New Black' or 'Girls,' when there's not a lot of a particular voice out there -- in the case of 'Girls,' people in their mid-20s," Goldman told Salon, "people project onto that work the expectation of representation. Certainly the way 'Girls' is marketed."

Goldman claimed to have "inoculated" himself against criticism of the show, but noted that he'd come in for criticism online for portraying a particular set of experiences. "When the first episode of 'The Outs' came out and began with the character of Jack having anonymous sex, I went online and saw two comments right next to each other. The first said, 'Oh, great, another representation of the slutty gay man, that's really great for the community. Way to go.' The second one said 'Oh, great, another representation of the gay man with all of these dark mental problems, why can't he just be a happy slut? Way to go.'

"Anything I do, there are infinite perspectives on it. It's really just about telling the story. There are very specific reasons why he's having the sex he's having. There is no way to represent an entire community. It's a really, really tall order."

Much as "Girls" creator Lena Dunham was criticized, upon the launch of her show, for the generally white and upper-middle-class mien of her series, so has Goldman been, at least in comments sections; much as Dunham did on NPR's "Fresh Air," Goldman has explained himself as someone conveying his own experience, not a generation or scene. "People have said the racial makeup of our show is not what it could be, and I think that comes down to the fact that the show basically has three main characters. Those are people that I knew or they're me. It wasn't that we set out to represent anyone. The goal of the show was not to represent anyone but to tell a story about these characters."

Besides, it's an open question as to whether there's such a thing as a gay community anymore; in an age of widespread equality, do we need separate everything? And who defines the mores? The show certainly doesn't set out to investigate that question. "I don't know what the gay experience is. I only have my own experience," said Goldman. "And I think that it's kind of a funny and maybe a little antiquated notion that there is a gay experience. Maybe when gay people were being publicly discriminated against everywhere, there was more of a gay experience? I don't know! That term falters, and it's not useful language anymore. Someone can claim we fail to represent them but I don't think it's a relevant comment on the work. It all comes down, artistically, to the goal; we are not trying to represent, for example, the entire queer community with this show.

"When people get disappointed about there not being a community, I'm not sure what they want. It sounds like people want a secret city under the ocean where we can all hang out. That doesn't exist for any community. The community is really wide, people have different opinions."

The success of "The Outs" has been an education for Goldman, who said the series had been intended as a "résumé piece for everybody" to prove they could make TV. "We considered that we were making it for a much smaller audience than the audience that ended up viewing the show. We screened the first one for 25 people at a bar," he said. "We had no idea people would want us to represent a wider range of people." Goldman's Kickstarter-funded new series, titled "Whatever This Is," is not specifically about gay people at all, with a cast that's still composed of young creatives but diverse in all its particulars -- lesson about the difficulty of broadcasting a narrow slice of experience, perhaps, learned.