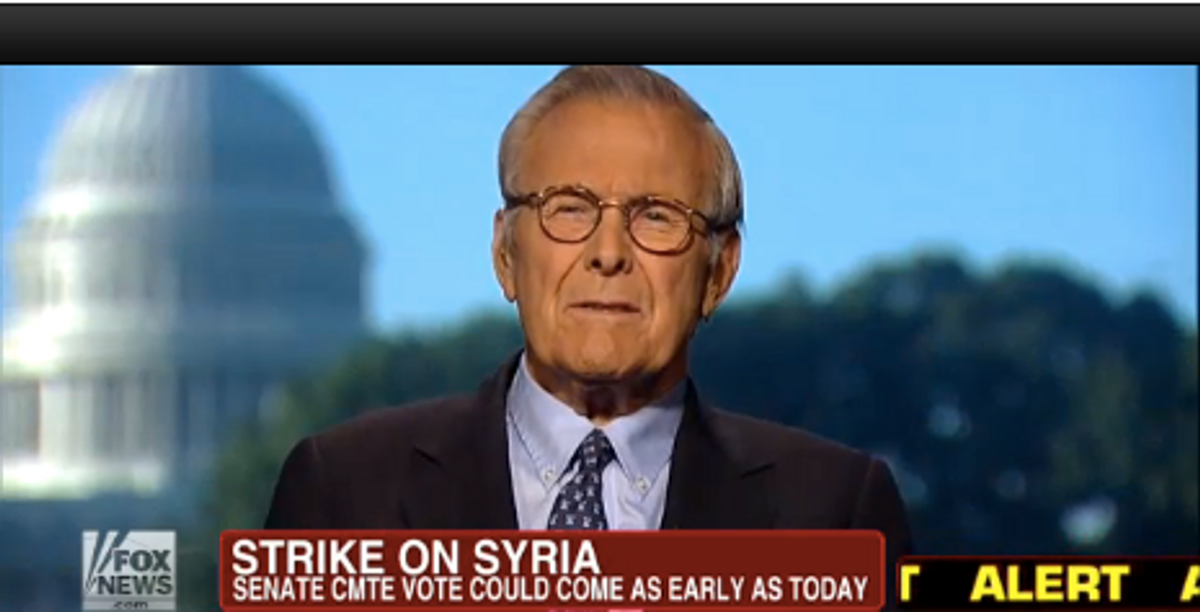 Donald “stuff happens” Rumsfeld attacked the “so-called commander in chief” for “not providing leadership” on Syria, by which he seems to mean just bombing the place and not recalling what happened later.

“The essence of leadership is clarity and a vision” Rumsfeld educated the cast of “Fox and Friends” this morning. Throughout his lifetime, Rumsfeld said, the Middle East has been “a dangerous place a place with conflict war and a lot of killing. That’s not going to get solved by our country.” So much for clarity.

The presidency is a tough job, Rumsfeld continued but “I would dearly like him to stand up and say what he believes rather than blame to blame others and lay off responsibility on others.”

As quoted in The Hill

“It seems to me that if you’re going to do something you should do something that has a value and a purpose, rather than sending signals out that what we’re going to do won’t be much, won’t last long, and won’t end up with any changed circumstance on the ground,” said Rumsfeld.

“I think that’s unfortunate and I think that’s reflected in the fact that the American people are confused by it, the Congress is confused. He doesn’t have the kind of support that President Bush had in respect to his military actions.”

Rumsfeld finds Secretary of State John Kerry “persuasive and forceful” in his push for an attack on Syria. One reason attacking Syria is controversial is fear of creating making a disastrous situation even worse. The hosts on Fox and Friends appear to have forgotten that when Donald Rumsfeld led the Department of Defense the U.S. attacked a sovereign nation and predicted the war would last less than six months.

The entire video is worth watching for its almost surreal disregard for Rumsfeld's record.  The word 'Iraq' goes unmentioned.