"The League" creator: "Most sitcoms are not very good" 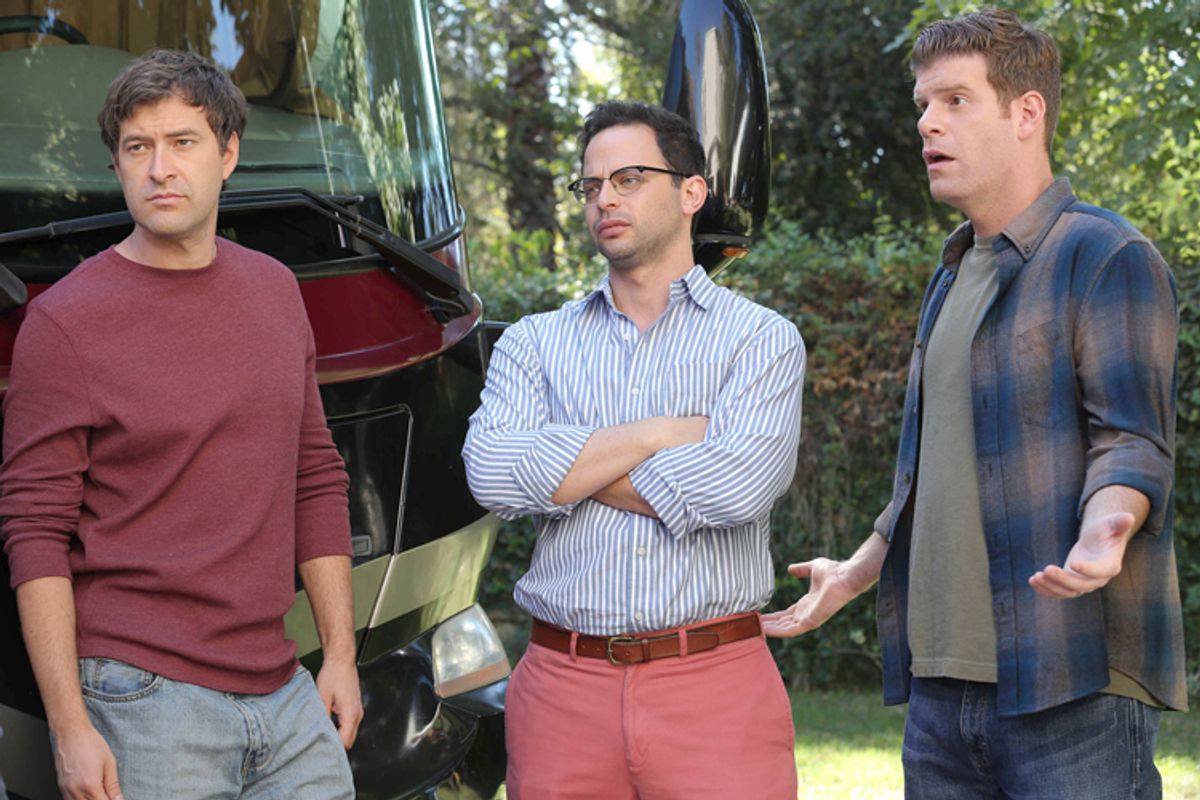 Football season is upon us, and Jeff and Jackie Schaffer, the husband-wife duo who created the sports-based comedy "The League," are celebrating the show's fifth season by moving to FX's upstart comedy network, FXX. The longevity of an improv-influenced show about a fantasy football league, which has already renewed for a sixth season, has surprised television critics and non-football fans alike. But much of the comedy comes not from football, but the antics of six close friends constantly in competition, played by comedians Paul Scheer, Nick Kroll, Stephen Rannazzisi, Jon Lajoie and actors Mark Duplass and Katie Aselton. The Schaffers recently talked to Salon about the show's unique writing process and season 5 (Warning: a few spoiler alerts ahead).

Improv and sports doesn’t sound like a recipe for a long-lasting television show -- but it’s made it for five seasons, the strength really being the bizarre characters. Can you talk about the writing process and how improv informs it?

Jackie Schaffer: The shows definitely are written the way Jeff has written for "Curb Your Enthusiasm" and "Seinfeld" before that. They’re really structured, outlined, and the characters are all really fleshed out. We basically created the whole show semi-autobiographically as football fans, loving fantasy football, and most of our friends that we find interesting or annoying or amazing. And in the process of doing that, we thought rather than having it feel like a script, sort of network, written to the letter, “Hey, don’t forget that comma or that letter or that inflection,” we wanted it to be looser so it felt more authentic. So that’s where that improvisational style came in, and we ended up hiring actors who had tons of improv experience, and some who didn’t have as much, and they’re all terrifically brilliant writers and performers in their own right.

Obviously the show gets written three or four times first in the writing stage, second on set, and third in editing. I think the difference is you don’t have an uptight network making sure that you stick to the script that 47 people signed off on, but rather an outline we’re all really excited about that has a lot of story, a lot of character, a lot of dialogue in it, but it’s a jumping-off point. If something better happens on set, hallelujah, great, let’s do that.

Jeff Schaffer: I think it’s that – the cast are all brilliant writers, and like Jackie’s saying, we work on a script and we put all these great lines in there, but every day we get on the set and these brilliant people are saying lines we haven't heard before, and we’re jumping in and they’re jumping in again and at the same time, we’re trying to figure out how to cover it with three cameras.

Every day of shooting is like trying to cover a live comedy sporting event, so that in a sense, directing-wise, sports and improv are very similar, because sometimes you don’t know where the next guy is coming from. You don’t know where the next hit is coming from. You have to be on a swivel. You have to be very nimble directing it, because our characters are so incredibly nimble performing it.

One of the criticisms of sitcoms is that they cater to the lowest common denominator, and their jokes are really flat. But that’s one thing that doesn’t happen with “The League” and shows like “Curb Your Enthusiasm.” Do you think that maybe this is a better model?

Jeff: Well, I dunno if it’s a better model. I do know most sitcoms are not very good. I remember when reality shows were taking over, and everyone was like, "Aren’t you mad about these reality shows? They’re killing the sitcom." I was like, "If they kill 'According to Jim,' I’m thrilled."

Our show is built to be funny. We want to make sure that everything in there is funny. We try and write funny things, they try to say funny things, and like Jackie was saying, FX gives us the room to do whatever we think is funny, and that’s a luxury network shows just don’t have.

But I also think, the thing that was important to us when we started the show, just to go back to when we started – we never thought it would go five years. We were just making a pilot, and we wanted to make a pilot that captured how a group of friends really talked, and we wanted it to feel real, like we were hanging out with these clever, witty, wicked people. And the best way to make it feel real was to have people speak in their own voices, so that’s the improv. So we wanted to make it feel real when we do it with the improv, but we don’t want it to feel like improv, and that’s the writing.

The show has been criticized for being sexist for its lack of really strong, unique female characters. What was your response to that, and is that something season 5 attempts to address?

Jackie: I have to be honest with you, I’m really surprised to hear that. I think Jenny [Aselton] is one of the most interesting female characters probably in comedy. I think she stands up and always has her own point of view, always, with the guys. I don’t think she’s token at all.

I think Janina Gavankar, who plays Shiva, has been a spectacular character we’ve had on, and everyone from Eliza Dushku to Jaima Mays to all of the people who’ve played the supporting roles, and even Brooklyn Decker last year – I thought, Brooklyn Decker did a spectacular job as the girl they were in love with in high school who tortured them. I thought she was really – I mean, obviously it wasn’t about being lovable, but certainly in terms of the balls-out, no-holds-barred original comedic female character, I think Brooklyn did a spectacular job.

I kinda don’t really think about what anybody says. I don’t really think the show is sexist. I think we try to make it feel authentic and – it’s what we’re writing about and it’s our point of view, so maybe the world or life is a little bit sexist, then I guess that’s where we’re coming from, but it’s certainly not filtered though a lens of being --

Jeff: I think we’re trying very hard to make sure our girls are as strong as our men. I think people come on the show and it’s like, if you’re a guest star you probably have a strange flaw. If you’re a lead on the show, you also have some strange quirks and you’re going to do some bad behavior, so just – male or female. We’re pretty much equal opportunity offenders, I think.

After five seasons of writing together, what do you do to keep the writing (and your marriage) fresh?

Jeff: We were running out of stories, so we decided to have a baby. Kevin [Rannazzisi] and Jenny’s new son, Chalupa Batman, is the same age as our daughter, so a lot of things that are happening to Chalupa Batman we’re certainly living through right now.

And that was actually insane – Jackie had the baby six hours before we started shooting season 4, the baby came early, so we were literally – we had this pre-shoot, we had every NFL player we were gonna have on the season almost ... We were setting up the whole NFL drafting, Tom Richardson, RG3, we had a quarterback from the Buffalo Bills, we had DeSean Jackson, a lot of these people coming in, they were all gonna be here on this one day. We thought the baby was gonna come in three weeks later, but the baby decided to come the night before this pre-shoot, which would be one day we could never move, because the players were only gonna be there then. The baby improvised her entrance.

Can you tell us who the NFL stars are this season?

Jeff: Yes. The season opens basically with a two-part – it’s an hour-long, two half-hours -- with Andre’s [Scheer] and Trixie’s [Mays] wedding. When last we left the gang, Andre and Trixie were engaged, even though Trixie is allergic to Andre’s sperm, but true love conquers all and they’re gonna get married. We’re gonna see their wedding is the most labor-intensive, user-unfriendly wedding on the planet, as they try to make it spectacular and pop. And in this, we’re gonna have NFL defensive player of the year from last year, JJ Watts, who is a giant man who’s actually very funny.

We also have Kevin and Jenny’s friend and nemesis Kristin Cavallari, who’s now Kristin Cutler, and last we saw her, Jenny had stolen Kristin Cavallari’s breast milk to avoid a breast-alyzer test from Kevin’s mom. Now, Kevin and Jenny’s kid Chalupa Batman and Kristin and Jay’s kid the Cutlet are going to be going to the same toddler program, so there’s a really fun episode in episode 3 with Jay and Kristin Cutler, and then as we go later in the season we’ve got a few more special NFL cameos coming up that we haven’t yet shot.

Jeff: Yeah it is. You know we’ve done a lot of crazy things on the show? It’s absolutely bonkers. Seth and Jason, for an entire half-hour, it’s crazy funny.

Have you tested that scene at all? What has been the reception to that?

Jeff: No, we just shot it. We just shot that whole episode. We’re editing this morning. It is a fever dream, a hilarious fever dream.