As the nation debates Syrian gas attacks, here's how to hash out America’s new, proper role in the world 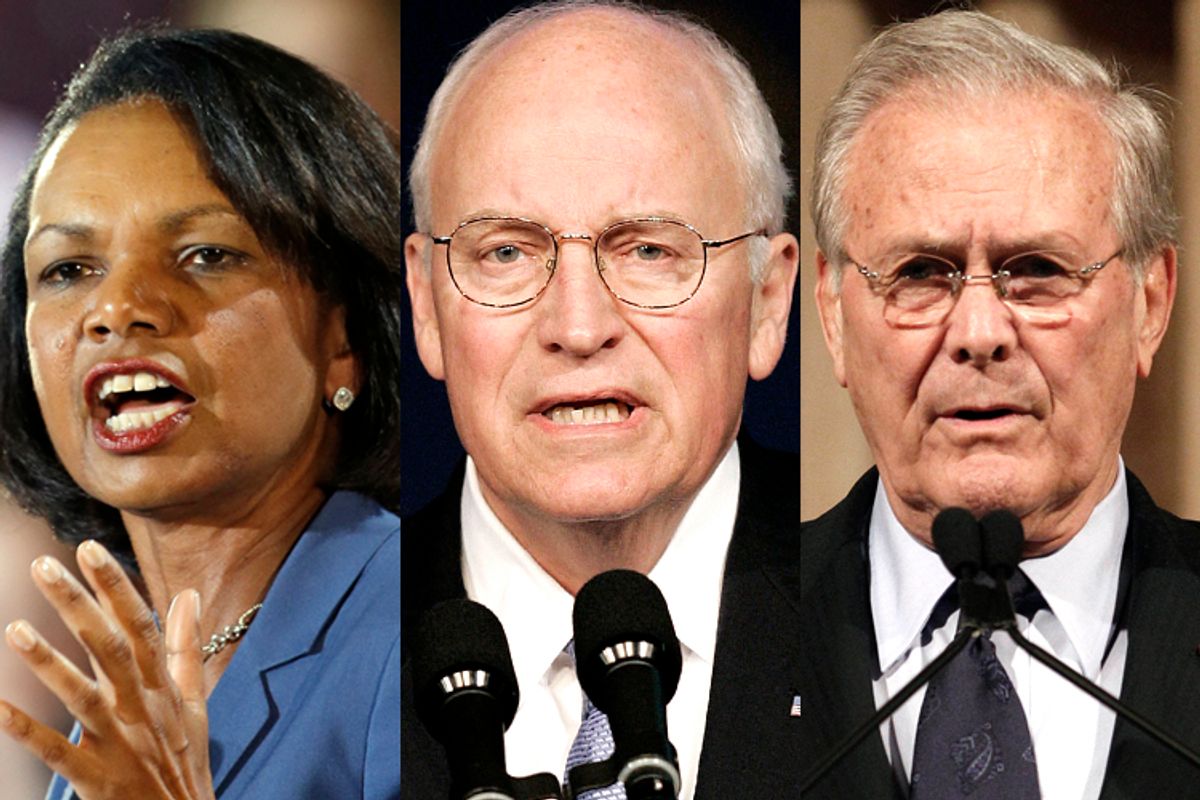 As the controversy over possible U.S. intervention in the Syrian civil war reminds us, we Americans often talk past each other when we debate U.S. foreign policy. In the words of the '60s saying, “The issue is not the issue.” Whatever the ostensible issue may be — in this case, the idea of punitive airstrikes to punish, but not topple, the Syrian regime — the heat and passion of foreign policy debates is usually explained by the existence of other, larger conflicts over American values and strategy in the world.

To be specific, there are three perennial debates in American foreign policy — over the legitimacy of military force, the rules of world order, and power politics. If you are a consistent thinker, then the position you take on these broad foreign policy issues tends to predict the position you will take in any particular controversy.

The legitimacy of military force. Views on when the U.S. can legitimately use military force to further foreign policy objectives can be ranged on a spectrum from pacifists to militarists. Pacifists believe that war as such is illegitimate. At the other end of the spectrum, militarists revel in war and believe it to be the chief purpose of the state and the highest form of human flourishing. Most Americans fall somewhere on the spectrum between the pacifist and militarist extremes.

As I pointed out in a 1999 Foreign Affairs essay, “Civil War by Other Means,” the attitudes of Americans toward the state’s use of military violence is heavily influenced by subcultural factors. The most enduring of these are regional subcultures. Americans in the regions shaped in the 19th century by the migration of descendants of New England Puritans, from New England to the Great Lakes to the West Coast, are much more likely to oppose foreign wars than white Southerners. No matter what war is being debated, opposition is likely to be concentrated in New England while support is strongest in the former Confederacy.

According to historians like David Hackett Fischer in Albion’s Seed and sociologists and anthropologists who have studied North-South differences, these regional attitudes toward war are embedded in regional attitudes toward violence in general. Southerners are more likely to support foreign wars and join the military; they are also more likely to kill each other over honor-related disputes.  Americans influenced by New England Yankee and Quaker cultures (who need not be white or Protestant themselves) are more inclined to seek peaceable resolutions than Southerners who inherit Cavalier traditions of aristocratic militarism or Scots-Irish pugnacity. These deep cultural divides make it difficult for Americans to separate debates about particular wars or interventions from their own deeply held feelings about war as such.

The rules of world order. Another set of debates about American foreign policy has to do with the rules of world order. Here the differences are much smaller. Few Americans supported the fascist ideal of the division of the world among militaristic slave empires, and communism never appealed to Americans outside of a small minority that dwindled over time as the repressive nature of Marxist-Leninist regimes became manifest.

The chief divide, when it comes to the rules of world order, separates elite Americans from working-class populists. Populists put much more emphasis on the self-determination of nations, including the U.S., when it comes to controlling adverse effects of trade and immigration, than do members of the foreign policy elite, who sometimes see themselves as “citizens of the world” first and Americans second. While most Americans believe in the right of other nations to throw off tyranny, according to consistent polls elite Americans are much more willing than the majority of their fellow citizens to spend American blood and American treasure to help them do so.

Power politics. The third set of debates about American foreign policy involves the relations of the U.S. and other great military powers to one another. There are four basic alternatives: spheres of influence, a balance of power, a concert of power and hegemony.

In a spheres of influence system, each great power dominates its own region and does not interfere in others (sorry, small countries). Most American isolationists, from Charles Lindbergh to Patrick Buchanan, have in fact wanted the U.S. to dominate the entire North American region but keep out of Europe, Asia and other regions.

In a concert of power system, two or more great powers collaborate to police a particular region of the world, the way that the NATO powers along with the U.S. seek to secure the peace of Europe.

In a balance of power system, hostile great powers seek to check and thwart each other. The world wars and the Cold War were balance-of-power struggles.

Finally, in a system based on hegemony, a single great power, the hegemon (from the Greek word for military leader) is so superior to the rest that it dominates the entire system. The entire world is its sphere of influence.

To condense the history of U.S. power politics into a single sentence, the U.S. pursued a sphere of influence policy in North America in the 19th century, a balance-of-power policy in the 20th century, and has pursued a policy of attempted global hegemony in the 21st century.

Three attempts at a U.S.-led global concert of powers, as an alternative to unilateral U.S. hegemony, failed, following World War I, World War II and the Cold War, respectively.  Woodrow Wilson’s League of Nations was doomed from the inception, because of the refusal to participate on the part of the U.S., already the greatest potential power in the world after World War I. The Cold War doomed Franklin Roosevelt’s hope that American-British-Soviet cooperation would survive World War II and provide muscle to the United Nations organization. Following the Cold War, brief hopes that the U.N. Security Council could function as a great-power concert were thwarted by continuing rivalries among China and Russia, on one side, and the U.S. and its allies Britain and France on the other, as well as between the U.S. and some of its Western allies in some cases, like the Iraq War.

Neoconservative dreams of creating a hard-edged, neo-imperial American hegemony over the world died in the rubble of Iraq and Afghanistan. The Obama administration, however, has not seriously sought to revive the concert-of-power alternative — an alternative that, on a global level, would require a high level of collaboration with China and Russia.

Instead, the Obama Doctrine can be described as “hegemony lite.” The U.S. will continue to seek military domination of all regions of the world, but will try to do so by methods less likely to arouse domestic political opposition — drone strikes and proxy wars, instead of “boots on the ground.”

Already the outlines of an emerging successor system to American global hegemony — even hegemony lite — are evident.

The determination of China to contest U.S. military hegemony in Asia has forced the U.S. to “pivot” toward a balance-of-power strategy toward China. The U.S. and China are engaged in an arms race, spying on each other and testing each other’s cyber-capabilities, backing different allies and thwarting each other in the Security Council. If we are not already in a Sino-American Cold War II, it is hard to imagine what would qualify for that term.

While a bipolar Sino-American balance of power may replace undisputed post-Cold War American hegemony in East Asia, the NATO alliance has taken on some characteristics of a concert of power, thanks to the Obama administration’s policy of “leading from behind” in coalitions like the one in Libya in which one or more European NATO powers like Britain or France take leading roles. (The refusal of the British parliament to authorize British participation in a war on Syria has weakened this strategy, but perhaps not permanently).

In short, the U.S. at the moment is, at the same time, the hegemon of North America, the orchestrator of an anti-Chinese balance of power in Asia, and leader of a concert of power both in Europe and in Europe’s Middle Eastern periphery, a region in which there are no true great powers, including Iran and Egypt and Israel. (If there were a genuine Middle Eastern great power, comparable even to a second-tier military power like Italy, the U.S. and its European allies might be deterred from their frequent Middle Eastern interventions).

As I noted above, the position an American takes in these three debates tends to determine that American’s position on particular foreign policy issues. If you are comfortable with U.S. uses of military force and support U.S. hegemony or a Euro-American concert of power in the Middle East, you may well be a liberal hawk or neoconservative interventionist, when it comes to the question of intervention in the Syrian civil war. If you view war as the last resort and think the U.S. should limits its foreign policy aims to its North American neighborhood, then you are likely to oppose any U.S. intervention in Syria — and almost everything else the U.S. does, outside of North America.

If you think that the U.S. and other great powers have a “responsibility to protect” the human rights of foreigners, as well as their own citizens, you will support more military interventions abroad than will your fellow Americans who don’t think that foreign nations have a right to call on Americans to overthrow their own tyrants, even though Americans would be glad to cheer them on from a distance.

“The issue is not the issue.” Bear that in mind, as you listen to debates about Syrian gas attacks or constitutional law. What is really at stake is not only the immediate subject of controversy, but also clashing — and ultimately irreconcilable — views on the part of Americans about America’s proper role in the world.