The comedian discusses his most iconic character with The Daily Beast 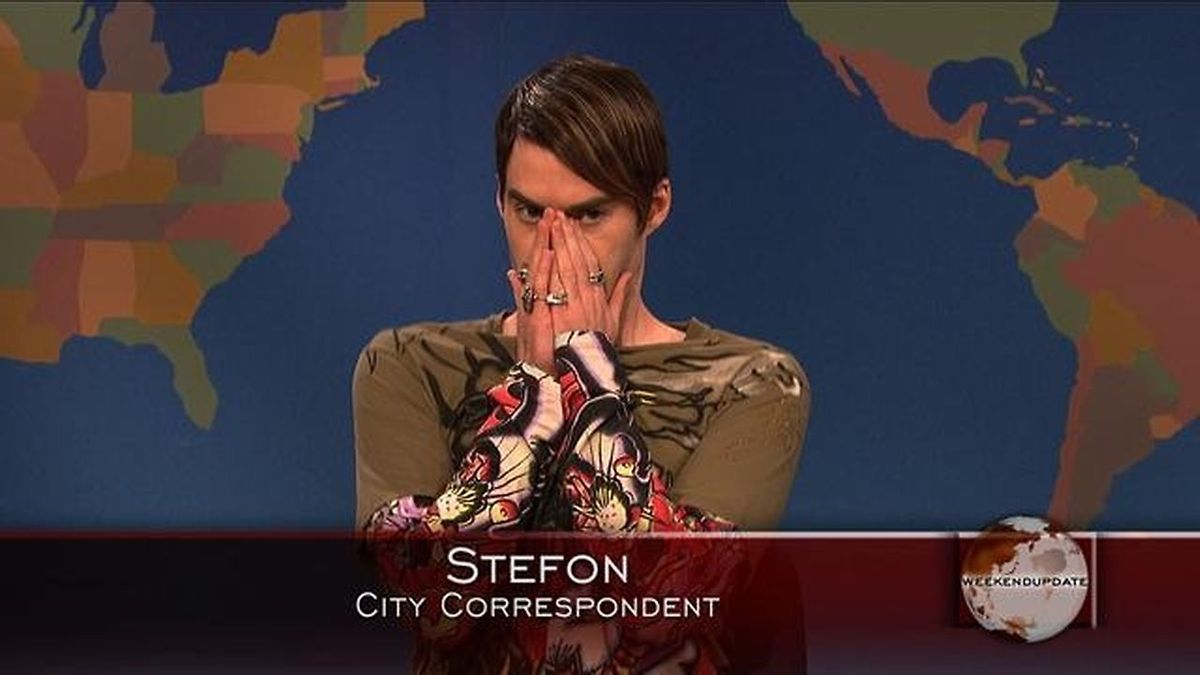 Bill Hader, an Emmy-nominated, former SNL cast member who recently exited the show after almost ten years, has never seen himself perform as his most iconic character, club-going enthusiast and "Weekend Update" City Correspondent Stefon. In an interview with The Daily Beast, Hader revealed that "I don’t watch [the sketches]."

"My wife does, and I’ll hear them in the other room," he said. "And I’m just like, can we just fast-forward, please?"

Hader also talked about why Stefon stifled laughter so much -- a result of an ongoing inside joke between him and SNL writer John Mulaney:

John Mulaney would change stuff on the cards right before we go live. Or he would tell me when we’re walking out, “Oh we changed the club promoter’s name to Gay Liota.” Always really simple things. Very rarely was it a whole joke—that happened maybe twice, where a whole one, two, three set up was new. Jewish Dracula, that was one that was a full joke that was new. Usually he’ll just change a detail, like when he wrote in that Spud Webb was at one of the clubs. He would just change a line or just even the wording of things and I knew why he thought that was funny, so I would start laughing at the idea of John finding it funny. It was super-inside jokes between John and I. It’s like a whole country watching John and I laugh at our sense of humor. Even members of the writing staff are like, “Why did you laugh at that?”

The Jewish Dracula named Sidney Applebaum made me laugh really hard not because that’s such a funny joke of that name, but that name is from one of our favorite jokes in the Woody Allen movie Love and Death, where a guy is talking about how history will mark his name, Sidney Applebaum, and it’s just the lamest name. It just made us laugh. So it was all very personal.

Although everyone seems to know a guy like Stefon, the character was an ironic choice for Hader, as the comic is "terrified" of clubs. "Yes, it is completely ironic that I play a character anything like that," he said. "But no one’s ever come to me and been like, 'Hey, do you want to go to this club?' They see me and are like, 'Oh, you look like a dad.'"

The one time he did go clubbing?: "I thought I was going to die. I stood in the corner like the kid at the end of 'The Blair Witch Project,' just terrified."

And now that Hader (and Stefon) is not on the show, he'll enjoy watching it, again:

"Now I’m going to be one of those dickheads who’s like, 'Oh, I like that sketch!' You always knew when someone fast-forwarded through one of your sketches on TiVo. Like, 'Oh I loved that sketch in the school where you wore a red shirt.' It’s like, 'Oh, you fast-forwarded through the sketch on TiVo, didn’t you?' Now I get to do that to them. 'Oh, Tarran, that was a great sketch. That one with you and Bobby. You were…piano players?'"