Celebrity moms make me feel better about myself

I read about their parenting foibles so I can feel like a better mom. But it's time to quit 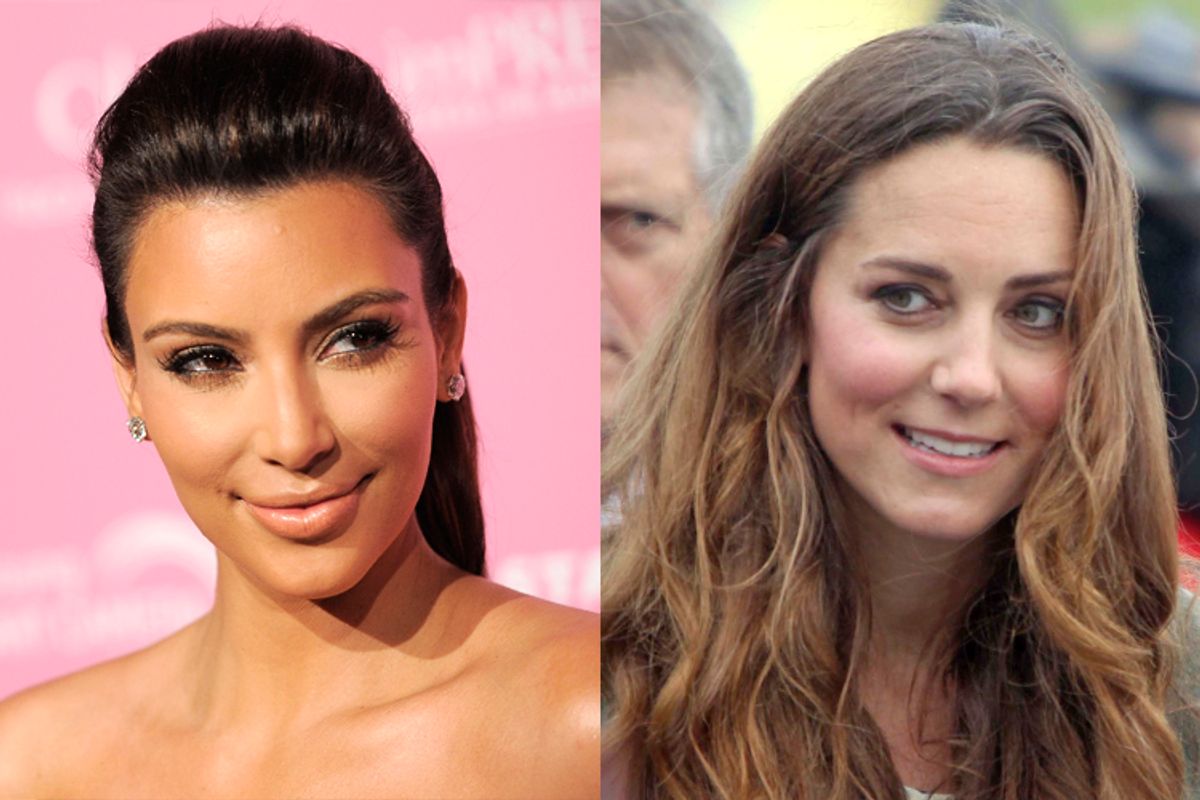 We live in an era of baby-bump obsession -- duh.

But following the much-hyped births of Prince George and North West, it’s still easy to feel a little postpartum depressed. If you’re like me, you want to cry about the way celebrity tabloids can make nine months feel like nine years. You feel intensely irritable that people don't know the difference between Miley Cyrus and Syria, but even the least interested among us can’t help knowing Prince George’s swaddle was aden + anais and Duchess Kate’s post-maternity dress was made by Jenny Packham.

I’m here to say that this hopeless feeling is normal. It’s OK to want to shake your remote the next time you flick past a roundtable discussion of Duchess Kate’s postnatal bump. You’re not the only one who wants to throw your iPhone at the wall when confronted with a headline about whether the future monarch will be circumcised.

If it’s any consolation, it will all be over soon. America, ever the narcissistic mother, prefers baby bumps to children and expectant mothers to full-fledged bum-and-nose-wiping ones.

Yes, culturally speaking, we are obsessed with the celebrity unborn. But our well-wishing turns to nitpicking minutes after a woman’s feet leave the stirrups and our (I mean her) little bundle assumes an identity of his or her own. So it’s T-minus 10, really, until Kate and the royal prince are subjected to the one-size-fits-all injunctions of the mommy wars.

If this sounds like an overstatement, let’s briefly revisit 2006 — a year that brought us the overexposed pregnancies of Angelina Jolie and Katie Holmes. Overly invested in their pregnancies, we American women obsessed about everything from their morphing midsections and the ways in which their miniatures would have the best of everything. Multiple nannies? Cribs of solid gold? Diapers lined with cashmere? These blessed babies were already more attractive and wealthier than we’d ever be — pre-approved for Amex black cards even in utero.

Now contrast that to these modern times, in which Angie faces scrutiny for letting Shiloh wear boys' clothes and Katie has taken heat for sexualizing Suri with high heels and preservative-filled phallic snacks.

Some might argue that technology — camera phones and celebrity blogs — have merely made these daily parenting struggles more visible. Still others might say, “Hey, this is America. We have a knock ’em down to build them up culture.” But it seems to me that we’d much rather treat these women like fantasized extensions of ourselves and we are only fascinated in them just as long as we can aggrandize or deflate them in order to assuage our egos.

At the moment, there’s much speculation as to the “kinds of mothers” our famous new mommas will be, with most concluding that Duchess Kate will be “working” and “hands on” while Kim Kardashian will be“fame-whoring” and “attention-conscious.” But these assumptions actually say more about our own collective self-image, don’t ya think?

It doesn’t take a board-licensed shrink to see that Kim brings us face to face with our misgivings about ourselves — the shame we feel about social media and self-exposure, about being a generation that tweets before we think. We celebrate Kate, on the one hand, because we’re reluctant to part with princess fantasies and, on the other, because with her high street fashions and former commoner status, we like to think she is “just like us.” In reality, both women are everything and nothing like us, and the way we relate to “them” depends entirely on whether we like what we see.

It’s tough work being an archetype. In these “Lean In” times, we search, across blogs and broadsheets, for an ideal mother (replete with perfect children in tow) to mirror our own identity as modern-day superwomen. But when these highly visible mothers disappoint us — by frumpy appearance, selfish work schedule, or some other “flaw”—it triggers our own shame and frustrations as parents. It reminds us of the perilous balancing act and suggests we really can’t have it all, do it all and be it all to everyone — at least not all at once, all the time.

When our celebrity mothers “fail,” we do too because we don’t recognize the boundaries between ourselves and them. In times when we’re depleted, exasperated, overextended and overwhelmed by the considerable demands of parenting, we relate to them as the fantasy maternal figures of our dreams. We don’t bond with them as real mothers, so much as we expect them to replicate or reflect on ourselves.

I say “we” because I’ve mommy bashed with the best of them. When Peaches Geldof dropped her baby but not her cellphone on the sidewalk, I laughed hard enough to risk postnatal incontinence — probably because, deep down, she made me feel better about my own tech addictions (hell, I was reading it in between spooning mashed banana into my baby’s mouth). I roll my eyes at any and all mention of Gwyneth Paltrow denying her children carbs because her super-wealthy (I mean healthy) lifestyle highlights a hilarious division of wealth that has at least as much to do with my own insecurities about my family’s nutrition versus my earning power.

What I’m saying is: I read about these women mostly so I can feel better about me, so I can be assured I’m bringing my kids up right or, at the very least, that I’m not screwing things up as epically as somebody else.

Given the current narcissism epidemic, that’s a little too self-serving for comfort.  And so in this time of historic and much-hyped bay-beeeees, I am swearing off sneaking peeks into celebrity prams.  I’m off to find a more realistic self-image and a better way to neutralize my maternal guilt.

As long as we depend on other women for self-esteem, using them as bad examples or fantasy versions -- special, powerful -- of ourselves, they remain stuck in a narcissistic version of themselves too.  Why is Kris Jenner a powerhouse?  Because some part of us confuses fame and infamy too.  If she really bothered us half as much as we claim she does, we’d look away and stop feeding her empire.  (Remember: There’s little a narcissist hates more than being ignored.)

Alternatively, we can lean in and look closer, especially if we find ourselves feeling too passionately about the Demi Moores and Victoria Beckhams and Farrah Abrahams of the world.  What we might find is a road map to our own fears, self-doubts and dissatisfactions -- a call to, respectively, put away childish habits, find our life’s purpose or reexamine our sex lives. Once we’ve felt and dealt with those voids it’s easier to empathize in a real way with other mothers, even the ones in front of us in the supermarket checkout line (not the other women unloading grocery carts, but the ones staring back at us from the tabloids).

Koren Zailckas is an internationally bestselling writer, and has contributed to The Guardian, U.S. News & World Report, Glamour, Jane, and Seventeen magazine. She currently lives with her family in the Catskills mountains of New York. "Mother, Mother" (Crown, on-sale September 17, 2013) is her first novel.