I was shocked when I saw her nipple. The next months taught me I wasn't in charge of her body -- or my own 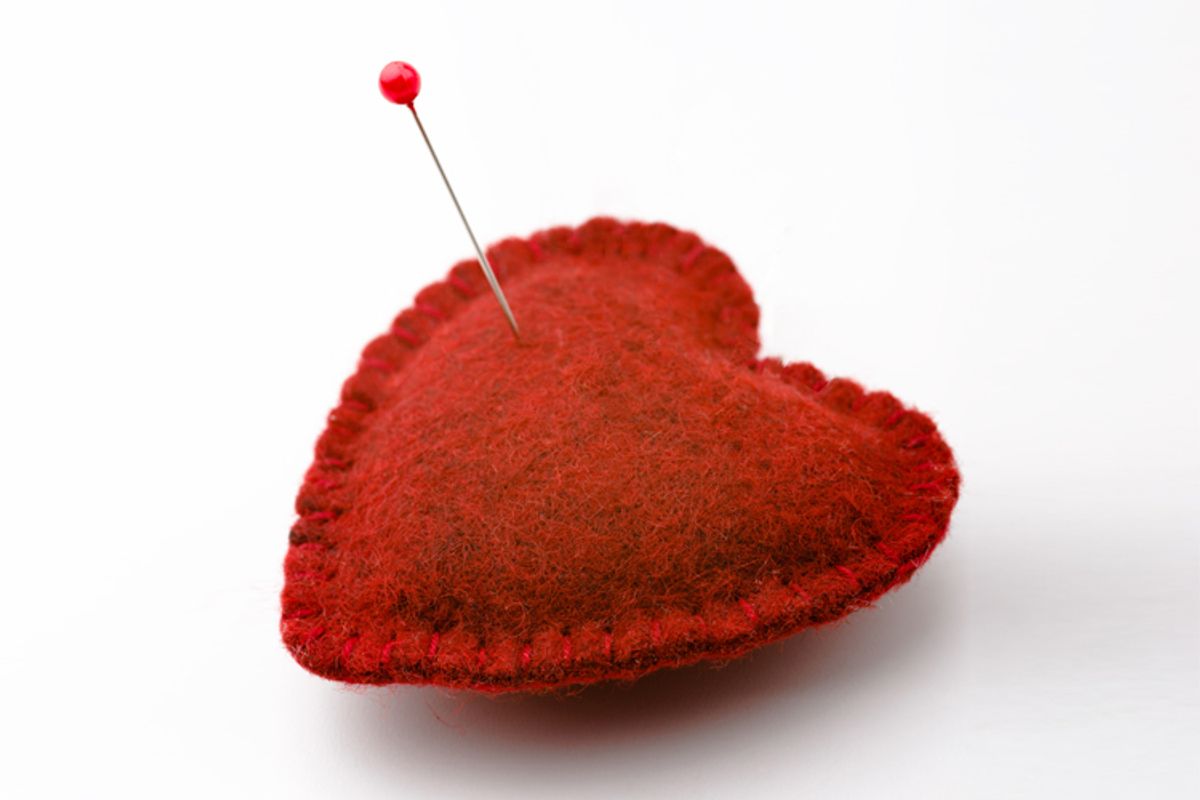 A couple of months before I received a breast cancer diagnosis, before I was forced to accept in the deepest possible way that I am not in charge, my daughter came home on college break and showed me in her way that I am not the boss.

The morning was chilly, and I’d decided to bring her coffee. I stood by her bed in the weak winter sunlight, coffee mug in hand. She opened her eyes and smiled. She’s always been a cheerful riser (aside from a brief period of my unhappiness when her hair was pink and she was pocket-calling me from the beer line at a keg party). As she propped herself up on her elbow, her nightgown, a spring green acetate shift she’d bought at a flea market, the kind of sleepwear pediatricians advise new parents to never, ever let a baby sleep in due to fire safety, slid from her shoulder revealing … a pierced nipple.

I might have had an irrational reaction. I withheld the coffee. “You pierced your nipple?”

She yanked up the nightgown.

“You pierced your nipple!?!” Thus began my apoplectic rant. In a voice spiraling ever upward I wondered did she know she might never be able to nurse her babies? Did she know what kind of message she might be sending to her intimate partner?

I ran down the stairs, yelling out to my husband, “She’s pierced her nipple!”

He trudged in. Uncertainty, shock and discouragement scrolled across his face. He was neither upset nor happy with our daughter’s choice, he was responding to my reaction.  “What am I supposed to do with that information?”

I ran back upstairs. My daughter calmly told me that she’d used her own money, and it was her body. I cried out, “Flagrant fucking foul!” As long as we were paying her tuition, as far as we were concerned (and I may have been using the royal we at this point, as my husband was already over it), no money was truly “hers.” Moreover, until she was old enough to rent a car, 25, the age of full prefrontal cortex development, her body was only on loan to her. I may have gone a little crazy. I told her that her breast, with the silver spear through it, looked like a canapé at a cannibal cocktail party.  I might have yelled this.

“You’re insane,” she said with excruciating calm as she closed her bedroom door and went back to bed.

Was I insane? Why had this piercing upset me so much?  She hadn’t pierced her face again (her nose is pierced, and I think it looks great). Her ears are pierced. My ears are pierced, multiple times -- well, twice in each ear.  But her nipple? Wikipedia says many things about nipple piercing, but the two I glommed onto were “deaths have occurred” and “sexual arousal is enhanced.” There you have it: sex and death. I wasn’t irrational enough to believe she might die from this, but my extreme reaction probably had to do with the fact that her piercing put me face to face with her sexuality, which can be hard for parents. I have friends who plug their ears and chant hummana, hummana, hummana whenever teens and sex are linked in a sentence. Not a healthy reaction, to be sure, but an honest one. Face it: Sexual activity has psychic and physical ramifications. We cannot follow our children down that baggage-strewn, pothole-ridden, highway. Sure, sure, we can talk about condoms and STDs and emotional impact, but really, at some point we have to let go.

I saw my daughter’s piercing as an act of violence against her breast. Against all breasts. Breasts, for me, represent femininity, a soft sexuality, womanhood, motherhood. I remember how this cherished child of mine once nursed. How she would completely relax, her blue eyes staring up at me until they rolled back as she drifted off to sweet sleep.

There is also power in breasts, but you don’t have to spear your nipple to claim that power. How could she not see that?  Maybe what I was really upset about was the possibility that I didn’t know my girl and her belief system. Not in the angry, lashing out, I don’t even know you way, but in the potentially heartbreaking, how could we have grown so far apart way.

The next day, we took a walk. I asked her why she’d done it. She rolled her eyes. I thought that if she had a strong reason — an homage to Robert Mapplethorpe, a take back the breast political statement, an interest in aboriginal body art — I might be able to accept the barbell bisecting her nipple.

Here’s what she said.  “I’ve wanted to for a long time.  It is more interesting than a belly button piercing. I don’t know.”

Here’s what I said. “You are 19. Your breasts are at their peak. The last thing they need is enhancement.”

Here’s what she said. “I’m walking home if you keep talking.”

What had I done to my body on a lark as a young woman?  I’d spritzed on far too much Super-Sun-In, turning my brown hair a shocking orange. I endured a frizzled perm. I quit shaving my legs. I once plucked my eyebrows nearly to extinction, leaving a terrible arched tightrope over each eye.  My mother’s garbled outburst was half-laugh and half-gasp,  “What the hell were you thinking?” A good friend of hers, who happened to be in the room with us, said, “They look terrific, honey.” They didn’t look terrific, but I appreciated the compliment.

Could I bring myself to tell my daughter her nipple looked terrific? For a nanosecond I searched within and came to, no. To me, it looked barbaric. But, guess what, she didn’t pierce for my approval. I tried to calm down, and recognize that her choice to pierce isn’t a character flaw. I tried to accept that she’ll be making many choices that don’t involve me. I tried to be quiet and give her a hug. I love her.

And then came my diagnosis with breast cancer and the piercing issue became, well, huge.  On top of everything else I believed about breasts, turns out they have the potential to kill you. I was suddenly facing a bilateral mastectomy and then enduring the reconstruction, which would involve expanders, giant syringes and a second surgery. An experience I would wish on absolutely no one.

The next time my daughter came home from college and I saw through her T-shirt the outline of her piercing, I took it as a full body slam, as if she had betrayed me and pierced my very heart. Why would she choose to mutilate (my word, not hers) her breast? I begged her to take it out, in solidarity with my struggle. Her piercing became a line of demarcation between us. I’m not saying I was rational, or that cancer-free breasts are too sacred for piercings, but I just felt … insulted.  The piercing felt cavalier.

My relationship with my own breasts was now far more complicated than before my surgery. After having babies and nursing I preferred that they not be touched, so in losing them I was not losing a giant part of my sexuality. I was lucky to have nipple sparing surgery and a great surgeon. Aside from scars, they look pretty good. The weird results are my feelings of detachment toward my body parts, numbness across my chest and down one arm, as well as the fact that my nipples don’t respond to heat or cold. Basically they’re like two pink pencil erasers attached to my body. When I complained to my plastic surgeon that I felt like a Victoria’s Secret mannequin with my semi-erect nipples, he said, “Isn’t that the last thing you’d expect to say after a bilateral mastectomy?”

Ouch. And though callous, of course he’s right. But I do miss sensations, the jostling when I run, the tightening across my chest, the softening in the tub.

My daughter claimed that her piercing was a metaphor, which piqued my interest. I love metaphors. But she refused to tell me what it meant. I pondered what a bilateral mastectomy could be a metaphor for. Giving up the very part of my body that once nourished my children in order to beat back a disease and live my life? In order to claim my life, my body, as my own terrain, I had to sacrifice part of it, change its borders. My breasts are gone, and I miss them. When I sleep on my stomach at night, I feel a hardness, an inflexibility beneath me.  I don’t want to hide my heart beneath a shield.

Ultimately, my daughter took out the piercing during her visit. And I felt better, though I don’t think she did. I think she felt as if she were visiting a police state. If her piercing was a way to claim her body as her own territory, then I was a Viking laying my opinions and values on her. (She also cut off her beautiful long hair in an authentic and generous act of solidarity with bald me.)

Writing this all down, I feel silly about my extreme reaction, and I’m still asking myself why the piercing bothers me so.  I spoke with an editor at a badass literary website about this issue, and she suggested I was provincial and should interrogate my prejudices. She said that feigning acceptance of the piercing was a milquetoast response. Yet with our adult children we have to at least halfway accept things, because like I said at the beginning, we are not the boss anymore. Not of our children’s lives and sometimes not even our own. My daughter left home without her piercing. Whether or not she put it back, I don’t know. I don’t want to know, and it doesn’t really matter.  I want to be open and honor my girl’s choices.

In the months after my surgery, I thought I should do something bold, to reclaim my body from the cancer scare, similar to planting a flag on the moon. Of course now that I have no sensation in my breasts a pierced nipple seems the perfect gesture, right? Much as I like the irony, I can’t do it. Maybe I’ll settle for a tattoo. A giant heart.

Natalie Serber is the author of the story collection, "Shout Her Lovely Name," a New York Times Notable Book of 2012.  She is currently working on a novel.  Find out more at www.natalieserber.com.