He's been violent, homophobic and nasty. Now he has an MSNBC show. Why does the left want him in the limelight? 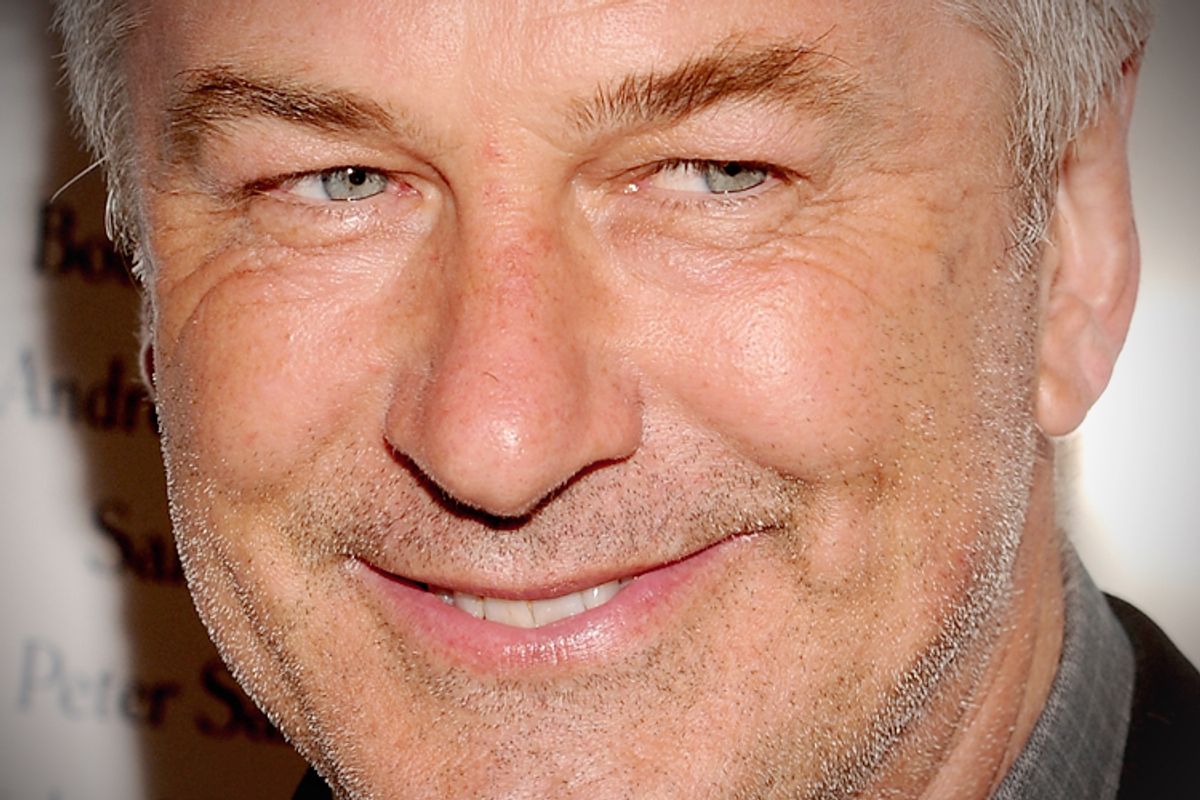 MSNBC announced today that the actor and WNYC host Alec Baldwin will host a Friday-night talk show, "Up Late w/Alec Baldwin," on the news network; the show will concern itself with culture and with current events.

It's the latest act in a career marked by constant reinvention, from hunky action star to Stanley Kowalski to daddish comedy icon -- running up against a propensity for self-destruction that would test the patience of the public, were it undertaken by a star any less cosmopolitan or cuddly.

Why is it that Baldwin, perpetually in the conversation around New York City municipal races (if inserted there by himself or family members), is able to entirely transcend a violent, misogynist, gay-baiting reputation, when other stars can't manage it? And why is it that liberals -- those folks who theoretically ought to be most concerned with combating hurtful language -- are most enthralled by the star?

Baldwin checks all the right boxes for a particular sort of East Coast liberal; he supports the New York Philharmonic and has appeared in the erudite, sharp "30 Rock" and the last two films by Woody Allen. He does much more that counters that image, having been forced, this summer, to apologize for referring to a Daily Mail reporter as a "toxic little queen" and threatening him physical harm. He posed in a magazine photo shoot implying sex with female flight attendants some months after he disrupted and was ejected from an American Airlines flight. He blamed a flight attendant -- "this woman, who had decided to make some example of me" -- while the airline stated Baldwin called the flight crew "inappropriate names."

No one but Baldwin and his ex-wife Kim Basinger know what has happened between them, but their media battle over the fate of their daughter has been epic -- and Baldwin once famously called that daughter a particularly cruel name. Among many violent or abusive altercations with paparazzi, Baldwin has called black photographers not named Ralston or Rodney "Ralston, the ex-crackhead" and, allegedly, "Rodney"; a black photographer claimed Baldwin used a vulgar racial epithet to describe him, while a female gossip reporter claimed he told her to "choke to death." Baldwin had another physical fight with a paparazzo just last month!

Stars have overcome far worse; Tiger Woods is still playing golf, and someone out there is willing to write checks to Charlie Sheen. Mel Gibson may never be fully rehabilitated, but he'll always get work in offbeat action franchises. Each has been conditionally forgiven for a particular set of reasons. But none of the stars whose particular alpha-male aggression has vented itself in the public eye has been clutched so tightly to the liberal bosom as is Baldwin, who's now employed by the news network that has become a standard-bearer for American liberalism. If an actor any less able to smooth over the tensions he himself creates -- an actor who looks less dapper in a suit, one whose stated interests were carousing rather than a night of Handel -- were in Baldwin's position, his anger and his propensity to take out that anger on gay men, black men and women might not be so easy to ignore.

Further, what even are Baldwin's politics, and how does he express them? We know he desires public office for himself, but has never been challenged to assemble a platform; we know that between Twitter deletions he vociferously endorsed President Obama, through a condemnation of his opponent. He's been involved with attention-getting animal-rights organization PETA for years. As with his equally outspoken conservative "30 Rock" character, Jack Donaghy, Baldwin tends to win arguments with volume, not nuance. His rant on "The Late Show With Conan O'Brien" during the impeachment of Bill Clinton, about how liberals ought to kill Henry Hyde, has been studiously forgotten by liberals but lives on in the conservative blogosphere. Baldwin's aggression is tangential to his art -- a good liberal can be impressed by his subdued turn in "Blue Jasmine" -- but is central to his politics.

And now he'll be sharing air with nuanced thinkers like Chris Hayes and Melissa Harris-Perry. Unlike the intellectual hosts across a network whose post-election ratings travails were recently documented by the New Yorker, Baldwin riles up the blood. He's closer to Bill O'Reilly, in rhetorical style, than any liberal on MSNBC, and perhaps his perpetually reappearing to boisterously express himself is what keeps liberals forgiving him. It's what makes him as appealing a potential cable-news-network host as the brash, occasionally offensive Rosie O'Donnell, whose volubility reportedly torpedoed her potential show, was in years past.

Baldwin has an odd self-preservation that is continually overridden by market forces. The fact he hasn't been able to do what he knows is best has allowed his career to flourish; Baldwin asked NBC to release him from his contract with "30 Rock" after the scandal over his leaked voice mail to his daughter during the show's first season. His request was not granted. He wanted to quit the show again after the fifth season, noting, "because I'm an employee, I don't have any say." After saying he wanted the show to keep running with him on it, he changed his tune and recently said he wanted to quit acting altogether, and though "Up Late" won't be acting, exactly, it seems like a big risk to give a talk-show franchise to a man who can't keep a Twitter account. The stakes at MSNBC are far higher than on public radio. Baldwin's instinct is to flee the public that can't stop praising him. Wouldn't it be better -- humanitarian, even -- to grant him that wish?