John Kerry is blowing it on Syria

As the antiwar hero and diplomat sells the country on a Syrian strike, he’s bowing to hawks and forgetting history 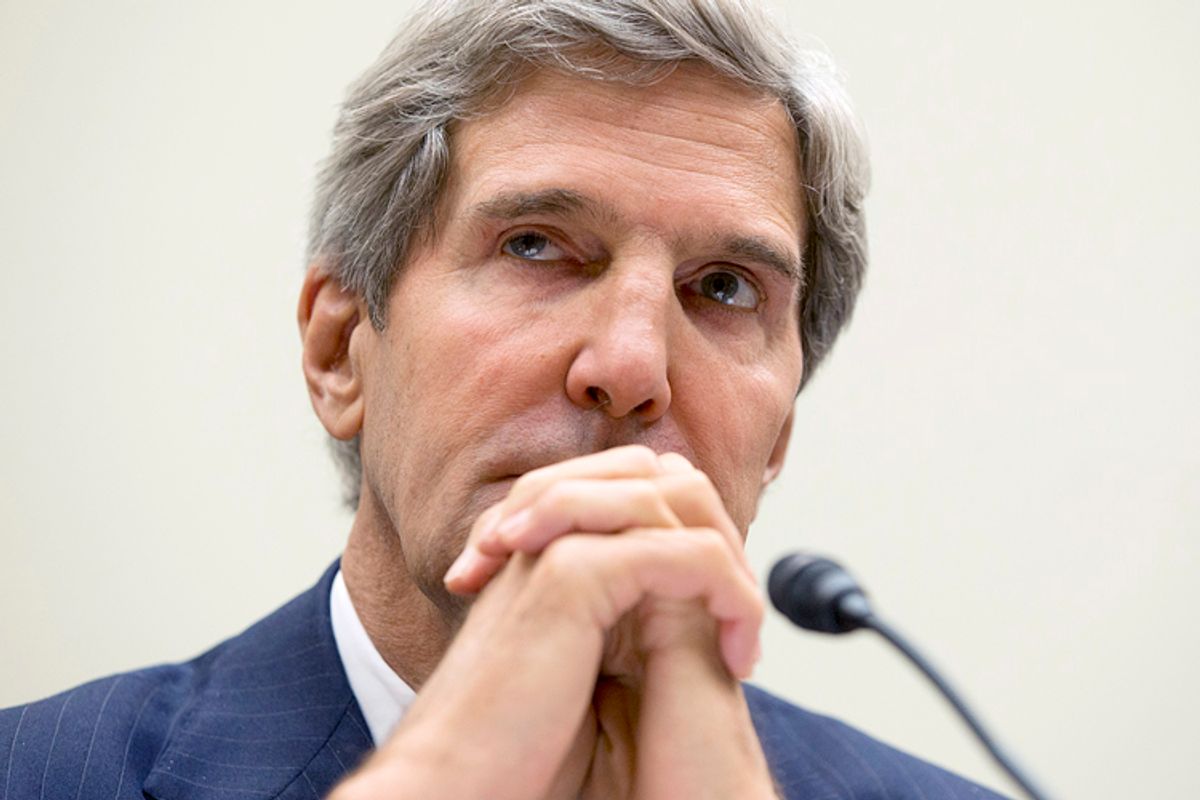 Secretary of State John Kerry should have been the Obama administration’s best weapon – next to, perhaps, the president himself – in rallying the country and Congress behind the need to strike Syria over the Assad regime’s use of chemical weapons. With the Democratic Party’s liberal wing so crucial to the president’s winning the looming congressional vote, in which some Republicans will oppose Obama simply because he’s, well, Obama, this should be Kerry’s moment.

The man whose political career was shaped by his opposition to the Vietnam War, who famously asked Congress, “How do you ask a man to be the last man to die for a mistake?” is now the nation’s top diplomat, the face of the genial, persuasive side of U.S. global power. Significantly, he’s also become the public face of the campaign to use military force against Syria, and he’s putting his antiwar credibility solidly on the line, fighting to win over liberals in Congress and beyond, even having a special sit-down with Syria-strike skeptic Chris Hayes on MSNBC Thursday night to declare, “We are not going to war!”

But so far, Kerry is blowing it. His rhetoric has been shrill and off-putting, from the second he called a failure to strike Bashar al-Assad a “Munich moment,” histrionically invoking British Prime Minister Neville Chamberlain’s 1938 "peace in our time" summit with Adolf Hitler (which, according to Godwin’s Law, means Kerry has already lost).

While Kerry is well-equipped politically to reach out to the president’s progressive constituency, as the man who challenged George W. Bush’s cynical war presidency in 2004, he has seemed more mindful of another constituency: hawkish Senate colleagues like John McCain and Lindsey Graham, who (it should be remembered) welcomed his appointment as secretary of state even as they blocked Susan Rice and tried to veto Chuck Hagel as Secretary of Defense.

To be fair to Kerry, the policy he is peddling is so exquisitely poised as to be untenable: a military strike that’s effective enough to deter Assad from using chemical weapons again, but not enough to tip the balance of power to the rebels. It’s the military equivalent of a unicorn, and nobody seems to believe in it. That is on the president. But Obama’s cause isn’t helped by the fact that Kerry himself tips the balance to satisfy whoever he’s talking to -- and most disastrously, when he’s talking to hawks. In the end, he and the White House apparently acceded to McCain’s pushing a resolution that backs efforts to “change the momentum on the battlefield” – and that’s a disaster for the U.S.

In the Senate Foreign Relations Committee hearing, Kerry either humored or endorsed McCain’s insistence that a U.S. military strike must strive to destabilize Assad and tip the balance of power to the rebels, who McCain described as on balance “moderate” and “secular.” The Arizona senator approvingly quoted a long passage from a garbled Wall Street Journal Op-Ed by Elizabeth O’Bagy, who the paper failed to identify as the political director of the pro-strike Syrian Emergency Task Force, which argued that the Free Syrian Army consists of secular heroes who “will pave the way for a flourishing civil society." When McCain asked Kerry if he agreed with O’Bagy’s assessment, Kerry, fatefully, answered:

I agree with most of that. They have changed significantly. They have improved, and as I said earlier, the fundamentals of Syria are secular, and I believe, will stay that way.

“I believe we do, for the most part,” Kerry answered.

“For the most part” isn’t good enough. The New York Times didn’t help Kerry’s case by publishing a story Thursday that was illustrated by a gruesome photo of a Syrian rebel/warlord as he was about to execute terrified men loyal to Assad. The rebels certainly seemed like the bad guys (late Thursday the Times revealed that the photo was taken in 2012, so it may cast less light on the current state of the opposition than it seemed that morning). Also on Thursday Reuters published a less inflammatory yet still sobering rejoinder to Kerry’s insistence, at Tuesday’s hearing, that the rebel alliance “has increasingly become more defined by its moderation, more defined by the breadth of its membership, and more defined by its adherence to some, you know, democratic process and to an all-inclusive, minority-protecting constitution.”

In fact, the Reuters piece – “Kerry portrait of Syria rebels at odds with intelligence reports” – says that U.S. and foreign intelligence sources and other Syria experts insist that “Islamic extremists remain by far the fiercest and best-organized rebel elements.” By the way, Reuters does that cool, journalism-nerdy thing where they tell you who the editor of the piece was, and it was Warren Strobel, famous, with Jonathan Landay, as part of the McClatchy team that virtually alone among big news organizations got Iraq right. If I have to choose between Warren Strobel and Elizabeth O’Bagy, it’s a slam dunk.

Just as troubling as Kerry’s uncritical embrace of McCain’s “secular Syrian rebels” was his more honest but still disturbing admission of the worst of everyone’s fears: a “limited, tailored” strike could still lead to an expanded American involvement in Syria, including “boots on the ground.” Here’s the exact quote:

In the event Syria imploded, for instance, or in the event there was a threat of a chemical weapons cache falling into the hands of al-Nusra or someone else and it was clearly in the interest of our allies and all of us, the British, the French and others, to prevent those weapons of mass destruction falling into the hands of the worst elements, I don’t want to take off the table an option that might or might not be available to a president of the United States to secure our country.

Fair enough. Maybe even admirably honest. As Ezra Klein notes, it’s the very definition of a “gaffe” as defined by Michael Kinsley: when a politician accidentally tells an inconvenient truth. Kerry also warned at Tuesday’s hearing that if a U.S. strike provokes another Assad chemical attack, “he will invite something far worse and I believe something absolutely unsustainable for him.” I ask with Greg Sargent: What does that even mean?

Sargent has been arguing, persuasively, that alleged “whip counts” of Democrats that look bad for the president are premature, because it’s easy as well as smart (politically and otherwise) to profess skepticism about a military strike, even if you’re open to being convinced. In fact, that describes me. So it’s wrong to assume Obama’s in trouble in Congress. But at this point, anyway, he should be.

Earlier in the week I asked whether Republicans could resist making Obama the issue in this debate, and I’ve been mostly impressed by the extent to which divisions on a Syria strike have been about its merits, not about the man who’s ordering it. Of course there are outliers: Rick Santorum was for a Syria strike before he was against it; Liz Cheney’s just silly. But both McCain on the hawkish side and Sen. Rand Paul opposing intervention are representing what they believe, and that’s sadly refreshing in a Congress gridlocked mainly because of GOP hatred of the president.

On the other side, all eyes are (unfairly) on the Congressional Black Caucus, which has often been the conscience of the country and whose many members are agonizing over this vote, as a majority seem to be leaning against it. Sadly, CBC chair Marcia Fudge has asked members to "limit public comment until [they] receive additional details," reportedly in a special briefing by National Security Advisor Susan Rice, spokeswoman Ayofemi Kirby told Foreign Policy's "The Cable." Still, I was thrilled to see Rep. Barbara Lee, the only person who voted against the authorization of the war in Afghanistan, and who is pretty reliably a no on this resolution, tell Chris Matthews, “I’m not just speaking for the Congressional Black Caucus.” It’s wrong to pit the CBC against our first black president when so many progressives have the same reservations. But it's clear CBC members remain a tough sell for Obama and Kerry.

Barack Obama inherited our post-9/11 American psyche and political consensus from George W. Bush. He said he would have voted against the Iraq war, but we can’t know the truth; it was an easy call from the safety of a liberal Chicago-based state Senate seat. Obama became president vowing to undo the excesses of the Bush years, and end the war in Iraq, and he did some of what he promised. But he has mostly lived the presidency as he found it. John Kerry, who voted to authorize the use of military force (but kind of fudged that in his interview with Hayes) later said he regretted it. He may regret this campaign too.

Rand Paul has already turned Kerry’s most famous line against the secretary of state, snarking last week: “How do you ask a man to be the first man to die for a mistake?” That’s a typical Paul cheap shot, from the guy who isn’t afraid to trash Abraham Lincoln as a tyrannical racist hypocrite. But the risks to Kerry are real. He’s trying to be the man who wins liberals, and the country, over to a military intervention they recoil from. He could become the Democratic Colin Powell, a war hero turned secretary of state, selling Americans on a new debilitating conflict, tragic and ultimately undermined by the battles ahead.