Americans don't really want war. Lots of the people they send to Washington do 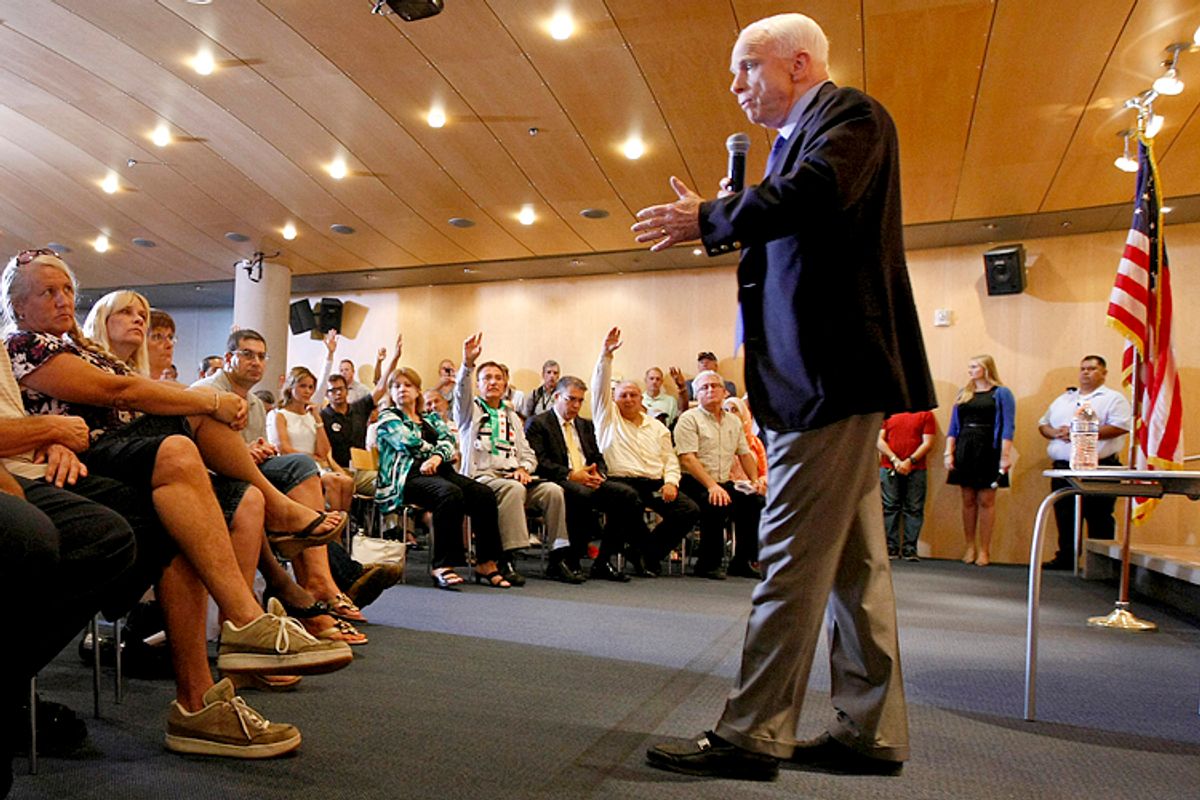 John McCain got an earful at a recent town hall, because whenever John McCain actually shows up in his state people generally feel like yelling at him, but this time the angry Arizonans had a good point: Americans and Arizonans don't particularly want to go to war in Syria, so why are so many people in the Senate about to vote to do that? And why did John McCain basically already vote to do this?

McCain was heckled and aggressively questioned at the Phoenix meeting. One man used marshmallows as a prop but most questioners had pretty straightforward arguments, like "we do not want another engagement in the Middle East." John McCain promised that this would not be a real war, meaning a war in which Americans would be in any danger of dying in large numbers, but rather just the sort of minor, small-scale military action that will probably just kill a lot of Syrians. This did not seem to satisfy his critics. One of them had a particularly pointed, but sort of misdirected message:

"We didn't send you to make war for us. We sent you to stop the war," one man said to applause.

My question is this: Why would you send John McCain anywhere to stop a war? Anywhere besides "retirement," I mean? Arizonans have been sending McCain to Washington (well, they haven't been sending him there -- he lives there -- but they have been asking him to represent them in Congress) for a quarter-century now, or longer if you count his time in the House. In that time he hasn't been consistent on much, but one thing he's always been steadfastly in favor of is war. He's never heard of a proposed military intervention he didn't immediately support, or not support mainly because it wasn't a big enough military intervention.

Some Republicans pull a bait-and-switch of sorts, as when George W. Bush campaigned against Clinton-style foreign interventions and then started a couple of horrible, endless wars, but you know what you're getting with a guy like John McCain, a man who sings fun songs about the countries he wants to bomb. Mother Jones made a map of the countries John McCain has wanted to bomb or invade over the last 20 years. There's a lot of them!

You can count on some Republicans to be purely opportunistic opponents of military invention -- this president favors it, so now I am opposed -- but that is never going to be the case with John McCain. If military action is on the table, John McCain is going to rattle a saber all over that table. If you're tired of war, Arizona, just don't vote John McCain anymore. (This also goes for Californians who dislike war and massive government surveillance programs but keep voting for Dianne Feinstein.)

McCain does not really care about the will of the people. He considers that political bravery. But his halfhearted attempt to sway these people -- and his insistence that he's going to take his constituents' opinions into consideration on an issue that he has already voted on -- is the current Washington debate in miniature. No one wants this, except most of the important people.

The people at McCain's town hall were not peacenik outliers. The majority of Americans are opposed to airstrikes in Syria. (Democrats oppose them more strongly than Republicans do, so thus far "liberal hypocrisy" on the issue is primarily limited to elected officials, as ever.) If President Obama loses a congressional vote and then doesn't strike Syria, well, that might actually be a pretty politically popular move. But it would lead to John McCain and a chorus of Washington pundits calling him "weak." Doing your best to reflect the will of the people, as represented either by polls or by the votes of popularly elected representatives, is always considered "weaker" than just doing hugely unpopular stuff because a couple of rich guys want you to.

One interesting thing I learned in this latest Pew poll: Americans have largely figured out one of the most pressing lessons of our entire post-World War II history of war-making. Seventy-four percent of people polled said airstrikes in Syria would be likely to "create a backlash against the US and its allies in the region." This seems like a pretty obvious point, but it's a point that has eluded most of the American foreign policy "establishment" for ... 50 years now? People don't like us in large part because we keep bombing them and overthrowing their governments -- sometimes their democratically elected governments -- and more bombs might not be the best way to win them over.

McCain, and neocons, and sundry American foreign policy "experts," usually only ever imagine that citizens of foreign lands will grow to hate the United States if we don't drop bombs or send in troops somewhere. (You know: We have to actively support a rebellion in Iran, because they love it when we involve ourselves in their affairs, and they understand that we always do so altruistically and with the best interests of the people of Iran in mind.) The "we have to do something" refrain will always be an easy way to Sound Serious on Sunday Shows.

Right now popular opposition to strikes on Syria, based on a reasonable interpretation of recent history, is meeting Republican resistance to everything Obama wants, and the result could be an actual defeat for the hawks (and the reluctant liberal humanitarian internationalist interventionists or whatever we call those ones). The actual leadership of both parties, from Obama to Boehner, officially supports action, popular opinion be damned. The votes, though, may not be there.

Based on the most recent whip counts, we may soon see one of the first instances in modern American history in which popular opposition to a war caused our elected officials to decline to fight it in the first place. Or it could still happen, because the lesson of John McCain is, you can be taken seriously forever in Washington if you always want more war.