The biggest volcano on earth is under the ocean

"Tamu Massif," roughly the size of New Mexico, lies halfway between Hawaii and Japan beneath the Pacific Ocean 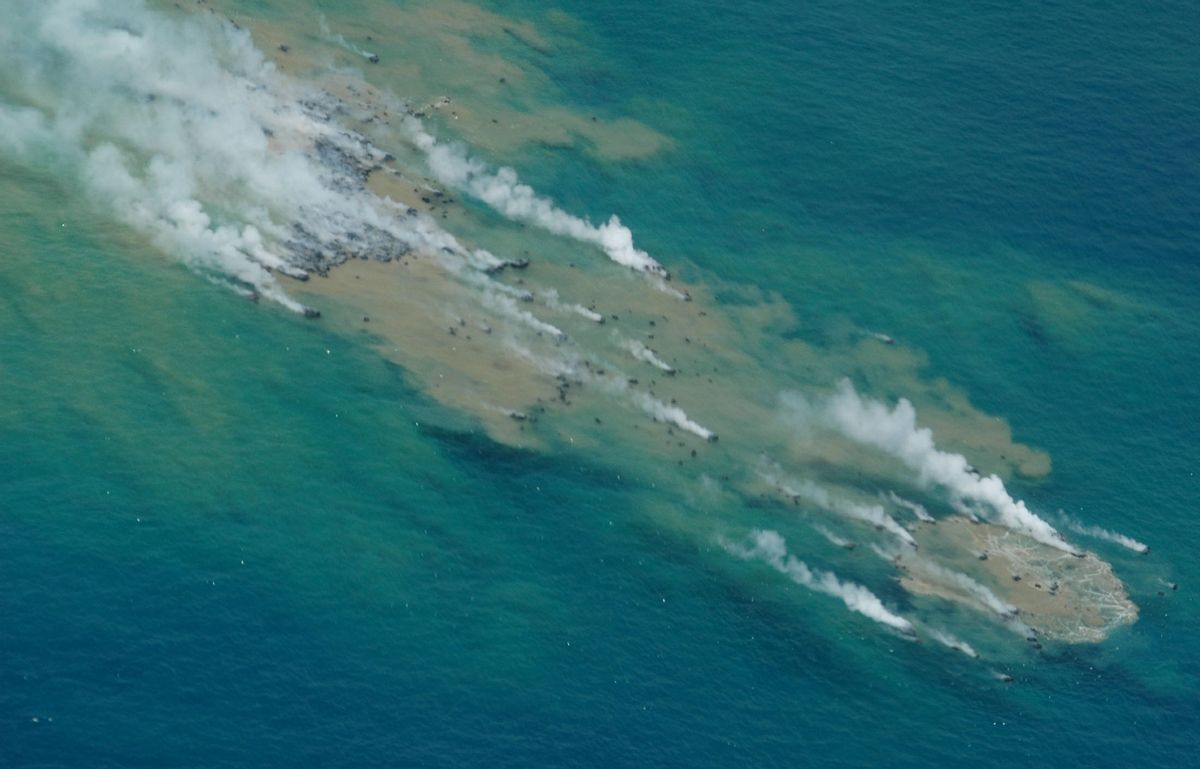 The biggest single volcano on Earth is in the Pacific Ocean, roughly halfway between Hawaii and Japan. Dubbed 'Tamu Massif,' the humongous volcano erupted almost 150 million years ago.

A volcano submerged under the Pacific Ocean might be the biggest volcano on Earth – depending how you measure it.

“Our final calculations have determined it is about 120,000 square miles in area, or about the size of the state of New Mexico, making it by far the largest ever discovered on Earth," says geologist William Sager, who has studied the massive volcano for over 20 years and who gave it the name "Tamu Massif." "It rivals in size some of the largest volcanoes in the solar system, such as Olympus Mons on Mars.”

That last statement might be a bit of a reach – Olympus Mons is not only the size of Arizona, it's also over 70,000 feet tall. You'd have to stack five or six Tamu Massifs on top of each other to reach that high. (The largest active volcano on Earth is Mauna Loa in Hawaii, which stands 33,000 feet tall, but has a footprint only about 2,000 square miles.)

Tamu Massif gets its name from Texas A&M University (TAMU), where Sager worked and taught for 29 years. Massif is a loosely defined geological term for any mountain-sized feature, from the French word for massive.

Sager and his team had been studying a large underwater area about halfway between Japan and Hawaii, known as the Shatsky Rise. After identifying three mounds in the plateau, he says, "We got tired of referring to them as the one on the left, the one on the right, and the big one."

What makes Tamu Massif so remarkable, in addition to its enormous footprint, is its simplicity. Unlike most other massive volcanoes, it erupted from only one vent, Sager argues in a recent paper in the peer-reviewed journal "Nature Geoscience." It's not a complex of several volcanoes, like Hawaii's big island, but "a single, immense volcano constructed from massive lava flows that emanated from the center of the volcano to form a broad, shield-like shape."

In fact, Tamu Massif's slopes are so gentle that it looks more like a plain than a mountain. Climbing it, if it weren't underwater, would be more like a long walk than summiting one of the Rocky Mountains. With slopes of less than one percent, Sager says, “If you were standing on its flank, you would have trouble telling which way is downhill."

The volcano was formed about 145 million years ago, at a "triple junction" where three tectonic plates were ripping themselves apart. The nearly flat slopes show that the lava must have poured out at tremendous rates, Sager argues, constructing the entire, enormous volcano in just a few million years.

Geologists have debated whether the enormous volcano was formed from a mantle plume, like the one that formed Hawaii, or from the mid-ocean ridge eruptions like those that built the Mid-Atlantic Ridge, or perhaps a combination of the two. None of the models readily explain how so much lava poured out of a single vent.

“Its shape is different from any other sub-marine volcano found on Earth, and it’s very possible it can give us some clues about how massive volcanoes can form," says Sager. "This is important information for geologists trying to understand how the Earth’s interior works.”