While banks pull out of student loan business, the government is still making bank on student debtors 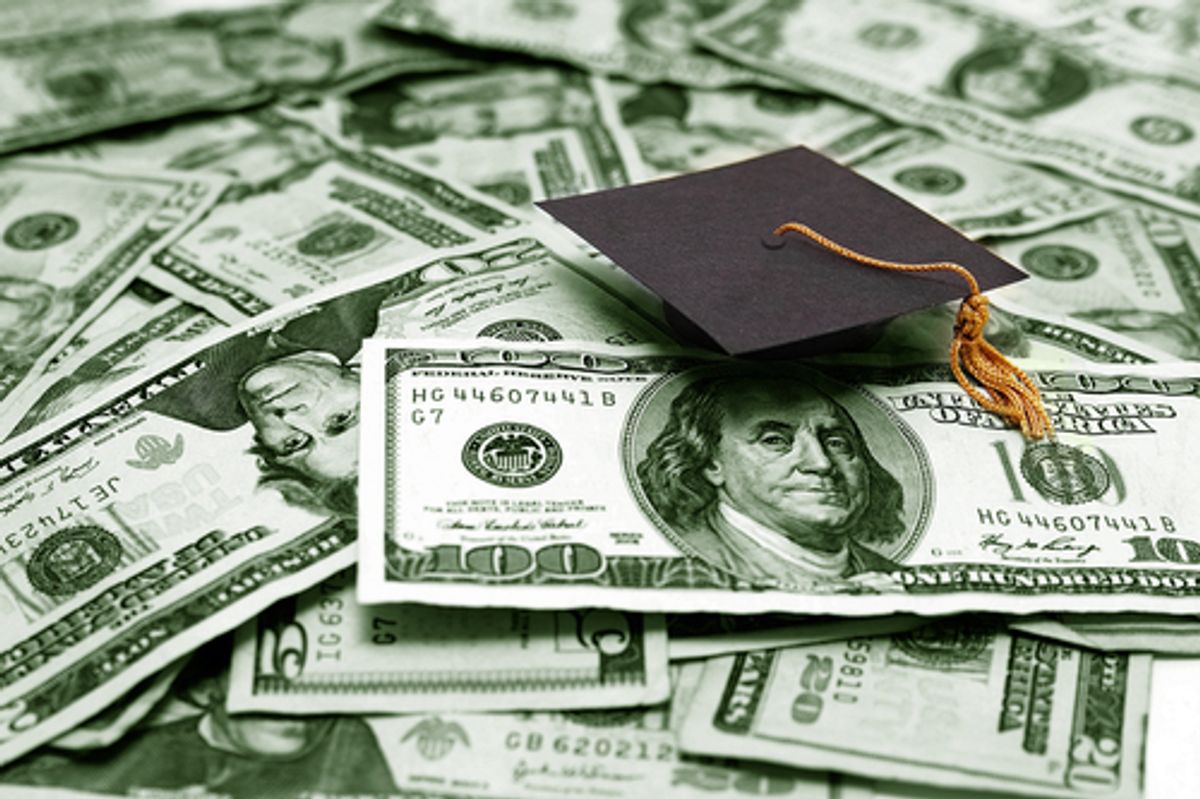 News that Wall Street giant JPMorgan Chase will cease to make student loans next month, whispers about the much-anticipated burst of the vast student loan bubble are growing louder.

And while commentators hear long-awaited echoes of the subprime mortgage bubble pop (the JPMorgan news is "is eerily reminiscent of the subprime shutdown that happened in 2007. Each time a bank shuttered its subprime unit, the news was presented in much the same way that JPMorgan is spinning the end of its student lending" wrote CNBC's John Carney and Jeff Cox). But the student loan bubble is not bursting -- because, at base, it's not really a bubble (if we're working on the assumption that all bubbles burst that is).

While the bubble-as-metaphor suited the myth of ever-increasing housing prices, which came to a halt in 2007. And while student loan rates have far outpaced the growth seen in the real estate market in the years before 2007, the government, unlike the markets, will sustain student debt while profiting from it.

Student loans are different for twofold reasons. Not only are they government-backed, but the government itself monopolizes the vast student loan market. On top of this, student loans can never be discharged through bankruptcy -- they do not disappear.

And while JPMorgan asserted, "We just don't see this as a market that we can significantly grow," the government has strong reasons to stay in the student loan racket: around $51 billion (so equivalent to the government's entire intelligence budget) is the estimated government haul from student loans for 2013.

"These revenues are profits—the government is profiting from student debtors. That some commentators have objected to this terminology illustrates widespread denial about the nature of the student-debt crisis," commented Malcolm Harris in the Boston Review.

Private loans (like those that will JPMorgan will stop offering) account for just $150 billion of the $1 trillion in outstanding education debt. The student debt crisis is buoyed -- indeed structured around -- government lending. Harris detailed how the government can continue to profit from indebted students, and how these profits (and so the student debt bubble) is not deflating any time soon:

The huge profit flows from the divergence between the government’s borrowing rate and the interest rate at which borrowers repay their loans. While student borrowers do pay a low interest rate as compared to commercial loans, the Treasury’s 91-day Bill Rate has been stuck under one percent since the 2008 financial crisis; right now it’s at a historical low of .07 percent. If you can get money for nearly free, as the Treasury can, lending at even a small interest rate yields a significant profit when multiplied across hundred of billions of dollars in loans. The federal government’s stated intention was never to make money from the direct lending program, and all their projections have the T-Bill rate recovering to pre-2008 levels any year now, which would eliminate the profits, but so far this hasn’t happened. Nor has there been a wave of defaults and nonpayments commensurate with the slow economy that the low Treasury rates could have helped offset. Instead, borrowers are stuck with the worst of both worlds: stagnant wages, escalating costs, and no exit in sight.

Harris (a good friend of mine, I should note) has more than once made this point, that bears again repeating here: "student debtors had no hope for relief short of expatriation, revolt, or suicide." The government has every interest in keeping this debt bubble in tact.