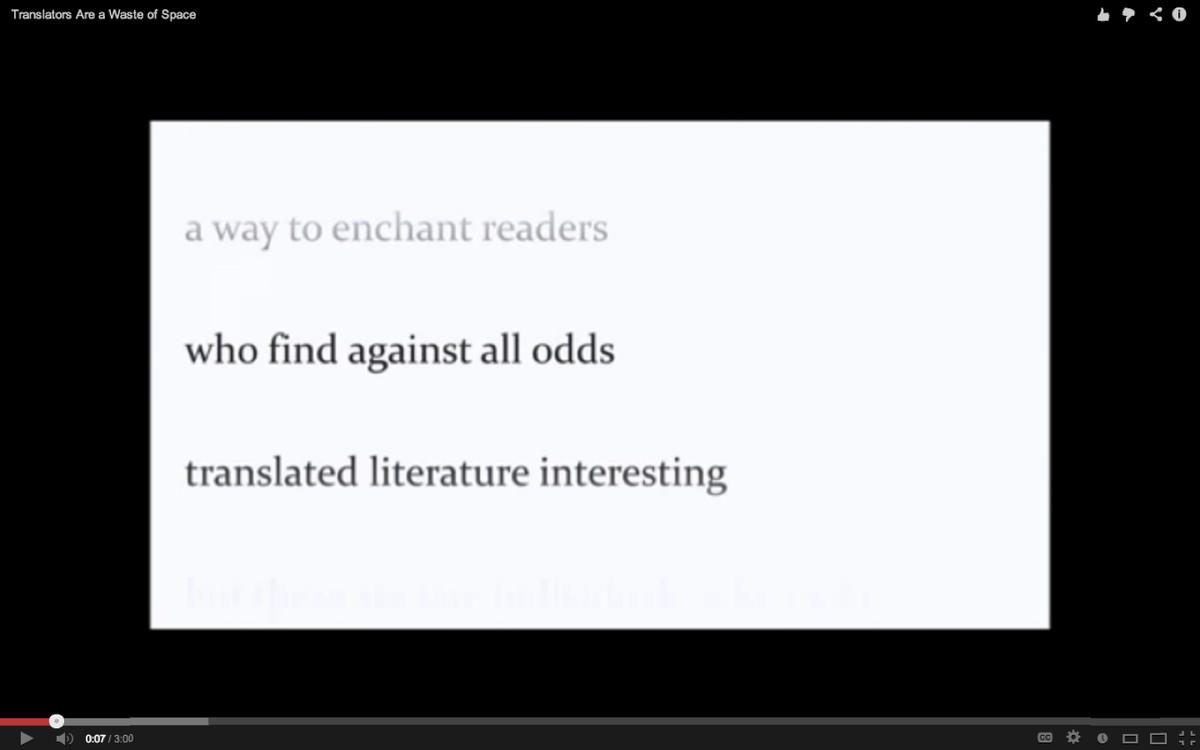 Great literature doesn’t just magically translate itself — that’s the point that CEATL, the European Council of Literary Translators’ Associations, seeks to make in their annual "Spot the Translator" video contest.

The organization has called for submissions of “sparky and clever short films,” up to three minutes in length, “reflecting the existence and importance of literary translators, their challenges, and their role in literature.”

The results of the 2013 competition aren’t in yet, but it’ll be mighty difficult to top the counterintuitively titled “Translators Are a Waste of Space,” which makes use of reversible text to present and then dismantle a straw man argument using the exact same words both times.

“Translators are a waste of space, if you ask me—linguistic morons who think it’s only a way to enchant readers who find, against all odds, translated literature interesting,” the video begins, in oddly confrontational tones, going on to disparage the profession at length.

Make it to the 1:30 mark, however, and you’ll see the entire opinion reread scrolling backwards, wholly inverting its meaning, until we see the introduction/conclusion once more, in a different configuration: “... these are rare individuals who make translated literature interesting, who find against all odds a way to enchant readers. It’s only linguistic morons who think translators are a waste of space, if you ask me.”

That’s hardly the only contest entry—there’s an entire Facebookpage of short videos celebrating the role of literary translators. CEATL will choose a winner from among the top ten most “liked” posts, so you’ve got some say in who takes home top honors here. Still, we're pretty sure that Erik Skuggevik, who wrote and performed the monologue for The Norwegian Association of Literary Translators, can practically bank on winning that €1,000 prize.

In the meantime, why not make pick up Fatso, a Norwegian novel by Lars Ramslie, the English translation of which comes courtesy of Skuggevik and his partner, Deborah Dawkin. Or, if you’re feeling lazy, stream the subtitled 2008 film version on Netflix. Who translated it better? You decide!