This week's election episode of "The Newsroom" is light on actual election night coverage. That's a good thing 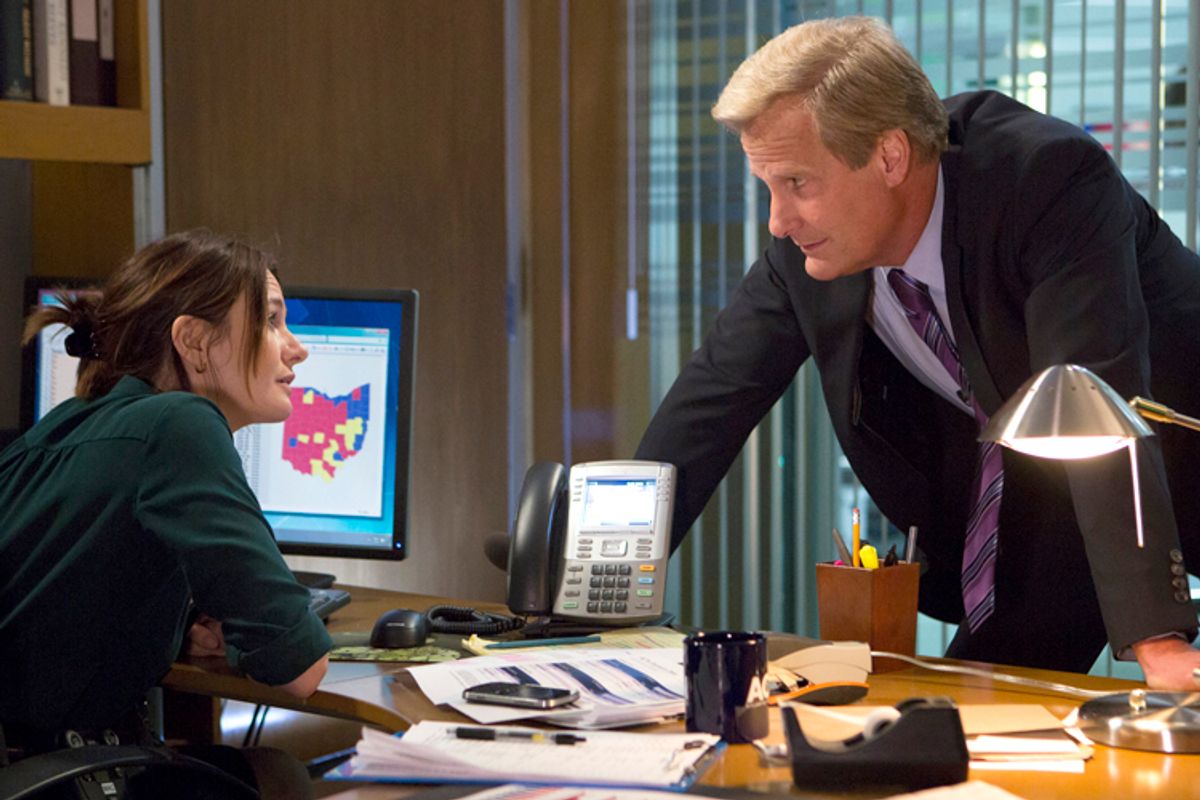 Sunday night's episode of HBO's "The Newsroom" (spoilers follow) is entitled "The Election, Part I." Anyone familiar with the show's founding conceit will automatically and correctly assume that the episode focuses on the night in 2012 when Barack Obama was re-elected as President of the United States. However, most fans will probably be surprised to see how creator Aaron Sorkin and the show's writers handle the historical events in question -- especially given the dry pretentiousness of the Romney bus scenes from earlier this season.

Obama vs. Romney had its share of tension, but it seems Sorkin didn't find the culmination of that race substantial enough to constitute the dramatic meat of an entire episode. Or maybe he was tired of attacking weighty topics full-on. Whatever the reason, "The Election, Part I" plays a whole lot less like your standard self-serious edition of "The Newsroom" and more like a vaguely vaudevillian romantic comedy of errors with most of the characters -- members of a respected news team -- fixating on minutia and personal quibbles while paying little or no regard to their actual responsibilities. It kind of works.

Within the first ten minutes, curmudgeonly head anchor Will McAvoy transforms into a sort of Groucho Marx figure, interrupting a conversation about a doctored news report to start an anecdote with, "True story -- which is more than we can say about the story." From that point, it's on and poppin', levity-wise. A high-ranking television producer gets adorably dyspeptic over a minor inaccuracy on her Wikipedia page. A highly-paid attorney wearing an evening gown for presumably the first time in forever refers to herself as "liquid sex." Olivia Munn's persistently goofy Sloan Sabbith gets on-air and botches the unusual details of a local senate race just because she finds the particulars amusing.

And that's just the women!

Okay, looking back, I realize that none of this sounds all that great -- or unique. Specifically, "The Election, Part I" is chock full of the type of flouncy, undignified female antics that wannabe-fans of "The Newsroom" find so infuriating. As Maggie Jordan, Alison Pill continues to be one, this week betraying any semblance of professionalism in order to undercut the man who scorned her. That said, the male characters do not represent themselves so well either.  Specifically, our beloved, mousy heartthrob Jim Harper -- typically so dedicated to getting the job done right -- makes an ass of himself holding a grudge I barely remember from the previous episode. So, I guess that's progress...?

Like all those before it, this episode includes some great lines. The pace is fast and fun -- nearly manic. And something about the tone suggests a slightly different show -- a "Newsroom" that doesn't take itself so seriously, and where we don't have to either. For all its flaws, enjoy it now. "Episode II," I suspect, is back to business as usual.