From "The Social Network" to "The Newsroom," his work argues that life would be easier if women were just for sex 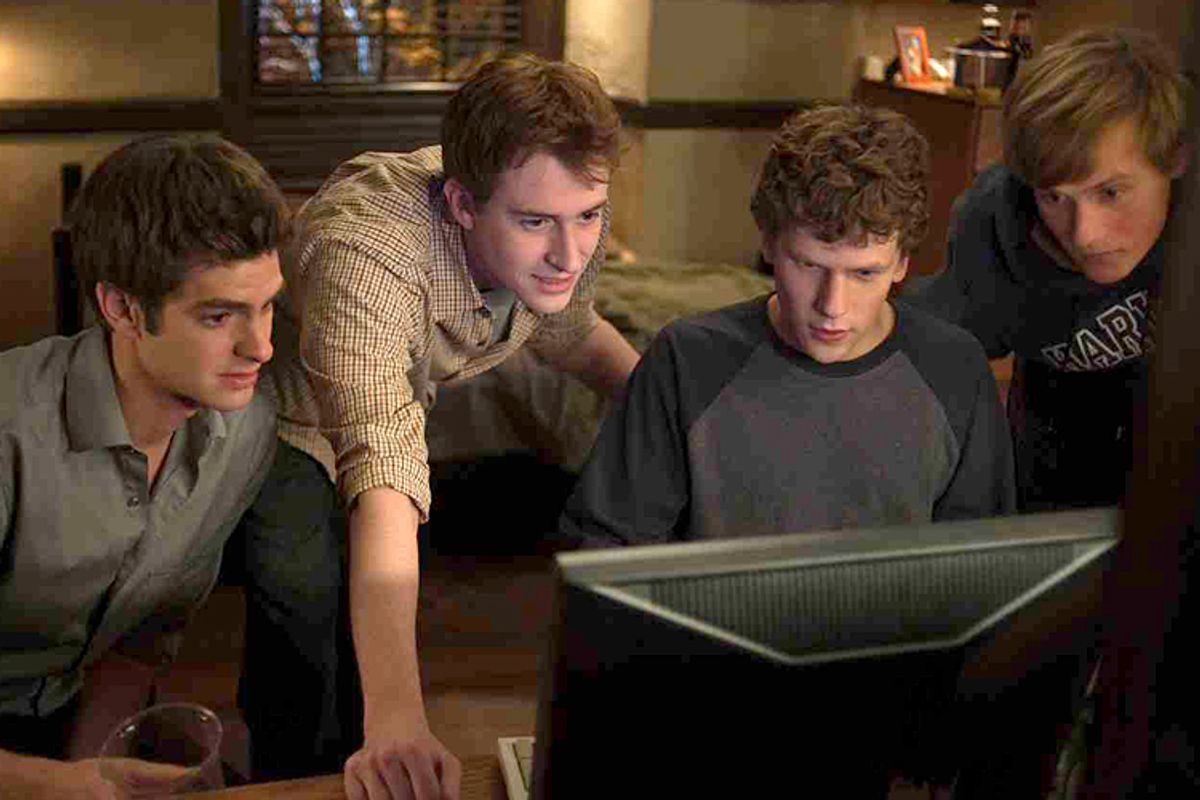 Aaron Sorkin's had a long and unusually multifarious career, during which he's been able to assay all manner of settings.

Each of these settings has been dominated by men.

Yes, this is the way the world still is, somehow, in 2013 -- the White House ("The American President," "The West Wing"), the start-up world ("The Social Network"), and television ("Sports Night," "Studio 60 on the Sunset Strip," and "The Newsroom," whose season finale airs next week), are all dominated by men. But Sorkin's vision is of a world in which male hegemony isn't just acknowledged but accepted, even relished, and in which women are always the object of male ambition or of lust. When allowed to speak for themselves, women consistently reveal themselves as being in desperate need of rescue.

Taken individually, none of Sorkin's works -- until the high-decadent "The Newsroom" -- seemed particularly striking. Let's start at the beginning: Sorkin's breakout film in terms of establishing a house style was "The American President," in which the president (Michael Douglas) romances a lobbyist (Annette Bening). That the president is consistently able to glide above the questions of ethics and of living in the public eye that lead Bening's character to teary, wacky breakdowns on-screen makes some sense -- he is, after all, possessed of the personality type that leads one to become president. She is not.

But by film's end, Douglas' character has been allowed to be, throughout, decisive and in control, while Bening, who's able to vociferously defend her policy positions but melts with embarrassment when meeting the president, is in need of rescue. The president deprioritizes the legislation the lobbyist has staked her career on in order to score a political victory, but gets to keep her anyway after a short separation. It's the president who gets to deliver the big speech; in Bening's big scene, she cries after having been fired from her job.

This is the Sorkin universe -- one in which women, when they are present, exist in subservient positions, never as equals, even in romance. There is always a winner and a loser; the romance necessarily exists as two people operating at cross-purposes, and the man gets to win.

In "The Social Network," Sorkin viewers got a holiday, as the female characters were reduced to underwear-clad hussies; "Women are both prizes [and] equal" in Silicon Valley, Sorkin said at the time of the film's release. (The by-all-appearances equal relationship between Facebook founder Mark Zuckerberg and now-wife Priscilla Chan is entirely left out of the film, in service of the argument that Zuckerberg started the company due to his inability to understand the inscrutable fairer sex and made the whole site to better comprehend Rooney Mara's character.) And yet women are prizes and unequal in Sorkin's work; the American president gets to keep his girl even despite ruining her professional life.

Will McAvoy, on "The Newsroom," makes text what was subtext; it could be argued that Andrew Shepherd of "The American President" acted honorably, according to some code, while Will simply harangues any woman in his line of sight. He manages to bed gossip columnist Nina Howard -- based on a real-life love interest of Sorkin's -- despite mainly using his time with her to lecture her on how her snarkiness is destroying America. Left entirely out of the conversation is that they might simply have differing perspectives, or that Nina's ability to do her job without constant crises of conscience over the implications of her actions is in its own way admirable; Nina accepts the lecture and falls into bed with him.

The other woman in Will's thrall is MacKenzie, the woman who in the most recent episode was more unable than ever to effectively perform the duties of her job and begged to be fired, amid a lengthy argument between the two over the pair's romantic history. Will gets to be the merciful one and fire her; MacKenzie gets to be the object of his fury and his thwarted desire. He tells her that for a beautiful woman, she looks ugly, and encourages her to get some rest. The other women are portrayed no more flatteringly; Maggie is prone to emotional breakdowns of the sort that the show frames as manic when she undergoes them but as heroic when a man does, while Jim's current girlfriend, Hallie, is trying to get Jim as a source on a story about the cable network, a monumental breach of journalistic ethics.

"The Newsroom's" shocking presumption that no woman can do her job effectively or without the ulterior motive of finding love, while men are consumed with higher things, jibes with other isolated incidents throughout Sorkin's work. Dana Whitaker's ability to effectively act as a producer on "Sports Night" is treated as a thing of wonder, and the show sets up a bizarre catfight-y rivalry with her counterpart at another network, Sally Sasser. Dana exists as a fairly one-dimensional sounding board for the troubled men around her. It is their crises, and Dana's jellyfish-like ability to move according to the currents of male emotion, that drive the show. On "Studio 60," the character said to be based on Sorkin's ex Kristin Chenoweth is a target of scorn for her conservative beliefs; she shares a romantic past with the titular comedy show's head writer. But "The Newsroom" takes the perspective that women can't help themselves to its logical conclusion, where no woman but the harridan-like, ball-busting Marcia Gay Harden and Jane Fonda characters are able to do anything successfully, when they're not being duplicitous.

On "The West Wing," at least, Aaron Sorkin created a memorable female character; the president's press secretary, C.J. Cregg, as played by Allison Janney, got her own story lines and won Janney four Emmys. And Sorkin seems to have moved further and further away from creating another C.J. with each successive year. Sure, C.J. ultimately worked for a male president, but she was able to operate with her own authority; Will McAvoy's female producers, who should be able to have some control over him, serve only to make Sorkin's argument that the workplace would be a calmer and less dramatic place if it were like the Silicon Valley "The Social Network" depicts, a place where women exist only for sex.