The Area 51 truthers were right

The government misled us about Area 51 for decades. Why aren't we outraged? 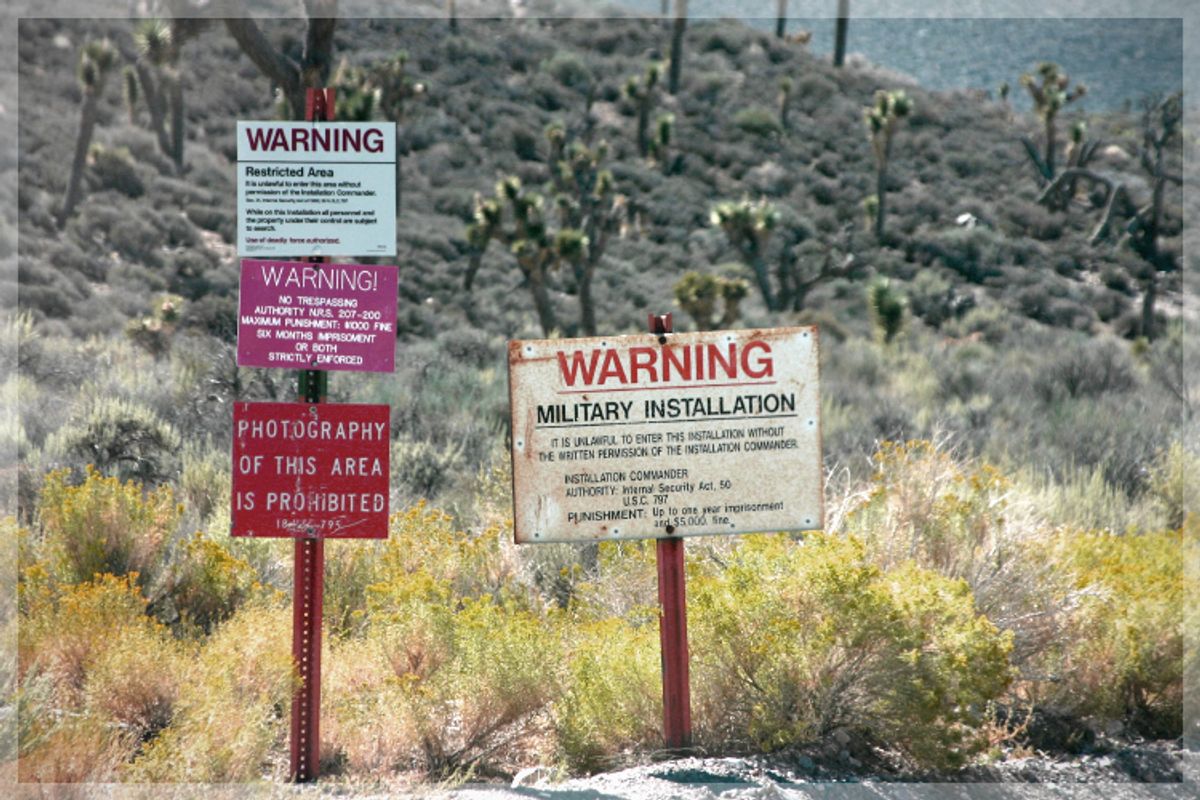 The warning signs on the road leading into Groom Lake, aka Area 51. (sipaphoto via iStock)
--

Last month, the CIA issued its first-ever admission of the existence of Area 51. An official report on the U-2 spy plane, released upon request of a George Washington University archivist, acknowledged Area 51’s location at Groom Lake in Nevada. Of course the news was trending on Twitter, and lists were created on the best Area 51 appearances in movies and television, but like everything else that trends on social media, it was eventually recycled out of the news feed, and Americans let out a collective yawn and started tweeting about #Batfleck. There was no rioting in the streets; there was no picketing outside the White House; and a great injustice to our freedoms went relatively unnoticed.

Over 60 years Air Force officials told citizens of Nevada and airplane pilots noticing strange objects in the sky that they were witnessing reflections of light caused by natural phenomena, weather balloons or swamp gas. This led conspiracy theorists to a bizarre but in some ways reasonable conclusion: the government was covering up the crash of a flying saucer in Roswell and the existence of aliens. To the disappointment of many, there was no mention of “green men” in the CIA report—just spy planes.

So why are we not more outraged that for half a century our government has been feeding misinformation to its citizens? Why are we not demanding an explanation? Why are we not furious that official reports and spokespeople are merely phantoms, figments of the imagination, ghosts in a collective machine?

“Like we didn’t know something was top secret and classified,” quipped Robert A. Goldberg, author of "Enemies Within: The Culture of Conspiracy in Modern America" and professor at the University of Utah. “The news has been out for quite a while…I think part of it is the timing, but if this occurred 10 to 15 years ago, it would have been much more of a stir.”

For many Americans, Area 51 was old news. In 2011, Annie Jacobsen, national security journalist and contributing editor to the Los Angeles Times Magazine, wrote a book called "Area 51: An Uncensored History of America’s Top Secret Military Base," and she interviewed former scientists and employees at the base. The CIA still refused to admit that the base existed after Jacobsen’s book, which makes the CIA’s choice to declassify now even stranger.

The timing, as Goldberg notes, is part of the reason why more Americans aren’t outraged. With Edward Snowden leaking information about the NSA, with the CIA admitting to its role behind the 1953 Iran coup, with American and British governments setting up fake coffee shops to spy on delegates at the 2009 G20 Summit, Area 51 is just the B-Side to the governments’ classic hits of recently released top-secret information.

Many in America accept our government’s need for secrecy because it allegedly protects us from terrorism. But at the same time, the confidence Americans have in their government has plummeted.

“What we have seen is a massive erosion in the people who have confidence in the federal government,” says Goldberg, “even American institutions… Right now the trust in the government to do what is right is below 25%... That to me is the real crisis. Because if people don’t trust their leaders and institutions, you have a major compromise of American democracy and how the system could possibly work.”

Clearly there are many people who believe the government should take the necessary means to protect their citizens, even if it means keeping certain information top secret.  “Sometimes the government should be more transparent,” said Leo Braudy, professor of English and history at the University of Southern California, “and other times I think they are right not to be transparent.” Braudy added, “We’re fearful, and we want to be protected…That’s one of the functions of government.”

Clearly protecting American citizens is important, but is secrecy and misinformation the best practice? Documents released under the Freedom of Information Act and stored in the National Archives describe Project BLUE BOOK, an operation wherein Air Force officials gathered reports of UFOs and offered accounts of natural phenomena to explain them away. “From 1947 to 1969" the documents read, "a total of 12,618 sightings were reported to the Project BLUE BOOK. Of these 701 remain ‘Unidentified.’” BLUE BOOK was basically a program to feed misinformation to Americans to hide the fact that the Air Force was testing spy planes.

For years people in Nevada saw something in the sky, and when they reported this information to the government or the Air Force, they were deflected and given responses from Project BLUE BOOK. In essence, these individuals saw something real, and the government told them it didn’t exist—or was a misinterpretation. This is what is so frightening; by controlling and choosing how to disseminate information, the government becomes a major stakeholder in what is real—and what is not.

How does it affect the American psyche when people who clearly see something are told they are wrong? How does if affect the way we see ourselves as a culture when huge sections of our country are mysteriously stricken from the grid? And are we making an unconscious choice when we fail to be outraged over government coverups?

For the sake of argument, let’s imagine that the most “popular” conspiracy theories were revealed to be true—the federal government was behind the assassination of JFK; 9/11 was an inside job; and the moon landing was filmed in Hollywood—how would our country react? Would we riot? Or would we close our eyes and pretend like nothing happened?

If we choose apathy in the presence of these government revelations like Area 51, we are in danger. As George Orwell wrote in "1984," “For, after all, how do we know that two and two make four? Or that the force of gravity works? Or that the past is unchangeable? If both the past and the external world exist only in the mind, and if the mind itself is controllable—what then?” And here is the problem: By allowing a government to manipulate information in order to maintain secrecy, we may be allowing them to destroy the very ideas of objectivity and reasoning. That’s the great injustice of the revelation of Area 51: It further confirms that for the officials we trust to protect our freedoms, truth and reality are malleable.