She blamed the Muslim Brotherhood for 9/11. And so much more 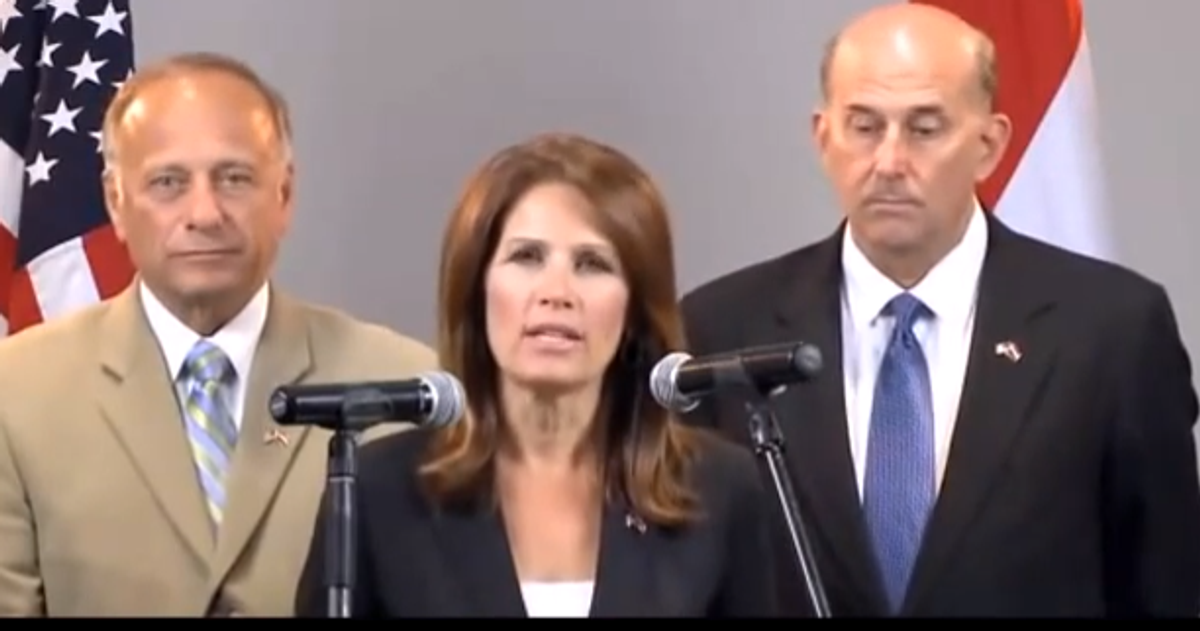 She sang "Happy Birthday" to Elvis on the anniversary of his death. She said the HPV vaccine causes "retardation." She claims to have been trapped in a bathroom by lesbians.

But this is GlobalPost, so we're here to talk about the Middle East.

The most recent amazing thing Bachmann did was to say that the Muslim Brotherhood is to blame for 9/11. She did this at a news conference broadcast over a pro-government satellite network in Egypt on Sunday. Here it is:

This is not her only foray into making things up that have to do with the Middle East. She has done this lots, so we decided to make a list. Major hat tip to Juan Cole, whose research proved invaluable in collecting these gems:

1) When Bachmann was campaigning for the presidency in 2011, she said that if she won, she would immediately close the embassy in Iran. (But Michele, there hasn't been a US embassy in Iran since the '70s!)

2) She said that Iran had been "delivered a nuclear warhead." She didn't say who delivered it or why, but that's OK because it isn't true.

3) In 2012, she launched an inquiry into whether the US government had been infiltrated by the Muslim Brotherhood, suggesting that Hillary Clinton aide Huma Abedin was to blame. GlobalPost got the Muslims Brotherhood's response to this, which was also amazing.

4) She believes that the United States would be cursed if it stopped supporting Israel's right-wing prime minister, Benjamin Netanyahu:

5) In 2011, Bachmann called then-president of Iran, Mahmoud Ahmadinejad, a "hater."

"I don't hate Muslims," Bachman said on a campaign stop in Iowa.

"The haters are the president of Iran," she continued. "He stated unequivocally that given a nuclear weapons he will use that weapon to wipe Israel off the map, and he's willing to use it against the United States of America."

6) She said Iraq should reimburse the United States for having invaded and occupied it. Pretty amazing.

7) Bachmann supported Egyptian dictator Hosni Mubarak to the end. She accused Obama of “sitting on his hands” as Mubarak fell in February 2011. She apparently thought the United States should have been able to stop the throngs of people from pouring into Tahrir Square.

8) She said Obama had “put us in Libya” and then was “putting us in Africa,” when he sent 100 troops to Uganda. She was apparently unaware that Libya is also located on the continent of Africa.

9) In a debate with John Huntsman during the GOP presidential primaries in 2011, Bachmann spilled classified information on Taliban attacks on Pakistan nuclear facilities. The truly amazing thing here is that she is allowed to serve on the Intelligence Committee. I mean.

10) In 2007, Bachmann, after visiting Iraq, came back with a notion that someone (maybe the Bush administration?) had made a deal with Iran to give half of Iraq to it (apparently the Sunni part) and that Shiite ayatollahs would then run that annexed territory as a radical Sunni terrorist base against the United States:

“Iran is the trouble maker, trying to tip over apple carts all over Baghdad right now because they want America to pull out. And do you know why? It’s because they’ve already decided that they’re going to partition Iraq.

And half of Iraq, the western, northern portion of Iraq, is going to be called the Iraq State of Islam, something like that. And I’m sorry, I don’t have the official name, but it’s meant to be the training ground for the terrorists. There’s already an agreement made.

They are going to get half of Iraq and that is going to be a terrorist safe haven zone where they can go ahead and bring about more terrorist attacks in the Middle East region and then to come against the United States because we are their avowed enemy.”

11) She invented US drone strikes on Libya and “North Africa” in her questioning ofprospective CIA director John Brennan:

DIR. John Brennan (director of central intelligence): Armed drone strikes in Libya? I’m unknowing of such, and I would defer to the White House to address your question.

REP. Bachmann: Were there any armed drone strikes in Northern Africa that were made by the White House?

DIR. Brennan: White House doesn’t have a drone capability, responsibility, whatever. So I –

REP. Bachmann: Did they have any directives toward having armed drone strikes in North Africa?

DIR. Brennan: Again, I don’t know what it is specifically you’re referring to, but again, I would defer to the White House on whatever happened at that time.

DIR. CLAPPER: (Referring to ?) the capability, the UAVs that were over — flying over Libya were military and were unarmed. REP. Bachmann: And so were there any armed drone strikes that were made in North Africa prior to 9/11?

DIR. Brennan: Well, we usually don’t talk about any type of specific actions, but again, I don’t know what you could be referencing.