NBC's new game show premieres with an interactive element, but is it worth the food and sleep deprivation? 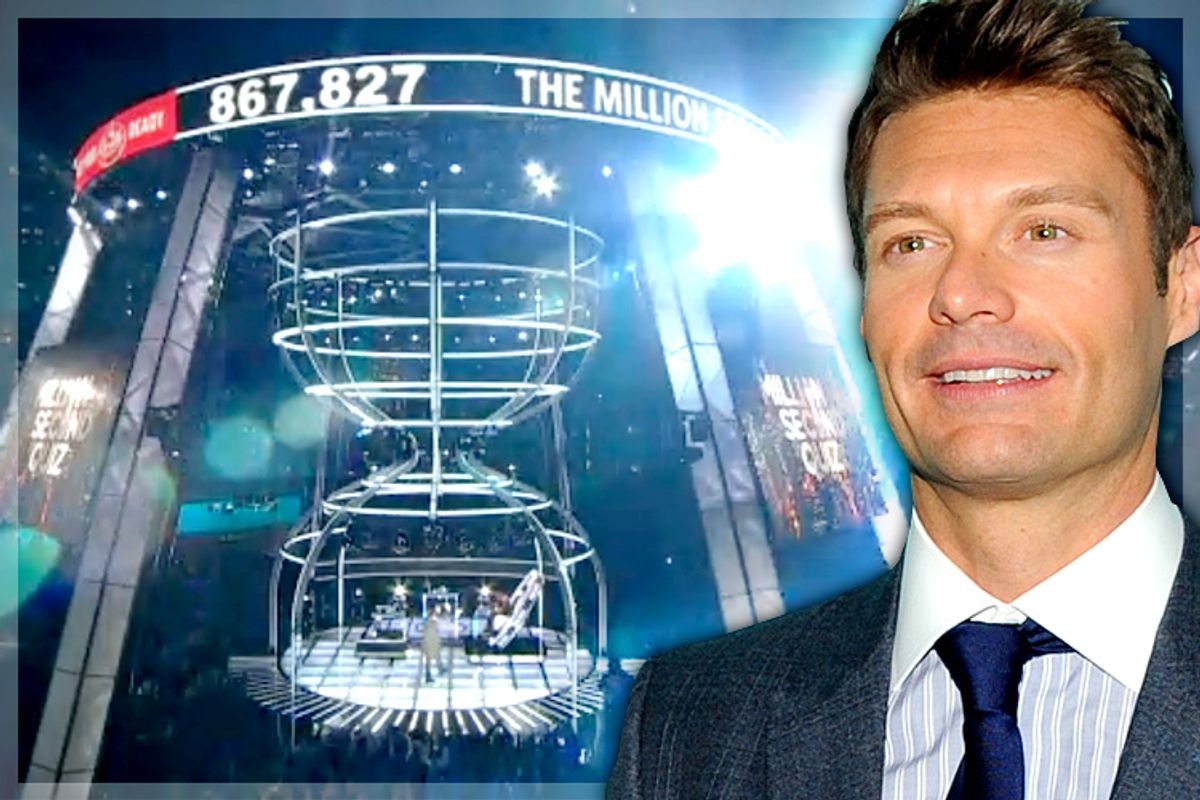 Less than 10 minutes into last night’s premiere of “The Million Second Quiz,” I was already confounded -- not by the questions, but by the new game show’s many, seemingly arbitrary rules. What with the "Doubler,” the “Money Chair,” and all its other contrivances, for a moment I felt as if I was watching a glitzier, Ryan Seacrest-hosted version of "Chardee MacDennis: The Game of Games," the nonsensical drinking contest from “It’s Always Sunny in Philadelphia.”

To be fair, though, I wasn’t prepped. I had not been playing along at home, on the bus, or in the break room with the millions of other Americans who downloaded the MSQ App a week ago and were already well-versed in the game’s structure. In fact, I didn’t even watch the premiere in real time; I found it On Demand this morning. But according to a source at NBC, “Million Second Quiz” was the No. 2 show on the four major networks, second only to “Under the Dome.” (Note to self: catch up on “Under the Dome.”)

That app is undoubtedly a source of the the show’s popularity -- and, ostensibly, its uniqueness. Anyone with a cellphone and an above average knowledge of minutiae can potentially end up onstage in New York City telling Seacrest his or her life story and facing off against a total stranger over the chemical symbol for iron. To emphasize that “it can happen to you” aspect, the show is set up at least superficially like “American Idol.” There’s a long line of eager, wannabe contestants outside the soundstage and a chosen few get to have Seacrest smile and throw to a presumably moving video reel of them having dinner with their families or battling some hardship.

It’s not the contestants’ home life that I find most intriguing, however. It is their lodgings and living conditions during stints on the show. The players in the top four positions are given identical cramped beds like in a brightly lit pod hotel and made to live in the studio, always ready to compete. One contestant complained about finding time to take a shower and not knowing when food is coming! Indeed, she did seem a bit frazzled trying to answer multiple choice questions about banal current events on camera, sleep-deprived and without makeup.

Other than the interactivity and the vaguely “Survivor”-like element, almost everything else about “The Million Second Quiz” feels familiar, in particular Ryan Seacrest’s presence. It’s not like I will continue to watch the show, especially once I figure out exactly how it’s played. But no matter how many “events” Ryan Seacrest invites you to, there is something about his voice and enthusiasm that make you feel like you should stick around for a few -- just until you see what all the fuss is about.