With images and words, the artist explains why she’s too curious to show experimental films in a typical theater

By Sponsored by Hendrick's Gin 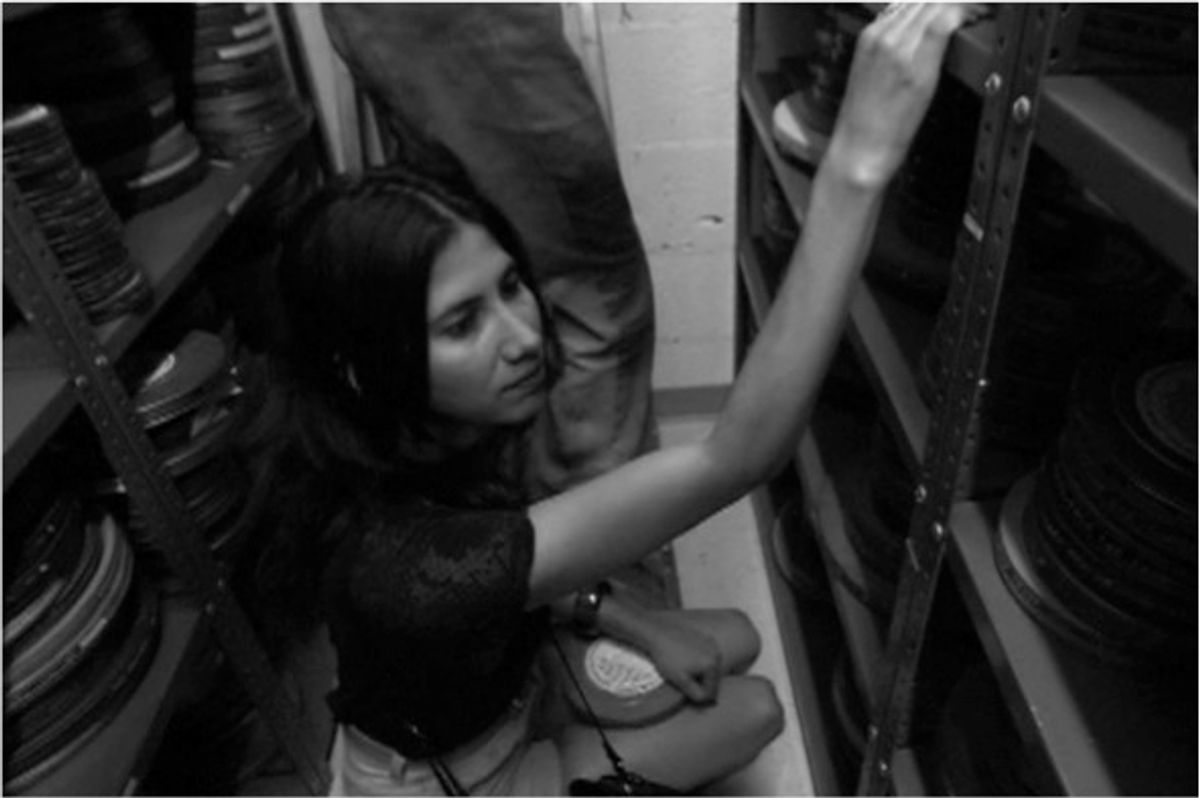 This is the second installment in a new series called Keepers of Curiosity, featuring interviews with intrepid performers, artists, writers and culinary-minded individuals with a thirst for discovery and innovation. The series is brought to you by Hendrick's Gin. To read the other interviews in this series, click here.

What do you do?  I am an artist whose practice takes on a variety of forms. My greatest concern is creating physical experiences that connect people to their own bodies and the “communal body.” These ideas are influenced by the traditions of social sculpture, happenings, séances, and rituals, among other things. One major part of my art life is dedicated to the development of my program Cinema 16.  I founded the series in 2008 after living in New York City for a few years because I was interested in resurrecting the public cinematic experience.

I named it after the New York-based avant-garde film society, which was founded in 1947, by Amos Vogel and his wife who were inspired by a Maya Deren film exhibition in Greenwich Village. I have also been endlessly inspired by her work. They would show subversive documentaries in a pre-Michael Moore world, when documentaries were still a rare medium. Recently, watching films has been reduced to the tiny screens on our laptops and iPods, and oftentimes viewed alone. The show is nomadic and has traveled to museums and galleries, including The Metropolitan Museum of Art, MoMA/PS1, The Kitchen, and The Museum of Moving Image.

In my own work, I use film as a launching point to explore genre, the psycho sexual, the fragmented body, gender, and ritual.

How would you describe your work? Cinema 16 is a free-floating series that transforms a given venue into a roaming performance space. Working on a given show for six months to a year, I commission musicians to create site-specific performances. All of my work offers the viewer a theatrical experience. Each time I enter a space I’ll exhibit in, I am very mindful of the architecture. It is critical to reinvent it and foster a relationship between the audience and the screen. This is why I prefer never to show in a traditional movie theater.

What curiosity does your work satisfy? One of the most remarkable things about being an artist is how open you are to exploration of ideas, histories, materials, and people. My work is highly collaborative so I get to work with musicians, designers, sound artists, opera singers, scientists, architects, botanists, you name it. One week, I’ll be in L.A. meeting with my friend Eddy Sykes, who’s a genius fabricator, and the next I’m checking out a hydroponic farm in Bushwick, Brooklyn. It’s all research for my solo show in January.

Where do you mine inspiration? Anything that Adam Curtis does, over dinner with people I know or don’t know, at Laundromats, from Yahoo! News, Ana Mendieta, on the radio, at museums, in hotel rooms, looking through Ivan Sunshine’s records, in people’s gardens, Ghost Capital blog, watching Pina Bausch, storefronts, listening to the sound of languages I don’t know, from David Lynch movies, art catalogs, movie theaters like MoMA and Anthology, libraries, hearing Matteah Baim sing, spending time in the desert, Parajanov films—and mostly, when I am quiet and about to fall asleep.

Is your work for now or later? When it comes to my film projects, I believe viewing is a ritual and my goal is to create new rituals that draw from the past. Starting in the 1960s and ’70s, there was a real cultural shift, bringing movies into exhibition spaces. I’m dedicated to continuing this legacy. In my opinion, the body memory and narrative of the theatergoing experience can actually prevent a viewer from letting go of preconceived notions about what they will see and hear. That’s why I work with avant-garde, often non-linear films which are isolated from the trajectory of commercial cinema.

What's your next project? I’m starting next year with two really exciting projects: First I will have my first solo exhibition at Gasser Grunert called “Bali Hai,” exploring the construction of paradise and its vulnerabilities and failures. Then Cinema 16 will make its first international debut. I’m working with the Center of Contemporary Art in Tel Aviv and the band Boom Pam to make an extraordinary show.

When are you at your most inquisitive? If you don’t thrust yourself 100 percent into what you do with grace and vulnerability, then curiosity just becomes a fashion statement. We are in a time when everyone consumes knowledge like a sort of commodity. Curiosity is more about consuming information, than actually spending time with it, considering an image, marinating over a word. I am only interested in authentic and sincere experience.

When I meet someone who dazzles my sense of wonder I would travel across the world to see what they might do, say, or make next. Charles Eames once said, “To excel...we must be committed to a concern for quality in everything in the world around us. We must learn to care deeply.” I truly believe that Cinema 16 is successful because people realize what a special experience they are participating. Each element is finely crafted; each musician spends months crafting a score that will be played for one night only and not replicated online. You cannot download this experience.

MORE FROM Sponsored by Hendrick's Gin