The key out of this mess is Samantha Power

As with Adlai Stevenson in 1962, we need to come before the U.N. and lay out what we have in the way of evidence 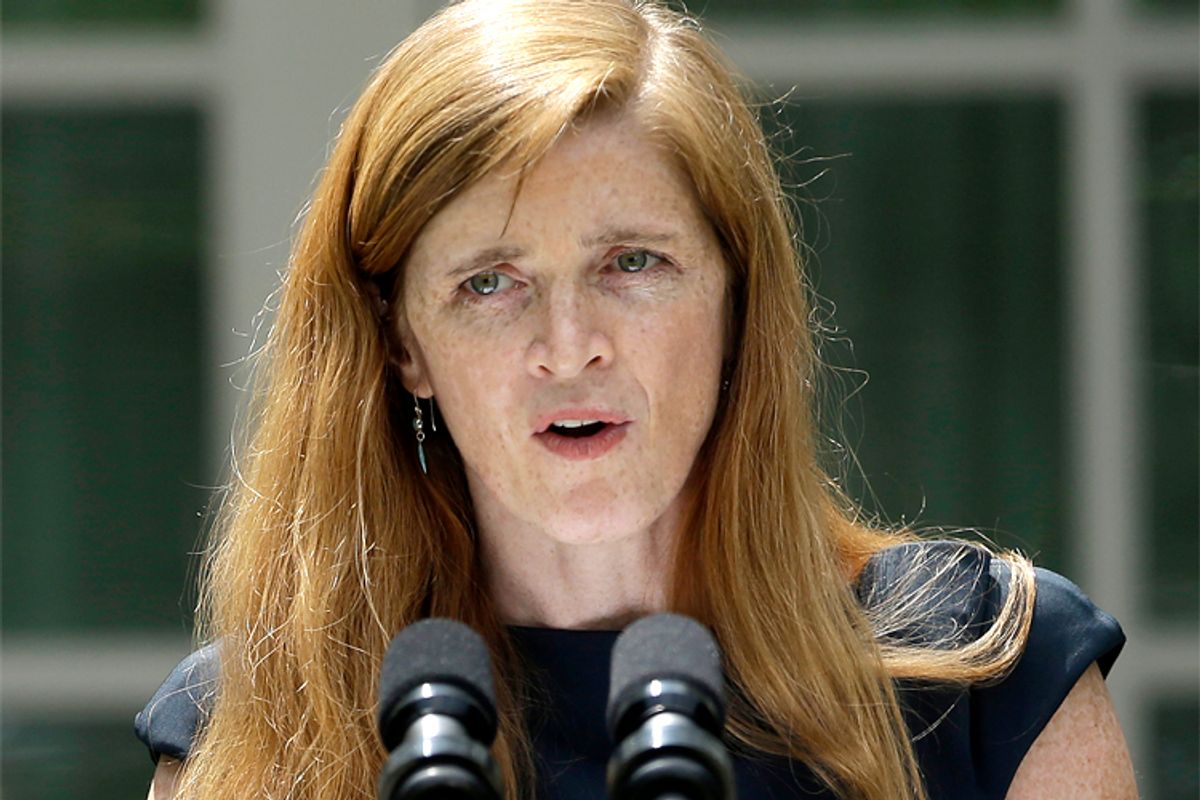 Two years ago, around this time of year, I was covering the U.N. General Assembly in New York as the world was trying to grasp the portents of the Arab Spring. Dag Hammarskjold Plaza, directly across the street, was dominated by supporters of a Palestinian state. But over on Second Avenue, a Syrian-American teenage girl from New Jersey had wrapped herself in a Syrian flag, a 21st century “Columbia”-like vision. She was begging busy New Yorkers to take her homemade fliers that asked us to pay attention to Bashar Assad’s brutal crackdown on dissenters. She had few takers.

Now, two years and 100,000 dead Syrians later,  we are gearing up to pay attention the only way, post-Sept. 11, we know how: with a military attack.

Even as the latest report from the U.N. High Commissioner for Refugees describes a humanitarian crisis of epic proportions on the ground in and around Syria, President Obama wants Congress to sign off on his firing of face-saving Tomahawk missiles to make a rhetorical point about the use of chemical weapons against civilians.

The U.N. says there are now 2 million Syrian exiles in neighboring countries like Lebanon and Jordan. There are more than 4 million displaced within Syria, and 40 percent of Syria’s children are not attending school. Religious diversity is under mortal attack as Christian communities are targeted for destruction. Some of these enclaves have peacefully coexisted for centuries. Rebel factions are fighting each other and the Assad regime’s brutal repression continues.

As Pope Francis has warned, a U.S. military attack will only make conditions on the ground much worse for the Syrian people, especially for the most vulnerable.

As disturbing as the recent videos are of the children who were victims of the Aug. 21 chemical attack, a U.S. attack on a nation already in such a death spiral, in a region already so unstable, is likely to set into motion a series of calamities that will dwarf the body count from the chemical attack.

So much of signing on to President Obama’s reckless plan requires accepting as gospel the precision of the U.S. military’s “surgical strikes” that boosters say only kill the bad guys without putting our own people at risk. We are told that our munitions can be guided with the precision of a circular saw by a master craftsman. For the U.S. public, drone warfare and our faith in our precision military are pathologically disassociated from the grim reality they create.

While the U.S. media will play over and over the White House-supplied videos of the Syrian gas attack, we have been spared viewing the collateral civilian death toll from our wars in Iraq and Afghanistan, as well as our drone strikes in Libya, Yemen, Somalia and Pakistan. We know with appropriate detail the thousands of fallen Americans who gave their final measure since Sept. 11, but the hundreds of thousands of civilians also killed and wounded remain faceless, nameless, mere blips as if on a video game screen. Their tragic  “collateral stories” are left for the viewers of Al Jazeera and listeners to programs like Pacifica’s "Democracy Now. "

This mytho-poetic is purveyed by the war-mongering, ratings-driven, mainstream media staffed up with ex-generals. As if in total contempt for the intellect of their audience, they roll out the very same neocon talking heads that misled us into the war in Iraq as sanctioners for this next blood-soaked misadventure.

It was this very same broadcast media that, in marking the 50th anniversary of his “I Have a Dream” speech,  whittled Dr. King’s  message down to one narrowly drawn about racial equality. What they neglected to report to the millions of people who were not around at the time was just how radical King was in his strong opposition to U.S. militarism and materialism.

In his seminal 1967 speech at Manhattan's Riverside Church, King warned that the U.S.’s proclivity toward making war, as it was in Vietnam, revealed “a far deeper malady within the American spirit.” King, a Nobel Peace Prize laureate like the president, called upon the public to mobilize against U.S. militarism and the war to save the nation’s soul.

“If we do not act we shall surely be dragged down the long, dark and shameful corridors of time reserved for those who possess power without compassion, might without morality and strength without sight,” King warned.

Let U.N. Ambassador Samantha Powers command the world stage, as one of her predecessors -- Adlai Stevenson -- did in 1962, when he documented the presence of Soviet missiles in Cuba. Hold China and Russia accountable for their “client” state, Syria.

We can’t act like the last bloody decade did not happen. If we strike unilaterally, it becomes all about us.