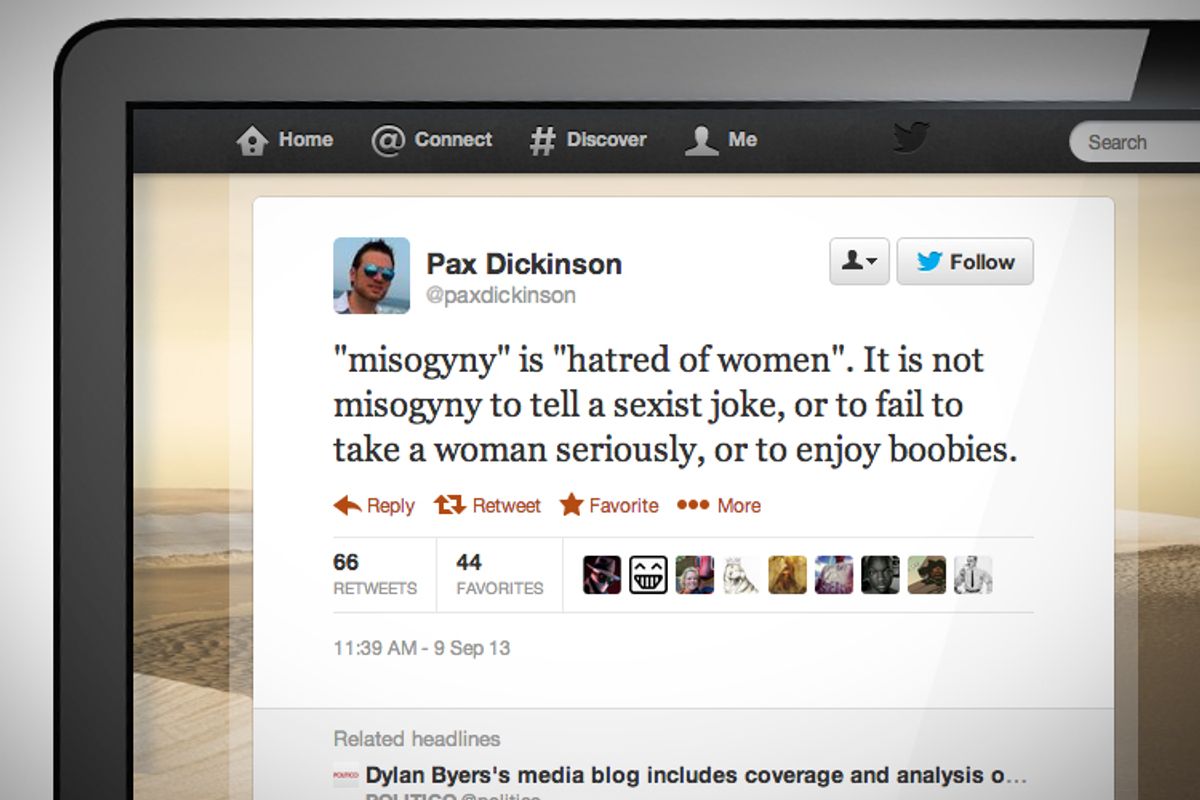 Business Insider, a publication run by a man who casually wonders “Why people hate the Jews” and thinks women are lazy, has decided that it’s finally time to take a stand against bigotry and make an example out of one bro, Pax Dickinson. For three years, Dickinson, BI’s former chief technology officer, was responsible for hiring qualified men, unicorns and not women. He was let go on Tuesday morning after his sexist comments reached a tipping point on Twitter and generated a lot of outrage.

But the sad part is that Dickinson, though perhaps an extreme case, isn’t alone in thinking that sexism isn’t an issue in the tech industry -- all the while perpetuating an environment in which women feel unwelcome and unequal. Over the weekend, TechCruch hosted a hackathon with two presentations that, at best, were like bad Seth MacFarlane jokes. But at worst, they made some women very uncomfortable in a field that already alienates them. The site has since apologized, much to the chagrin of male techies and Dickinson himself, who linked to TechCrunch's apology and tweeted: "IMO accusing someone of 'misogyny' over some low-grade sexism means you owe another apology."

What is "low-grade sexism," exactly? Unclear. But Dickinson persisted, playing a game of semantics:

Drawing a line in the sand to say, "I'm not misogynist, I'm just a little sexist," is basically saying, "I don't want to kill women or anything, I just like to make fun of them." A statement like that only proves someone's misogyny -- something Dickinson has all too eagerly demonstrated:

Just because you're not physically harming someone doesn't mean you're not being misogynistic. As one man on Twitter replied to Dickinson, "Respectfully, your definition is too narrow. The problem encompasses reductionism, exclusion and objectification." Sure, violence is an extreme manifestation of misogyny, and it is deplorable. But sexist comments validated by prominent individuals reinforce the same kind of insidious thinking within our culture: That women are inherently lesser than men, or are objects for men to enjoy or control. That is what misogyny is.