If John Kerry abhors those who use violence against innocent people, why is he seeking advice from Henry Kissinger? 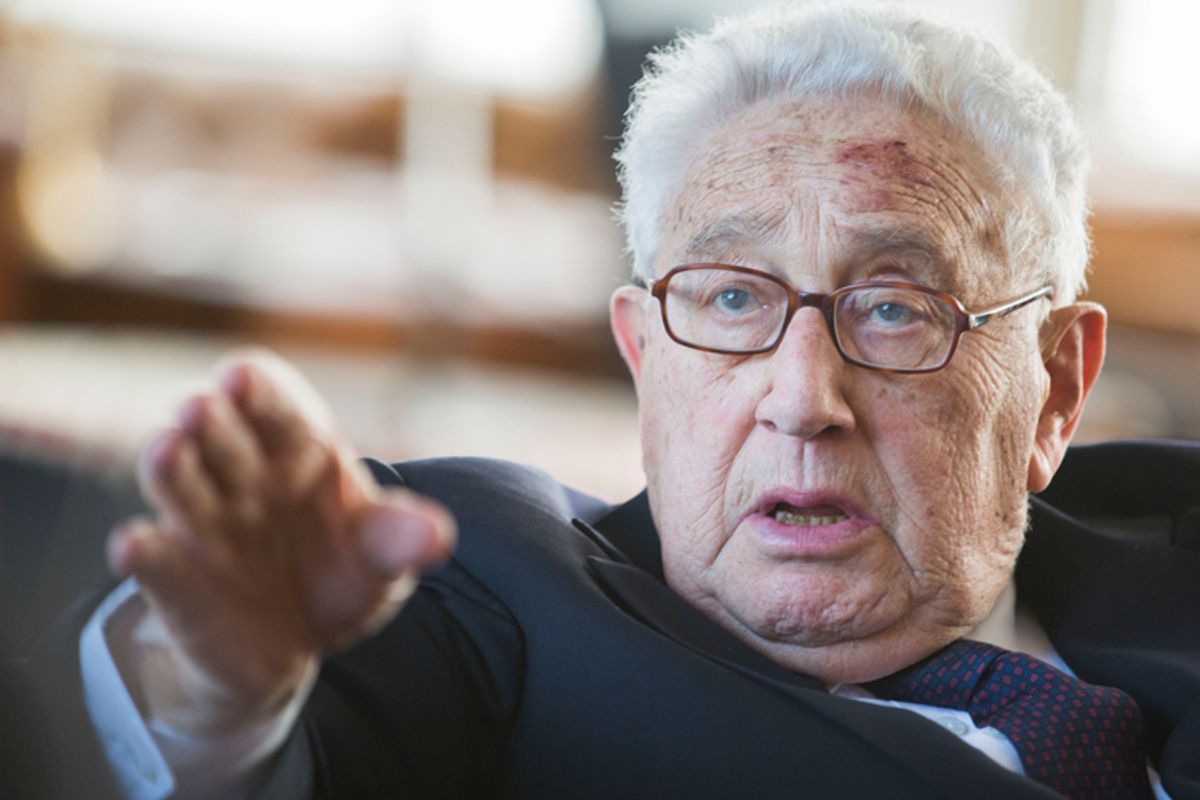 “As a father, I can’t get the image out of my head of a man who held up his dead child, wailing, while chaos swirled around him,” said Secretary of State John Kerry during an emotional address late last month about the use of chemical weapons in Syria.

After speaking in such strong moral terms against people who use violence against innocents, why is Kerry seeking advice about Syria from Henry Kissinger today?

Kerry was scheduled to meet with the former secretary of state for a “one-on-one,” seeking Kissinger’s counsel on the way forward with respect to Syria.

But the former secretary of state is far from an advocate for humanitarian intervention. On the contrary, during his time in government, he was responsible for aiding and abetting massive human rights abuses. These range from backing military campaigns that involved mass rape in Bangladesh, to masterminding the secret and illegal carpet bombing campaign against Cambodia, to plotting a coup in Chile that overthrew a democratically elected leader and installed a right-wing despot who tortured and killed political opponents.

Speaking of the coup in Chile, Kerry’s timing couldn’t be worse. Today is the 40th anniversary of that coup, which took place on that country’s Sept. 11 – in 1973.

“I don't see why we need to stand by and watch a country go communist due to the irresponsibility of its people. The issues are much too important for the Chilean voters to be left to decide for themselves,” said Kissinger at the time of the coup.

Kerry has an even more personal reason to not seek Kissinger’s counsel today than his complicity in human rights abuses in Latin America or South Asia. As mentioned, the secretary of state first made his name in politics by testifying before the Congress on the horrors of the war in Vietnam in 1971. At the time, Kissinger was a national security adviser to President Nixon.

Nixon and Kissinger found Kerry’s testimony to be troubling for the war effort. In a conversation between the two, Kissinger said it was an “outrage” that Kerry and the other Vietnam Veterans Against the War were getting national media attention, and said that he was sure “a significant percentage are phonies.”

It was easy for Kissinger to malign the service of Vietnam veterans from his comfortable position in Washington. Just a few years earlier, in 1968, he helped scuttle peace talks that could have ended the war. This extension of the conflict cost tens of thousands of American lives and the lives of over a million people in Indochina.

For his complicity in crimes abroad, Kissinger is celebrated at home but has restricted travel abroad. He faces an extradition request in Uruguay and has dodged questioning by a number of countries in Europe, including France.

Today, as Kerry makes eloquent arguments that American credibility is on the line if it does not hold those who murder innocents accountable, he should first think about the credibility the U.S. loses by continuing to embrace men like Kissinger for whom no dictator was too brutal to support nor no massacre too bloody to cover up.