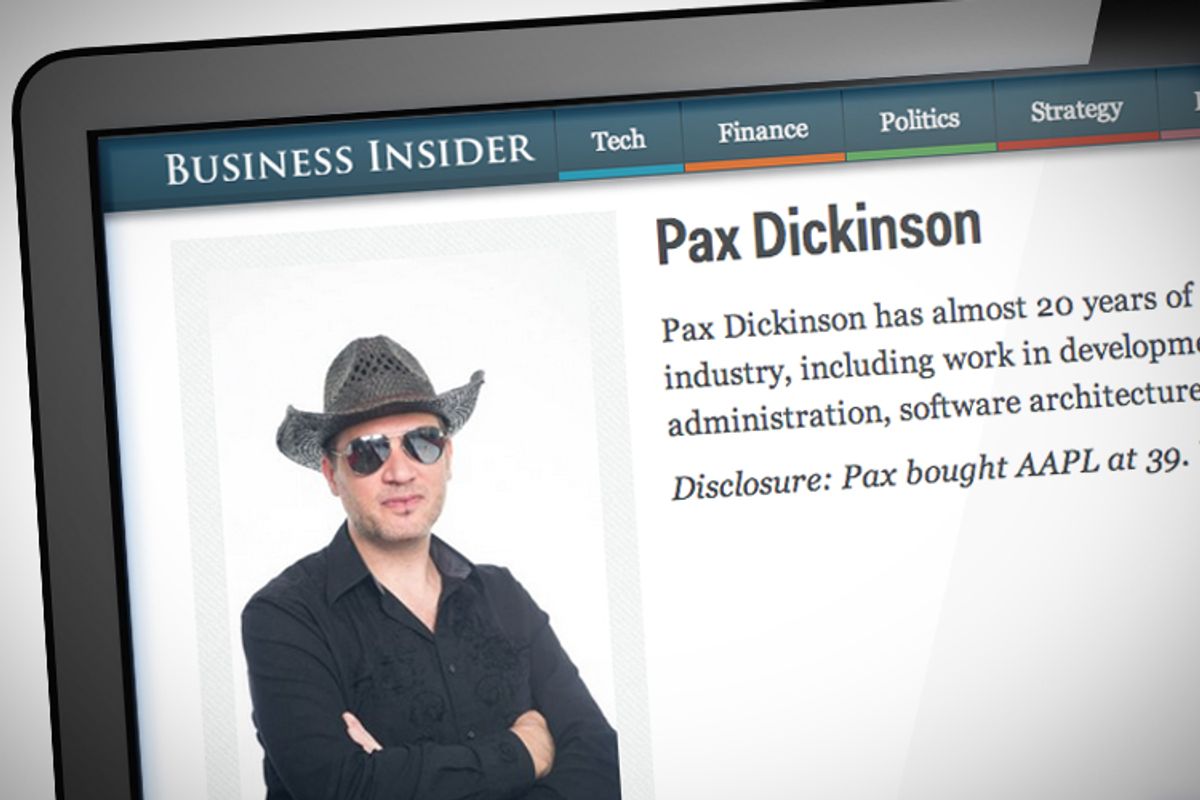 On Monday, Valleywag called attention to the Twitter account of Business Insider’s CTO, Pax Dickinson, pointing out his brazen prejudice. I’m not talking about an “I regret my poor phrasing” single point of failure, this is a multi-year parade of racism, sexism, classism, transphobia, homophobia and rape culture. “Well-rounded bigot” indeed.

Dickinson almost immediately positioned himself as some sort of victim, publicly labeling himself “today’s Emmanuel Goldstein” and then later changing his Twitter bio (which used to have a hi-larious fake trigger warning on it) to describe himself tragically/proudly as “the worst person in the world.”

Dickinson was a c-level officer at a large news site; media coverage of his public writing is not a pile-on of someone who, despite maybe not expecting privacy on a public Twitter account, could reasonably expect obscurity. He said himself that he’s “been expecting this to happen for a long time.” He’s not ignorant, he seems to understand how one conducts oneself professionally, and yet he chose not to do that and instead to wait for the fallout. And now it’s here.

There is a pervasive idea that people with the worst character imaginable must be tolerated within a company or culture because of some skill they possess. We weigh the harm these people do to those around them -- perhaps most significantly, to those not as powerful as them -- and determine that pain to be worth less than an individual’s ability to get 1,000 stars on a GitHub repo. Or whatever. This shitty math gets polished up and presented as a proud shit-badge to hang on your name tag or company website: M E R I T O C R A C Y.

Meritocracy, which is literally a joke, is not how the world works. Even if the world did work that way, “merit” means more than your ability to design an application framework (or whatever). It is about your merit as a human being, and that means empathy for others. Pax Dickinson lacks merit.

And that’s all the attention I think Pax Dickinson deserves about this, until such time as he learns a smidge more respect for people who aren’t like him. Individual assholes aren’t particularly worthy of study -- but the systems that allow them to flourish are.

So let’s talk about those systems. I have a lot of questions.

Business Insider c-level hiring committee (or whoever made the final hiring decision on who your CTO would be): How did you let this person through the door? Why did you hire him over other candidates? Did you simply quiz him on his technical skills and then draft the offer letter?

Or did you put him in an interview room with a woman, knowing that even something as simple as knowing how to talk to a woman professionally is a common stumbling block for some men in tech? (You do have women throughout your management team, right?) Did you talk to him about how seriously you take diversity at your company, and about initiatives your company takes both internally and externally to foster community, inclusion and safety for employees of all sorts of non-Pax Dickinson backgrounds? (You support those initiatives, right?) Did you have him sign your diversity policy as part of his on-boarding? (You have one of those, right?)

See, I don’t look at Dickinson and think, “Oh, poor Business Insider for hiring a stealth asshole”; I think, “Who hired this asshole? A bunch of assholes?” I am skeptical that someone so proudly, publicly bigoted didn’t wave his bigot flag occasionally at the office. And looking at how quickly Business Insider got a statement out the door about Dickinson leaving the company, it doesn’t seem like there was a lot of angst about losing the CTO.

Business Insider is not the first company to employ an asshole. And whatever sorts of contractual protections or company culture Business Insider had, it clearly wasn't sufficient for making sure the company would avoid this exact situation -- hiring someone who had to be let go as a brand embarrassment and a potential legal risk.

So if Business Insider values diversity so much, why wasn’t it evident over the course of Dickinson’s term at the company that he was not a good fit? Were his co-workers not comfortable bringing this up to (even higher) management, was management not listening, or is the rest of Business Insider’s IT department similarly bigoted? What steps is the company taking to improve its recruiting, hiring and reporting systems to make sure it doesn't keep hiring and paying people it doesn't actually want?

This isn't an outlier, it's just a more noticeable example of a systemic, ongoing problem, and I for one am tired of hearing people talk about men like Pax Dickinson as if they're grown in a cabbage patch field, instead of coming up through the same culture the rest of us live and work in. This is a problem in all tech companies, not just one of them. This is probably a problem in yours. What are you doing to solve it?

Courtney Stanton is a technical program manager, independent game producer, and interactive fiction maker based in Boston. She reads the entire internet every day and can be found writing on her blog and Twitter.