Sexy teacher fantasies are not reality

Tales of female teachers "seducing" male students are in the news again. Why are we so taken by these rarities? 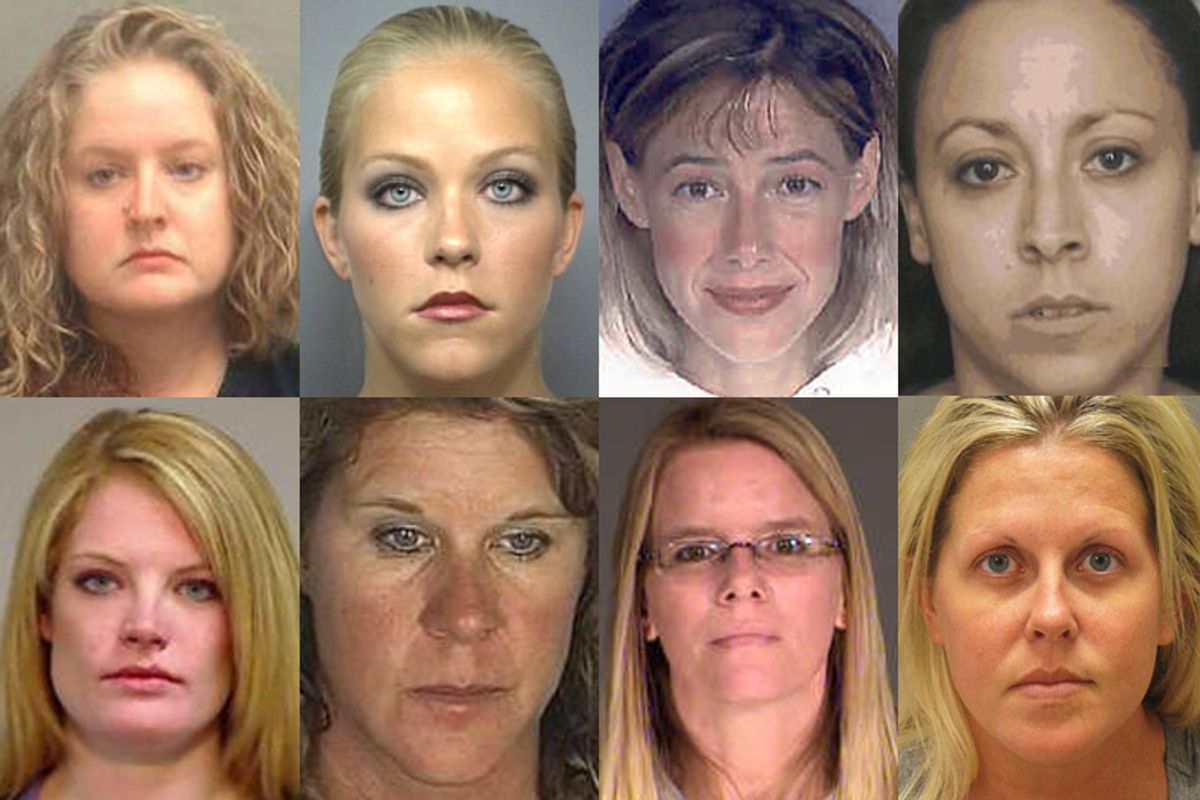 A funny thing happens when you google “female teacher.” The first page of results leads entirely to articles about female teachers abusing male students. Search instead for “male teacher” and you get a bunch of links to pieces about the lack of men in the field of education. Just one link leads to a piece about “mistrust” of male teachers (and then there’s an anomalous link to a cellphone video of a 7th grade girl “beating up” a male substitute teacher).

You should take this as a reminder to never confuse Google results with reality. Truth is, the vast majority of teachers punished for sexual abuse are men.

I offer this reminder now because stories of female teachers abusing male students are making headlines once again. Scottish teacher Eppie Sprung Dawson, 27, was registered as a sex offender after having an “affair,” as the Huffington Post puts it, with a 17-year-old male student. Now she’s making international headlines for cohabitating with that former student, who is now 18. HuffPo followed up its coverage of this story with a slideshow of educators involved in “Student-Teacher Sex Scandals,” many of which involve middle-school-age victims. Not only is the term “sex scandal” wildly problematic when it comes to sexual abuse of minors, but only three of the 42 images feature men.

It isn't just true-life tales in this realm that have captured the public's imagination, either. Consider Alissa Nutting’s "Tampa," a novel that has been declared "The Raunchiest Book of the Year," and that tells the story of a 26-year-old teacher who "seduces" her 14-year-old student. Last week saw the release of “A Teacher,” a movie about a female high school teacher who has an “affair” with a male student. As NPR put it, the film sends the message that for the male student the relationship is “destined to remain in memory as only a particularly eventful youthful tryst."

Again, though, this preoccupation does not reflect reality. An Associated Press study found that nearly nine out of 10 teachers disciplined for allegations of sexual misconduct are men, and the majority of victims are female. Female teachers may dominate both the field of education and the tabloid news -- not to mention pop culture, especially pornography -- but men account for 90 percent of teacher-student sex abuse.

So why do these stories, real and imagined, occupy so much cultural space then? For starters, they captivate because they seem bizarre. We aren't accustomed to thinking about women as sexual actors -- let alone as predators. Sex is something women give in to, it's something they dole out like doggie treats. (Or, it's simply taken from them.) That's why so many people find it hard to conceive of a boundary-crossing female teacher as an abuser. As an outrageous article in Details declared several years back, "We ought to be happy for these pubescent pioneers ... any one of those little Miss Crabtree-bagging twerps is probably being carried atop the shoulders of his classmates like some conquering hero." We are so dedicated to the primacy of male desire, and the one-way street of sex, that even when an adolescent boy is involved, many see him as a lucky little Lothario.

We're used to worrying about men, which is perhaps part of why there are countless sexy teacher Halloween costumes for women for sale -- there's even one that reverses into a sexy schoolgirl uniform (oh, the range of sexual roles afforded to women!) -- but for the life of me, I couldn't find a single sexy male teacher costume. Of course, abuse by men is eroticized plenty -- but those are the dark, socially unacceptable fantasies that are relegated to porn tube sites. It's the unthreatening fantasy of the female teacher with an unbuttoned blouse that dominates headlines and late-night talk show monologues.

This might seem like harmless cultural ephemera, but it's not. A study from the University of Buffalo found that "a female teacher with a male student was most often seen as a 'normal part of growing up,'" according to the Associated Press. That attitude appears to hold even among judge and jury: The Star-Ledger found that female teachers receive lighter sentences than male teachers when convicted of sexually abusing a student. All of which is to say that fantasies -- just as with Google search results -- may not be reality, but they certainly impact it.