The political press presents how not to cover the Syria debate

Crossfire and the Washington Post apply their usual methods to a complex crisis, with predictable results 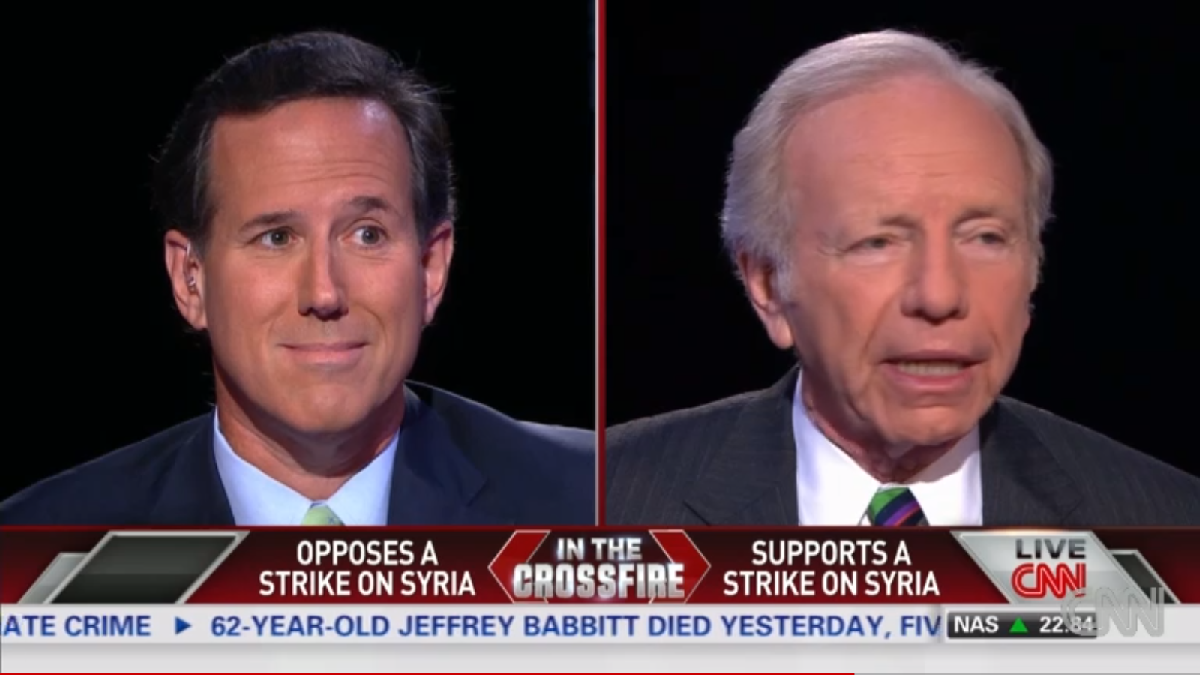 This is just about the least important thing about it, but the Syria debate has broken the political analysis game. There is a brutal civil war going on, in which a coldblooded tyrant has repeatedly targeted civilian citizens of his own nation, including with chemical weapons, and it is now probably the largest refugee crisis in modern history. And now we have, to explain this horrible situation to us, CNN's relaunched "Crossfire," the show where two liberals and two conservatives yell at each other.

Yesterday, in advance of President Obama's speech on the subject of America's potential military (or diplomatic) response to Bashar Assad's use of chemical weapons, CNN asked conservative cartoon pundit S.E. Cupp and anti-poverty and environmental activist-turned-right-wing boogeyman-turned-inexplicable pundit Van Jones to argue about Syria for an hour. They were eventually joined, for more arguing, by two former senators, Rick Santorum and Joe Lieberman.

So, representing "the right": the Rick Santorum who supported striking Syria until approximately five days ago. And representing "the left": the Joe Lieberman who supports striking Syria and basically everywhere else while we're at it. A hawk from the right and a hawk from the right-pretending-to-be-the-middle, both with essentially identical foreign policy views on every single issue besides one issue that they began to disagree about less than a week ago, representing "both sides of the debate," or "both" "sides," of "the debate." I mean, this is just useless:

The hosts are ... not competent. S.E. Cupp and Van Jones don't really know anything about foreign affairs. Like, even for television pundits they don't know much, though Cupp is much, much better at mastering her prepared sound bites. Still, two frauds like Santorum and Lieberman can run circles around either of them.

This is what happens when you try to analyze a complex political reaction to an international crisis from an idiotic partisan frame because you're CNN: The boundaries of debate on the issue are now represented by two guys who agree substantively that the United States should be bombing and invading half of the Middle East. But one of them hates the president and the other is merely disappointed in him.

And this was the much-improved night 2 of the show. Night 1 was even worse, according to the people who actually watched it. As Time's James Poniewozik noted, "Syria was exactly the kind of issue that flummoxes Crossfire’s partisan assumptions." (And the subject under discussion makes the name of the show, and its underlying "politics-as-war-but-fun" metaphor, even more obscene.) At least night 2 had a co-host from the left who is vaguely skeptical of military intervention.

It's not just bad TV punditry that is completely ill-equipped to handle a conflict that doesn't neatly slide into a "left-wing Democrats versus right-wing Republicans" framework. The Washington Post's nonpartisan political columnist Dana Milbank has been doing his best with what he's got, but as a guy whose job is basically to make fun of how ridiculous the entire political game is without ever betraying any sort of point of view, it's really hard for him to write about Washington's Syria debate without just sputtering nonsense.

On Sept. 9, Milbank covered a Susan Rice speech to the New America Foundation. Milbank's column is an easy "this thing looks like that thing" piece: Susan Rice used talking points before and it was a big scandal. Susan Rice used talking points again -- can you believe these amateurs didn't learn their lesson??? The two things actually don't resemble each other at all, but Milbank does his best. Sure, he's comparing multiple appearances on widely watched national news talk shows to one little-watched speech at a think tank, and he's comparing talking points delivered in the immediate aftermath of an attack on Americans to talking points delivered in advance of a planned American attack, and also the problem with the first talking points was that they turned out to be false but we don't actually know yet whether these talking points are false, making the comparison just entirely nonsensical, but on the other hand, Rice talked funny:

Rice, two months on the job, delivered her speech in an odd cadence, as though she had been instructed not to say more than a few words at a time. In her take-no-prisoners style, she literally dared lawmakers to vote against military action:

“Every adult American. Every member. Of Congress. Should watch those videos. For themselves. See that suffering. Look at the eyes. Of those men and women. Those babies. And dare to turn away. And forsake them.”

We'll take your word for it on that talking funny, I guess, because no one watched this speech.

In today's column, partly about Obama's speech last night, Milbank declares that the president "was often at odds with himself" in his address, then quotes some examples, then immediately grants that "these are not all contradictions" because the president was trying to outline "a highly nuanced and frequently shifting policy." Still, you know, if you ignore that little detail, it makes great column material: "But nuance can sound a lot like a muddle." Yes, and if you just decide to take as reductive and simplistic an interpretation of everyone's behavior and motivations as possible, they will sound pretty dumb!

There is this awful word, "snark." It just means "sarcasm," though it is exclusively used derogatorily these days. People accuse other people of being "snarky" or using "snark" and all it means is "being sarcastic in a way I don't like." I think there's rather a lot of evidence to support the idea that irony can be used in the support of a message, as a rhetorical tool to convince, or to expose frauds as frauds. That requires a point of view, though. And Milbank is basically prohibited (it is a self-imposed prohibition, really, but still) from having a point of view. So it's just empty, meaningless sarcasm, without any greater purpose to it. We have finally located that awful thing, "snark," and it turns out it was in a newspaper, and not a blog, this whole time.

These are the options the objective political press presents: No point of view beyond naked cynicism, or two dueling, equally idiotic points of view locked in a symbiotic forever argument.