The government claims NSA conducts surveillance to avert financial crises. Seems like they have the wrong suspects 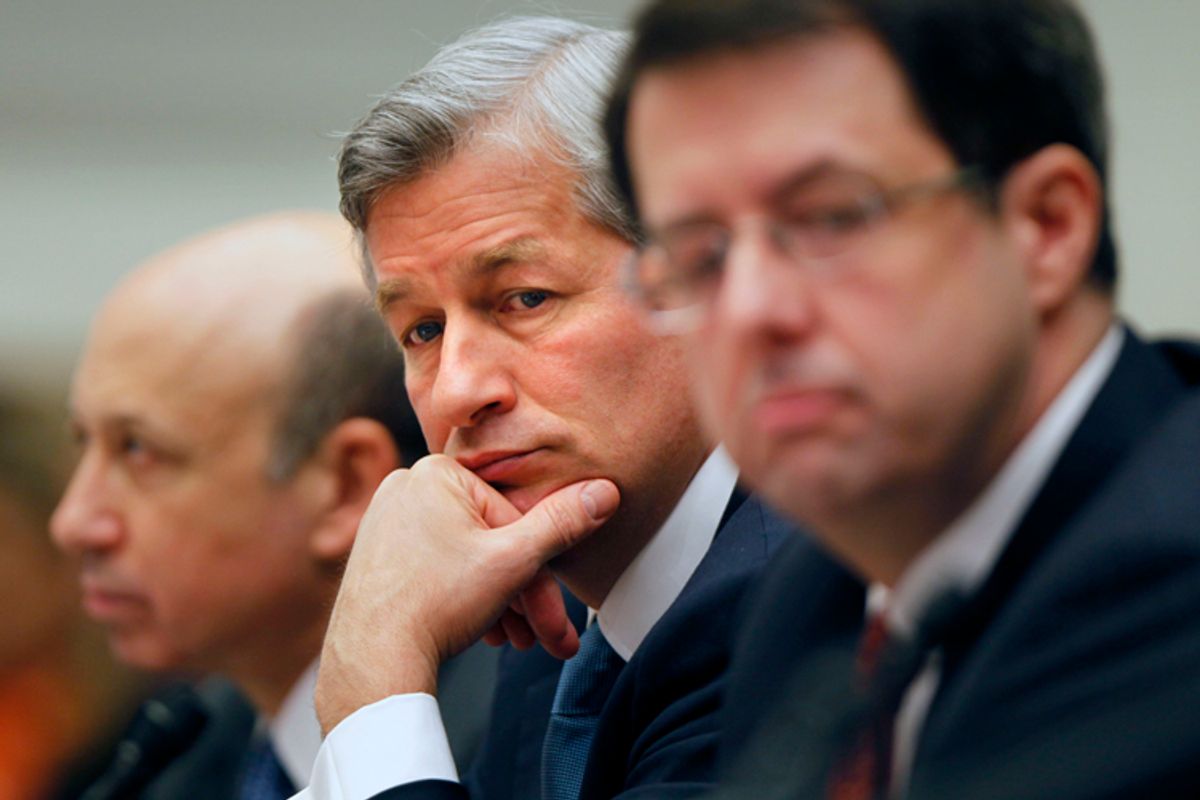 Since early June when the first stories were released, we have seen a wave of leaked information drastically change our understanding of the United States government. Its activities in intelligence gathering have been shown to be much wider than previously thought; its relationships with major tech corporations have been shown to be much murkier and of a darker nature than was publicly known.

Its relationship with the people of the United States is on shaky ground -- revelations have been met with untrue explanations time after time, each exposed as false by further leaks. One of the few things we can say for sure is that things are not as they have been presented to us, by Republicans or Democrats. More will be leaked, and it’s hard to imagine the nature of that information now.

As many have documented, James Clapper, director of national intelligence, lied directly to Congress about the nature of the surveillance the NSA was carrying out on American citizens, and came up with a series of story changes to attempt to justify them. It has been convincingly argued that he only dug the hole deeper, but those of us waiting to see him fired and prosecuted for perjury are still waiting.

Others have taken umbrage at the feigned motive of transparency behind a release of documents that had been called for by the EFF (Electronic Frontier Foundation). Most recently, Clapper responded to the revelations that the NSA has been spying on the Brazilian oil firm Petrobras by insisting that it was, despite all logical conclusions, done in the name of national security.

Clapper insisted: “It is not a secret that the Intelligence Community collects information about economic and financial matters, and terrorist financing. We collect this information for many important reasons: for one, it could provide the United States and our allies early warning of international financial crises which could negatively impact the global economy. It also could provide insight into other countries’ economic policy or behavior which could affect global markets.”

Even if we assume that this serves as a justification, which it doesn’t, his statement raises far more questions than it answers. His attempt to bring “terrorist financing” into the discussion is shameful -- there is no connection whatsoever between Petrobras and funding terrorism, and if there were, the U.S. would have been screaming about it and would have taken a completely different plan of action. So if it isn’t about terrorism, the idea that the NSA must spy on a Brazilian oil company, and on that nation’s president, Dilma Rousseff, an ally of the United States, in the name of preserving economic stability is laughable.

This is coming from the government that showed itself unable to adequately regulate its largest banks, indeed Wall Street as a whole. As a result, a completely preventable crisis rocked the world in 2008, and its repercussions continue. I should not have to remind anyone that none of those on Wall Street most directly responsible for the toxic assets and flawed attempts to mitigate risk have been prosecuted, let alone put in jail.

While the rest of the world watches in horror as the U.S. fails to regulate investment banks, and indeed we are seeing signs that another crisis would not be unforeseeable, Clapper claims that the NSA’s spying on Brazil is justified in the name of preventing a financial crisis. Not only is he continuing to lie to justify the NSA’s flagrant excesses, but we all remain at risk.

We shouldn’t stop there, then. To go down the logical path laid by Clapper’s own claims as a hypothetical exercise, why doesn’t the NSA spy on Wall Street? This could get them all the evidence they could need to successfully prosecute those responsible, and truly move toward stabilizing the economy. If any part of American society or business had shown itself to be corrupt to the core, and thus in need of surveillance, it’s Wall Street.

My answer would be it seems they don’t have to. Washington and Wall Street are so deeply intertwined that they already know what’s going on. Even if you write that off as too jaded, recent revelations have shown that the DEA in the United States has been using surveillance technology to start major investigations, before they manufacture a false evidence trail ex post facto.

I am not arguing they should expand that practice; indeed quite the opposite. I am merely asking, rhetorically, if they are willing to break the rules and "launder" evidence in this way, why don’t they go after investment banks in the same way? I think we all know the answer: Major corporations, especially banks, have fused with the American political elite. They are now scarcely separable from each other.

The legal system we have developed in this country is not perfect, but it has a series of effective checks and balances. Corrupting those checks and balances and bending the rules has the effect of eroding justice throughout the Unites States. The longer the NSA, or major financial institutions, remains above the law, the worse off we all are. James Clapper must be fired and put on trial for perjury without delay.

Michael Degerald is a PhD student and Teaching Assistant at the Jackson School of International Studies at the University of Washington in Seattle.