Why we watch shows we hate

What keeps me watching "Sons of Anarchy," or any show, after it's ceased to satisfy? And when is it time to stop? 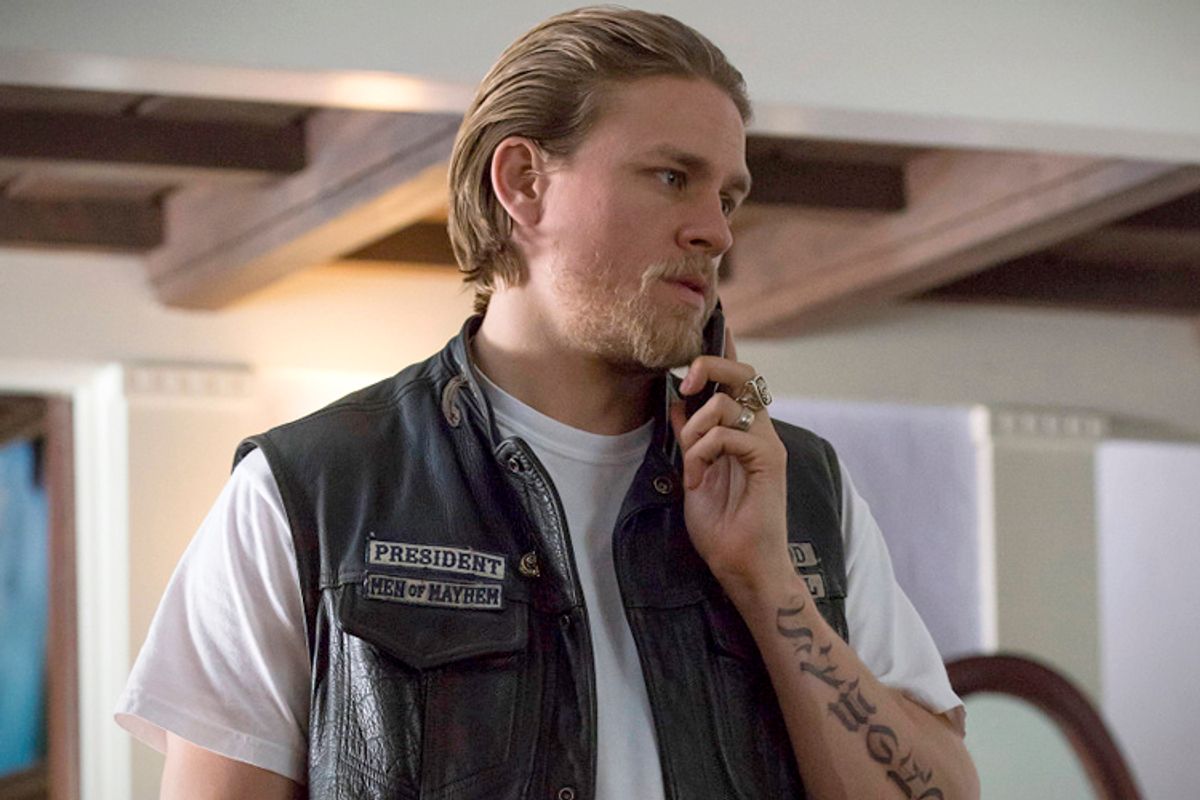 A day prior to last night's premiere of "Sons of Anarchy" on FX, I was busy compiling a wish list of ways I hoped the show would improve in its sixth season. I had not completed this list by the time the new episode aired, but it included such vague recommendations as make better use of guest actors, characters' actions should be more consistent, make better use of supporting characters, handle race better ... I was late in coming to "SOA," only by one or two seasons, but I caught up quickly, have since seen every single episode, and continue to watch faithfully. That said, I have not been happy with the show for a long, long time. Last night, I gritted my teeth through a graphic prison rape scene. I grimaced as members of the titular motorcycle club once again got embroiled in a gratuitous gross-out mission tangential to the show's overall arc. After about a half-hour, a friend who'd begrudgingly consented to watch the episode with me stood up, said simply, "This show is so bad," and walked out of the room. Why can't I do that?

In the beginning I resisted "SOA" for  purely superficial reasons. After I figured out that the show was, in fact, not a spinoff of "Dog the Bounty Hunter," I refused to give it a chance because it centered around the long-haired, leather-clad members of a motorcycle club.  I read that as "Aryan biker gang." Visions of Altamont danced in my skull. Don't scoff. Who but the most open-minded pop culture consumers among us hasn't Heisman'ed a film or TV program because we thought we might not relate or that it might, god forbid, offend our most delicate sensibilities? Think back to when you thought you knew what "The Wire" was about -- or "Cougar Town"!

As often happens, "SOA" was eventually strongly recommended to me by one trusted source or another. I quickly came to discover that the fictional town of Charming, Calif., while anything but, was home to a compelling and reasonably colorful cast of characters. The show had flaws like most other ambitious ventures on television from "Sex and the City" to "Six Feet Under" to "Spartacus," but it presented a world so unfamiliar to me as to be fascinating. To some extent, what initially repelled me ultimately drew me in.  We all know criminals trump heroes these days and an acceptable level of darkness reigns. But these bikers were corrupt and violent and sexist and racist! At least in the beginning, they also felt human. I became very invested in the show.

Unfortunately, as with many relationships, the little things that bothered me about "SOA" in the beginning only grew more disturbing. More and more, characters seemed to make erratic decisions that served the plot but not, ultimately, the world. (I don't want to get into spoilers for the uninitiated, but Opie sacrificing himself for a club that had given him nothing but heartbreak seemed to me an unforgivable breach of believability.) Also, episodes more frequently veered off from the overarching story into unconvincing episodic adventures that felt a little like the Hell's Angels meet the Keystone Cops. And, while "Sons" consistently attracts great underappreciated talent like Adam Arkin, Harold Perrineau and Jimmy Smits, it has yet to make the most of these guest arcs. Poor Donal Logue emerges this season as an inexplicably nudist heroin addict. Where is that going?

And then there's the race thing. I get that the small-minded members of this provincial motorcycle gang see African-Americans and Mexicans as monolithic adversaries. Hell, it kind of makes me chuckle how the Sons often refer to any group of black people -- big or small, on bikes or in prison -- as simply "black." This week's episode featured a sneering clan of Persian pornographers -- the only significance of their ethnicity being, perhaps, a nice alliterative effect. I've grown tired of waiting for the writers to use that small-town, small-minded context as an opportunity to break out one character -- an African-American, a Mexican, the first Pakistani in Charming, whatever -- as a fully realized individual and not simply a temporary ally (i.e., pawn) or an object of opposition. Oh, wait. There's Juice, the club member whose most significant goal thus far was keeping the rest of the Sons from discovering that he is half black. (When they found out, they didn't much care. That was really confusing.)

I write all this not to influence other viewers to abandon "Sons of Anarchy." It's a TV show, for crying out loud. If you like bikes, by all means, roll with it. My point is that I, personally, have many reasons, established over time, to give up on the program. And yet I still watch -- as I said in the first paragraph -- faithfully. Once you're pulled into a thoroughly imagined universe, whether it be Charming or Stars Hollow or Lena Dunham's Brooklyn, it becomes hard to detach yourself. But why spend time in a place you no longer enjoy? At what point does it stop being entertainment? Maybe when you get more of a kick out of your own grousing than what's on the screen -- I'm not sure. It's a testimony to the thrill I felt when I first tuned in that I will probably watch "Sons" until, at least, the end of this season. I hold out hope that the show will pick up a little. But even if it doesn't, I'll try to complain less. And in the meantime, I've started watching "The Bridge" on the same network. I've only seen one episode, but I've got my fingers crossed.