John Boehner's party is flailing. He should fund the government, end sequestration and raise the debt limit already 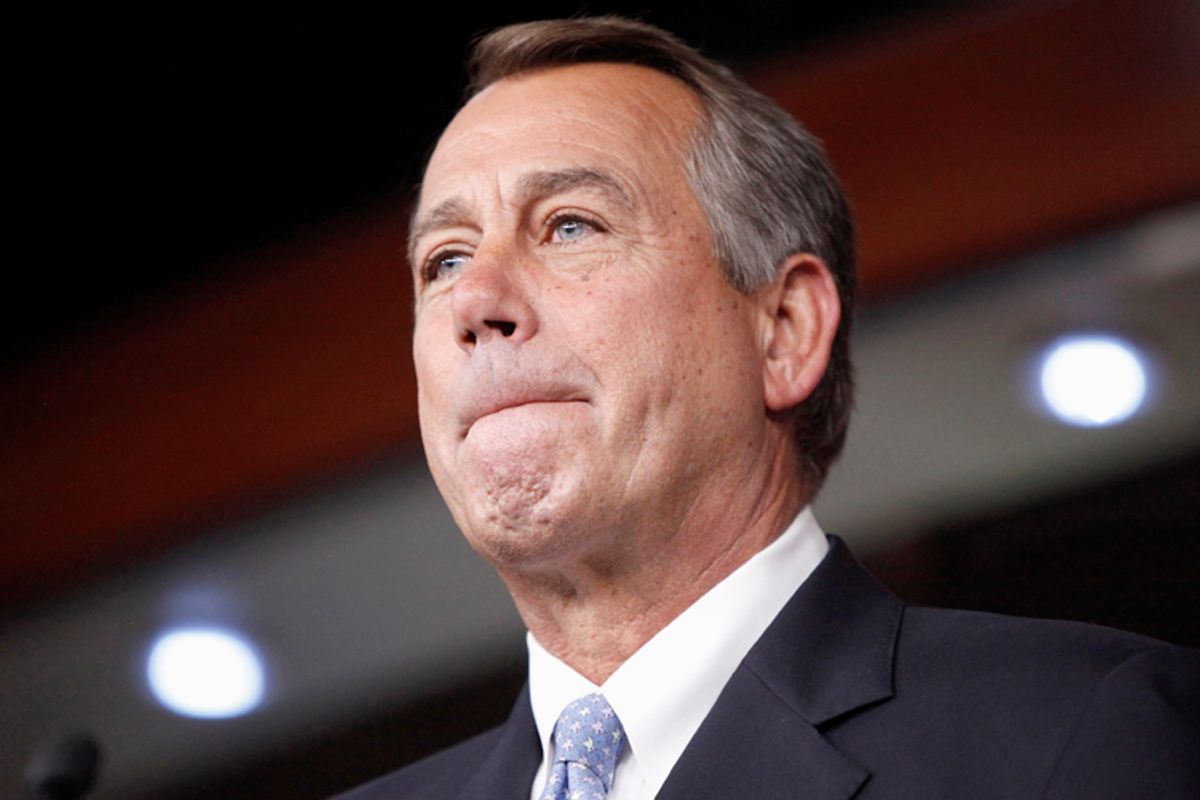 House Speaker John Boehner needs to admit to himself what almost everyone else in the country came to terms with months ago.

Serially picking fights with the Senate and White House over the budget is really dumb. It's bad for the country and the economy for obvious reasons. It's no longer a fruitful way for Republicans -- who only control the House of Representatives -- to achieve significant policy objectives. It remains an effective way to undermine the public's faith in Congress and the government, which Republicans like, but it reduces their own party's favorables more than the Democrats'. And at this point they're doing much more internal harm to themselves than anyone else.

Indeed, routine budget fights have unified Democrats and are hastening the GOP crackup. Just yesterday, House GOP leaders fumbled (yet) a(nother) bill because the GOP is too divided over budget policy and strategy to pass anything other than completely suicidal legislation without Democratic votes.

So here's a humble suggestion, which I'm borrowing from pundits obsessed with magical presidential powers they're convinced can solve any problem: It's time for John Boehner to lead.

Let's quickly take stock: First, there's no concession Republican hard-liners want that Senate Democrats and President Obama are willing to give them in exchange for fulfilling the mundane tasks of funding the government and avoiding a catastrophic default on the national debt. Second, Boehner doesn't want to shut down the government or default on the national debt. Third, points one and two mean Republican hard-liners are going to be upset with the outcomes of budget fights no matter how frequently they happen. Fourth, the more of them there are, the more paroxysms the right will suffer, and the more fractured the GOP conference will become.

Which brings us to an obvious solution: John Boehner should work with Democrats to fund the government and extend the debt limit for a very long time. In exchange, Democrats should agree to give him nothing. He'll walk away with a clear schedule and some much-needed peace of mind. If everyone wants to be melodramatic, Democrats could promise to get Boehner's back if rank and file Republicans attempt a mid-session coup.

Boehner could do this one of a few ways. If he wanted to be grudging about it, he could propose to increase (or extend) the debt limit through the midterm elections or the next presidential election or whenever, and to fund the government with a genuinely clean continuing resolution until the end of the next fiscal year.

That's not a great way to go about governing, though. It's better than what we have. But budgeting with continuing resolutions means Congress can't adjust accounts to reflect the most current needs of agencies across government. It'd also do nothing to address sequestration, which would continue to cut indiscriminately into funding for just about everything the government does.

So a better plan would be for Boehner to agree to temporarily or permanently turn off sequestration, and maybe even work on a full-year omnibus appropriations bill. He could do this for free if he wanted to. But if he decided replacing sequestration with higher deficits would get him defenestrated, he could pick from a menu of options.

He could strike a deal the White House badly wants to raise taxes and cut entitlement spending, and use the deficit savings to turn off sequestration.

He could strike a smaller deal with the White House that raises fewer taxes and cuts less popular spending (like farm subsidies) and use the deficit savings to pay down part of sequestration.

Or if he's done working with the White House on the budget, and wants to kill two birds with one stone, he could agree to pass the Senate immigration bill and turn off sequestration at the same time. It turns out the immigration bill's 20-year deficit impact is about the same as the 10-year (and thus 20-year) deficit impact of sequestration. For good measure, he could throw in the deficit-reducing Senate farm bill, which at least offers conservatives some punitive cuts to nutrition assistance for poor people.

That last option looks best to me, and would have the added benefit of clearing Congress' entire plate for more than a year. That means more time for golfing, smoking and planning for the future, less time for stressful, economically destructive budget fights.

If you think I'm completely nuts, let's take a quick look at the alternative.

On top of revealing how hollow the right's deficit hysteria is, this is all extremely stupid. When it fails, we'll be a month deeper into the year, and Boehner will have to settle for a fig leaf followed by a replay in early 2014. It's much stupider than my plan for him to wipe the budget slate clean, pocket immigration reform and spend the next year evaluating career options.

Who knows? Maybe he'd even get elected speaker again. Either way, it's time for John Boehner to lead.