"Mother of George" actress: "I abhor how Africa is treated as one village"

Danai Gurira on "The Walking Dead," growing up in two countries, and the challenges "Mother of George" faced 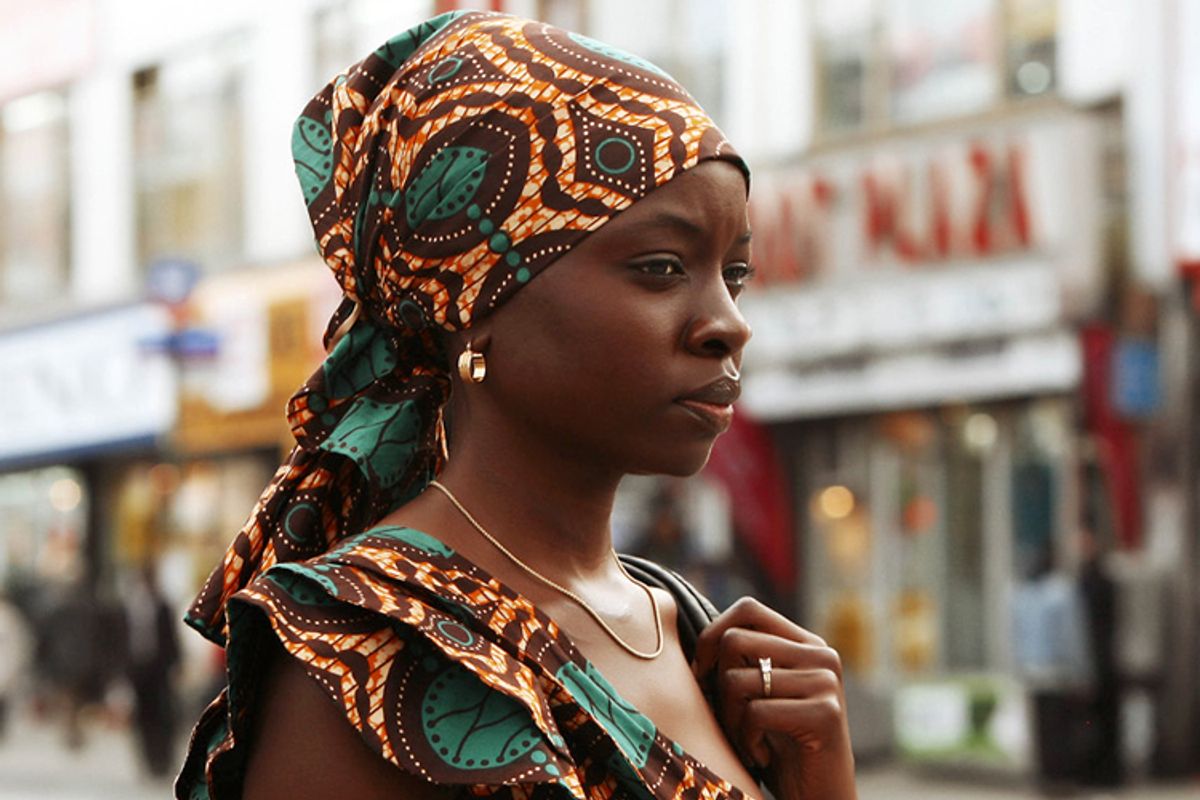 Danai Gurira in "Mother of George"
--

Fans of one of cable's biggest franchises are about to see a much more personal side of a key star.

Danai Gurira has appeared as sword-wielding zombie-fighter Michonne on the apocalyptic splatter-drama "The Walking Dead" since 2012. But this week sees the release of "Mother of George," in which she plays a much quieter role, as a Nigerian immigrant in Brooklyn, N.Y., struggling with fertility and with the push and pull of old and new culture.

The African immigrant experience, even after the success of African-American-themed films in recent memory, is a tough sell -- and one about which Gurira is particularly passionate. The Iowa-born actress spent much of her childhood in Zimbabwe and speaks fluent Shona; in an interview with Salon, she lamented the general view of Africa as a monolithic place and described just how long the process is of putting together even a low-budget film about the African experience. "But you hear George Clooney, even, talk about how it's difficult to get stuff made that he believes in," she said. "Maybe it'll always be tricky."

Tell me a little about the process of researching this film.

It was a lot of different things. Of course I was connected to [director Andrew Dosunmu] and the costume designer -- they're both Nigerian, and I saw a bit of the Nigerian community in Brooklyn through them. I spent time in those communities doing research on the film -- documented research you can visually see -- then spent time with the mother-in-law of one of Andrew's dear friends, taking care of her grandchild in Harlem. Spending time with a woman from Nigeria, in the U.S. -- that was perfect. She was definitely my key. She also did all the cooking.

You're a child of immigrants who's American -- is there a pull between the two countries?

Hey! My childhood was in Zimbabwe. Don't take away my childhood years. Yes, I was born in the U.S., went to college in Minnesota -- the Midwest. But when I went to college, I thought I knew America; after all, I was born here, my siblings were born here. I thought I knew America, and when I got back I realized I didn't know it, I had to really define who I was. I was going to retain a strong and consistent connection to Zimbabwe. That's my home. I embrace the U.S. as a home. I'm involved in my organization there and things like that. I do feel that it was crucial to retain my connection to my other home. That's where I kind of find myself. When I'm there, I think that I can't wait to eat McDonald's -- but you come back and realize that it isn't good! There were so many virtues to where I came from.

It's interesting that you're from one nation in Africa and play a character from another -- particularly in light of the fact that many news stories or novels will specify, say, European nations but treat "Africa" as a single country.

I enjoy exploring the cultural specificity of the different parts of the continent. I abhor how Africa is treated as one village. I love the exploration of a different kind of person from the person I grew up with. The difference between the Yoruba and the Shona -- Shona weddings don't look like that, with the beautiful cloth. All the components of the marriage, they pray for her and bless her, the groom has hands put on him by the elders, it's gorgeous! And we don't have any of that! What's wrong with us? We have a little traditional marriage in a living room with tea and cake after. We're very, very different. The Yoruba are probably more colorful among Africans. And [for the Shona] the British have still not left and that affects us a lot.

What were the challenges of getting a film with this subject matter made?

This was in the works forever. When the screenwriter was connected with Andrew, it went to Sundance and was workshopped there. They were never getting the budget they needed. "We can't make it for that," they said, "and if we can't make it for that, we shouldn't make it." They did [independent film] "Restless City" [instead]. That was a beautiful idea -- it allowed them to show their aesthetic, and the idea of telling an African story on American soil.

From that, then some funding kicked in for them to do their baby. It was a brilliant strategy. I'm a playwright and I discussed a screenplay idea in an office, but it's a very, very different story when it's about an African female protagonist. They say it'll be very tough to make. And this was jut a couple weeks ago! I told them it's been done. And it'll be done again. That's what's exciting about "Mother of George." It breaks the precedents of showing great stuff can be made where the protagonist and cast are African, but it's still an American film. That is possible. That is visible with this project. But you hear George Clooney, even, talk about how it's difficult to get stuff made that he believes in. Maybe it'll always be tricky.

As a whole, we're seeing films with black folks in the lead that are beautiful films. "The Butler," "Beasts of the Southern Wild," "Fruitvale Station" -- there's stuff happening around the black story that's very exciting. You can't argue with the success of these films. Come on, guys! Obviously this works. The next step is letting the immigrant African story be told this way.

Has your role on "The Walking Dead" made projects in which you're involved any more bankable?

The interest in telling stories like "Mother of George" was there before Michonne. He based this on seeing me in "The Visitor." "The Walking Dead" came after I finished shooting this film. But I thought, OK, maybe this'll be easier to market! There's that leverage that comes with "The Walking Dead's" level of exposure. Happily, I'm part of a TV show people watch. I don't think I'd be pigeonholed in any way, though -- folks who know my work from stage or "The Visitor" know my work in a different way. They just think, "She's playing a chick on TV who's different from all these other chicks!"